Both Trump and the crown prince want to constrain Iran's rising influence in the Middle East. 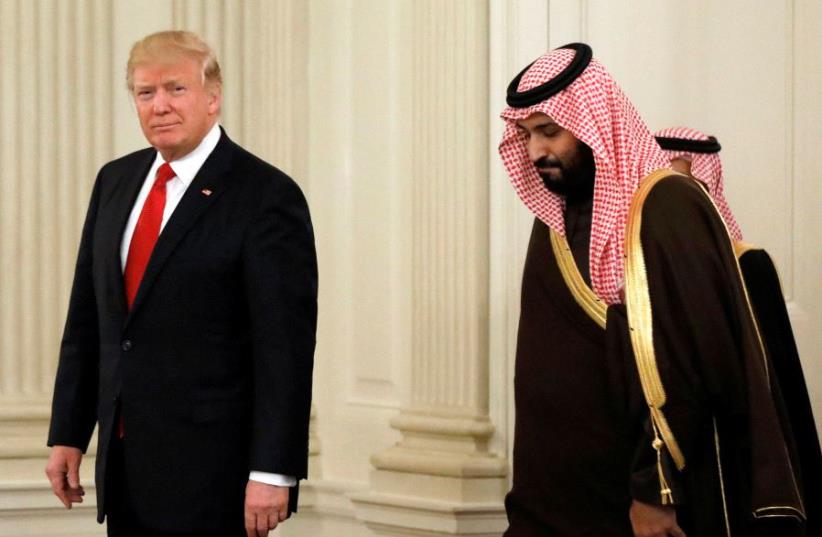 US President Donald Trump and Saudi Deputy Crown Prince and Minister of Defense Mohammed bin Salman enter the State Dining Room of the White House
(photo credit: REUTERS)
Advertisement
US President Donald Trump and Saudi Arabia's powerful Crown Prince Mohammed bin Salman on Tuesday discussed tensions with Iran and a Saudi-led military campaign in Yemen which has come under criticism in Congress.Their talks at the White House were part of the first visit by the prince to the United States since he became the heir apparent last June to succeed King Salman. Prince Mohammed has consolidated power and is likely to rule for many decades if he succeeds his father.Though the prince, 32, has won Western plaudits for seeking to ease Saudi Arabia’s reliance on oil, tackle chronic corruption and reform the conservative Sunni Muslim kingdom, the severity and secrecy of an anti-corruption crackdown last November has unnerved some investors.The prince is on a public relations blitz while traveling in the United States, with stops in New York, Boston, Seattle, Los Angeles, San Francisco and Houston.Trump and the crown prince underscored the strength of US-Saudi ties which suffered under the Obama administration. Saudi Arabia, a decades-long US ally, felt neglected by President Barack Obama's pursuit of a 2015 nuclear deal with Iran, Riyadh's regional rival.Sitting side by side in the Oval Office, Trump said, "We've become very good friends over a very short period of time," and produced charts to show the depth of Saudi purchases of US military hardware and what he said were the number of American jobs they are providing."The relationship now is probably as good as it's really ever been and I think will probably only get better - tremendous investments made in our country and that means jobs for our workers," Trump told reporters during a picture-taking session with the crown prince.Prince Mohammed, in a rare foray into speaking English in public, praised the US-Saudi alliance.IRAN TALKSBoth Trump and the crown prince want to constrain Iran's rising influence in the Middle East. Saudi Arabia on Monday called the Iran nuclear deal a "flawed agreement," and Trump has made clear he plans to exit the agreement unless changes are made to it."We’re going to see what happens," Trump said."But Iran has not been treating that part of the world or the world itself appropriately. A lot of bad things are happening in Iran. The deal is coming up in one month and we’ll see what happens."The prince is also due to have dinner with Jared Kushner, Trump's senior adviser and son-in-law, along with Jason Greenblatt, the two point men in the Trump administration overseeing Middle East peace efforts.Prince Mohammed and Kushner have forged a close relationship, which has at times come under criticism in Washington for circumventing normal diplomatic channels.The crown prince is also due to meet with members of the US Congress, some of whom have been critical of the Saudi campaign in Yemen, particularly the humanitarian situation and civilian casualties.Senate Majority Leader Mitch McConnell praised Saudi Arabia and on Tuesday blasted a resolution against US involvement in the conflict in Yemen, which is due for a vote later in the day.Senator Bernie Sanders, a sponsor of the resolution, said the United States, a major provider of weapons to Saudi Arabia and intelligence and logistical support to the Saudis in Yemen, should not be involved in the three-year-old war that has unleashed the world’s worst humanitarian crisis.A Saudi-led coalition is fighting to counter the influence of Iran, an ally of the Houthis, who deny any help from Tehran and say they are fighting a revolution against corrupt politicians and Gulf powers in thrall to the West.A Gulf dispute pitting some Arab countries including Saudi Arabia and the United Arab Emirates against Qatar will also likely be brought up at the Trump meeting.Senior US officials say Trump wants to settle the dispute, although Saudi Foreign Minister Adel al-Jubeir has called the issue a "very small matter."Washington is the first stop of the crown prince's visit to the United States, where he will meet with US business and industry leaders to cultivate investments. The Trump administration is keen to sign multi-billion dollar deals for US firms.