Trump said that the women are a "testament to strength, faith, perseverance in the face of unspeakable adversity and challenge." 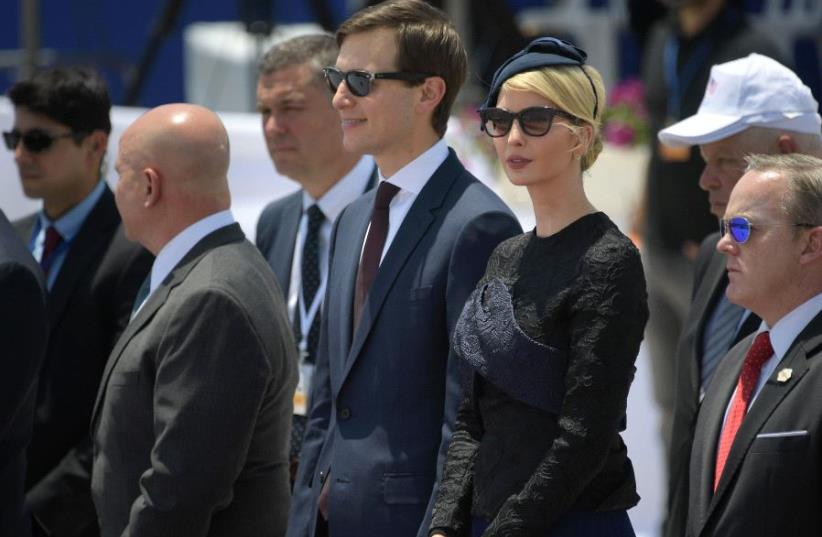 White House senior advisor Jared Kushner (C) and Ivanka Trump (2R), the daughter of US President take part in a welcome ceremony upon the US President's arrival at Ben Gurion International Airport in Tel Aviv on May 22, 2017, as part of his first trip overseas
(photo credit: MANDEL NGAN / AFP)
Advertisement
ROME - Ivanka Trump spoke with African women who were trafficked into prostitution and discussed ways to tackle the problem at a meeting on Wednesday in Rome that she described as a "privilege."The daughter of US President Donald Trump, who as a White House adviser is seen as having increasing influence, met the women while accompanying her father on his first foreign trip.On her way to the closed-door encounter, Trump said she was looking forward to hearing how the 11 women, originally from Nigeria and the Horn of Africa, had rebuilt their lives."(They) are testament to strength, faith, perseverance in the face of unspeakable adversity and challenge," she said in a leafy courtyard at the headquarters of the Sant'Egidio Christian charity and peace group, which hosted the meeting.The 35-year-old, who hosted a discussion on human trafficking last week at the White House, spoke for around 45 minutes with the women, some of whom now live under protection from the Italian judiciary after reporting their traffickers to authorities."She asked what could be done at the level of government and legislation, and how it would be possible to block human trafficking, particularly regarding women," said Daniela Pompei, who is in charge of Sant'Egidio's services for immigrants.The number of Nigerian women brought to Italy among the migrants rescued from flimsy boats launched by smugglers into the Mediterranean has increased almost eight-fold in the past three years, Sant'Egidio estimates.At least 80 percent of the almost 1,600 who arrived in the first three months of 2017 are destined to be forced into prostitution, the group says.Representatives of Sant'Egidio, which has organized the transfer of Syrian and Iraqi refugees to Italy, also held a separate meeting with Trump at which they discussed how to inform would-be migrants before they left Africa of the risks of trafficking.Along with her father and stepmother Melania, Trump met Pope Francis on Wednesday morning, and Pompei said she told the trafficking victims the pontiff was "a great advocate for your stories."