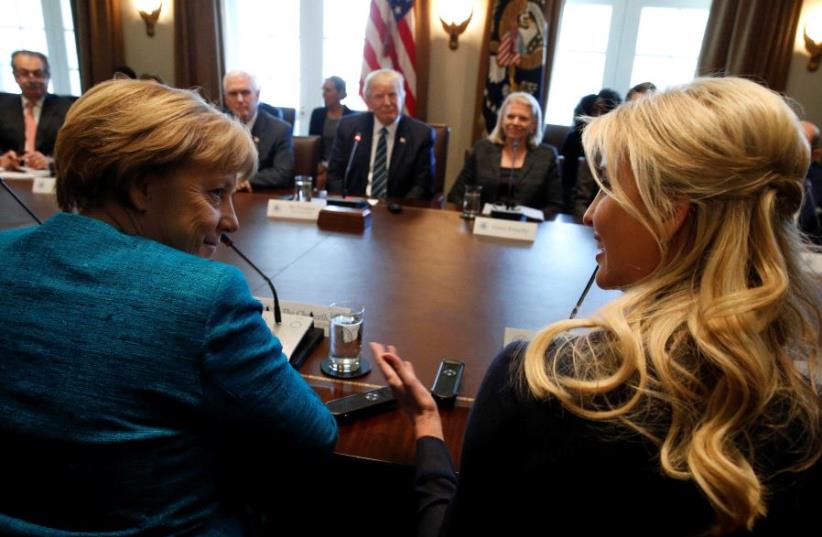 Germany's Chancellor Angela Merkel (L) and Ivanka Trump speak during a roundtable discussion between U.S. President Donald Trump and German and U.S. business leaders on vocational training at the White House in Washington, March 17, 2017
(photo credit: REUTERS)
Advertisement
German Chancellor Angela Merkel's staff has reportedly invited Ivanka Trump to visit the European country on an official White House visit, according to Der Spiegel on Saturday.  According to the German report, Merkel extended the invitation to US President Donald Trump's daughter and unofficial administration advisor last week during Merkel's trip to Washington. The first daughter's slated trip to Germany would reportedly include tours led by business executives of local vocational training centers.
Germany"s Angela Merkel on two-state solution to Israeli-Palestinian conflict (Reuters, March 2017)
There was no initial mention of the date for the potential trip. Earlier in March, the US president welcomed Merkel for a White House meeting that was focused on the future of the transatlantic alliance and shaping the working relationship between two of the world's most powerful leaders.The new US president and the long-serving stateswoman, whose country is Europe's largest economy, discussed funding for NATO and relations with Russia in their first meeting since Trump took office in January.The two leaders held a round-table meeting with US and German business leaders to compare and share ideas about vocational training in their respective countries. Ivanka was also present at the meeting.

Honored to join @realDonaldTrump, Chancellor Merkel and CEOs of US and German companies in a robust discussion on #WorkforceDevelopment pic.twitter.com/dJnrLpqcYF
— Ivanka Trump (@IvankaTrump) March 17, 2017


The eldest Trump daughter recently received approval for an office in the White House West Wing, stepping up her highly visible role in helping advise her father.A White House official last Monday confirmed reports that Trump's 35-year-old daughter would be getting her own West Wing space, as well as access to classified information and a government-issued phone.She is not expected to have an official title and will not be paid a salary.Ivanka Trump will be joining her husband, Jared Kushner, who is a chief adviser to the president and is a regular presence at his father-in-law's side.When Kushner's job was announced earlier this year, aides said Ivanka would not take on a role in her father's White House but would focus on settling her family in Washington.The businesswoman and mother of three practices Orthodox Judaism, to which she converted before marrying Kushner in 2009. Reuters contributed to this report.
Advertisement
Subscribe for our daily newsletter