“It would be very nice to see if he can bring his negotiating skills to the Middle East." 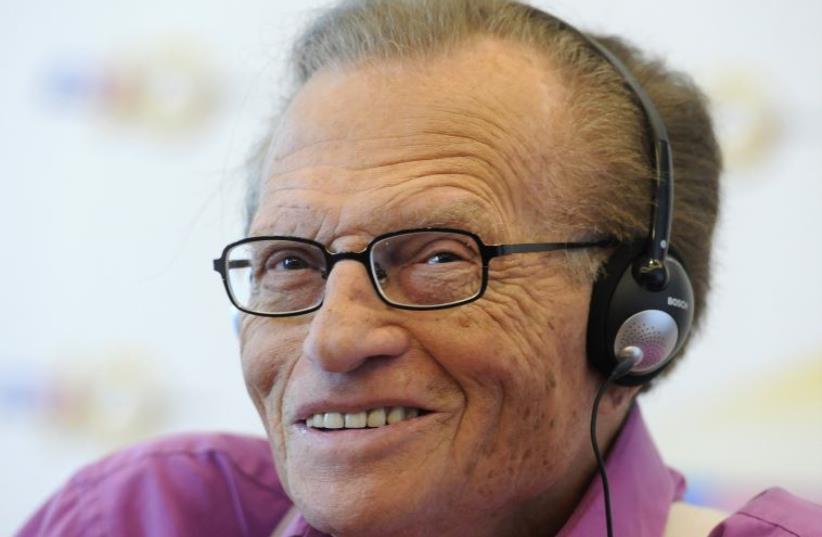 Larry King
(photo credit: REUTERS)
Advertisement
“I’ve known Donald Trump for 35 years and I was shocked that he was elected. I think he was shocked that he was elected.”The irrepressible 83-year-old Larry King was speaking on the phone in his trademark staccato delivery, with a still-prominent New York accent despite having relocated to California decades ago.“We’ve spent many hours together and I’ve interviewed him probably at least 30 times. And I consider him a friend of mine. But I did not vote for him – I told him that,” added King.“I always thought that he was a moderate liberal, and he’s disappointed me with some of the things he’s doing. I always thought he was for the single parent, equal rights for women, pro-choice.”The veteran journalist, known for his trademark suspenders and light interview style, will have the tables turned on him when he’s honored at The Jerusalem Post Conference in New York on May 7 with a Lifetime Achievement award for his decades-spanning career of journalistic excellence. Editor- in-chief Yaakov Katz will present the award and query King on his life, his views of his Judaism and Israel and the world leaders he has met and interviewed.King, who began his career in Florida in the 1960s, rose to prominence in the 1970s with an all-night national radio show in the US. He catapulted to international fame when he joined CNN in 1985 and began hosting his popular nightly interview program, which continued until 2010.In 2012, King launched his own web series in a similar vein to his CNN show, called Larry King Now. The web series is available on Ora TV, Hulu and RT America. Returning to Trump, King said he was confused by the president’s recent offensives in Syria and Afghanistan.“I think the Syrian response was correct, but I don’t know what the policy is now. The relationship between the US and Russia is strained. I’ve interviewed [Vladimir] Putin twice and I think that he’s a tough and challenging leader. He certainly wanted Trump to win, but I don’t know if he’s disappointed in that now. I don’t know what to make of the Trump-Putin relationship, I don’t understand it."“Overall, the Trump presidency is a tough read. Day to day, everything changes. It’s almost like, ‘Who did he talk to last?’ I’d say it’s an up-in-the-air presidency that shows his lack of political experience.”Despite his skeptical outlook on Trump, King said that he would like to see Trump achieve results in efforts to resolve the Israeli-Palestinian conflict.“It would be very nice to see if he can bring his negotiating skills to the Middle East. He couldn’t negotiate our healthcare, but I want him to succeed. I hope he can bring the sides together,” he said.When asked what he would ask the seven Israeli government ministers that he would be sharing the stage with at the Post conference in New York, King said he would focus on why it’s taking so long to achieve a peace agreement.“It’s an eternal question, and one that Bill Clinton once told me might be unsolvable, but I just don’t understand why people can’t get along,” he said.“I love being Jewish and am proud of my Jewishness, and I love Israel. But in 60 years of broadcasting and asking questions, I still don’t understand prejudice and why people kill each other.“We have such a limited time on Earth, why in so little time would we waste energy or lose life over hating each other. It’s insanity. Fighting over land is nuts, and it overwhelms me how far we’ve advanced technologically but so little on the human side. I’ve interviewed just about every major religious leader in the world except the pope and nobody has been able to answer that question.”King has posed his own questions and answered some of them on his active Twitter feed, which boasts almost 2.8 million followers. His feed includes mostly pithy observations – “a compendium of thought,” as he describes it – in the vein of the “My Two Cents” columns he’s written over the years in USA Today and the Miami Herald.Although he has embraced the technology that enables him to reach a wide audience, King said that he remains a Luddite within the dizzying social media universe.“I still have a flip phone, and I miss using a typewriter,” he said. “I have an addictive personality and I know that if I had a smartphone, I would be addicted. Everyone I know that has one, including my wife, can’t go for a minute without checking it.“That’s why I dictate my tweets when I feel there’s something I want to say. But I don’t read them. I can’t get them on my phone.”