"This broadcast is being watched live by millions of Americans, and around the world in more than 225 countries that now hate us, and I think that is amazing." 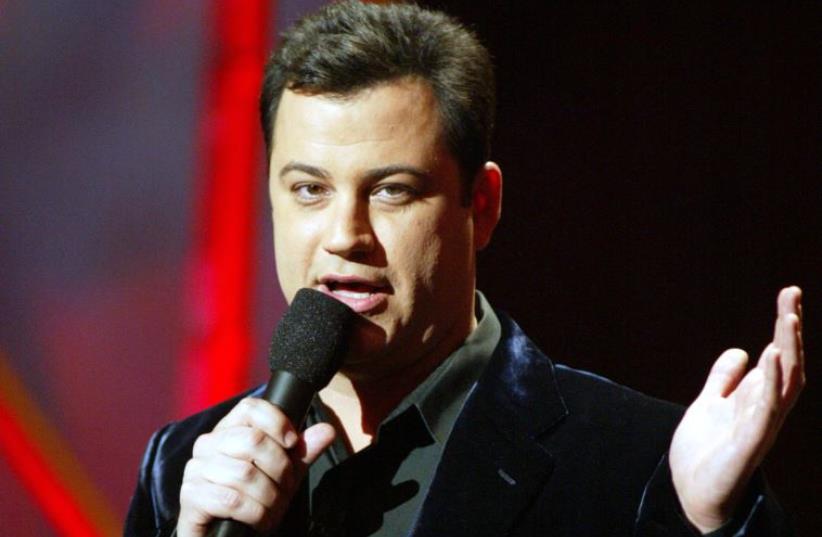 Jimmy Kimmel
(photo credit: REUTERS)
Advertisement
LOS ANGELES - Comic Jimmy Kimmel opened Sunday's Oscars show seeking to break the tension among jittery nominees by poking deadpan fun at the political tumult roiling the United States and the globe during President Donald Trump's early weeks in office."This broadcast is being watched live by millions of Americans, and around the world in more than 225 countries that now hate us, and I think that is amazing," the late-night television star exclaimed shortly after stepping onto the stage of the Dolby Theatre in Hollywood.Admitting he was at a loss in using his Oscar platform to help unite a divided country, Kimmel exhorted viewers to make an effort at reconciliation by reaching out to political adversaries they knew personally and to "have a positive, considerate conversation, not as liberals or conservatives, as Americans."
"Moonlight" wins award as best picture after Oscar flub
"If we could all do that, we could make America great again," he said, an allusion to Trump's own campaign slogan.After segueing into a gag about trying to heal his long-running faux rift with actor Matt Damon, Kimmel turned back to Trump with a sly parallel between the criticism both the president and the Oscars have taken for a perceived lack of racial sensitivity."I want to say, 'Thank you, President Trump,'" he said. "I mean, remember last year when it seemed like the Oscars were racist?" he asked rhetorically in a reference to the #OscarsSoWhite controversy that clouded the Academy Awards in 2016.The joke drew hearty laughter and applause from the star-studded audience in the hall, recognizing a renewed measure of racial balance in the awards after two straight years in which all the major acting categories shut out nominees of color.Kimmel capped his monologue with a deliberately back-handed tribute to perennial Oscar nominee Meryl Streep, whose fiery denunciation of Trump from the stage of the Golden Globe Awards in January drew an angry Twitter retort from Trump calling her "one of the most over-rated actresses in Hollywood.""From her mediocre early work in 'The Deer Hunter' and 'Out of Africa' to her underwhelming performances in 'Kramer vs. Kramer' and 'Sophie's Choice,' Meryl Streep has phoned it in for more than 50 films over the course of her lackluster career," Kimmel declared.He then noted that Streep stood Oscar-nominated for the 20th time in her career - as best actress for "Florence Foster" - before asking her to stand up and take a bow to a standing ovation. "The highly overrated Meryl Streep, everyone," he said.The pointed political barbs stood in sharp contrast to the breezy opening song-and-dance number led by Justin Timberlake, performing the Oscar-nominated song "Can't Stop the Feeling" from the animated film "Trolls." The performance brought the celebrities in the theater to their feet dancing.As the assembled nominees and other stars took their seats again, Timberlake welcomed Kimmel out to the stage."Oh good, I got a sitting ovation," Kimmel remarked dryly. "This is my first time here, and the way you people go through hosts, it's probably my last time here. So I'm going to enjoy this while I'm here."Kimmel, 49, was tapped to host the Oscar telecast, widely regarded as the most thankless job in Hollywood, after two stints as master of ceremonies for television's Primetime Emmy Awards, most recently in 2016. He also has hosted the American Music Awards.A 14-year veteran of ABC's "Jimmy Kimmel Live!", he is the third star of late-night broadcast TV to preside over Hollywood's highest honors, following in the footsteps of Johnny Carson of NBC's "The Tonight Show" and Kimmel's personal hero, David Letterman, then host of the CBS "Late Show."