Pence during visit to DMZ: When it comes to N. Korea, 'all options are on the table' 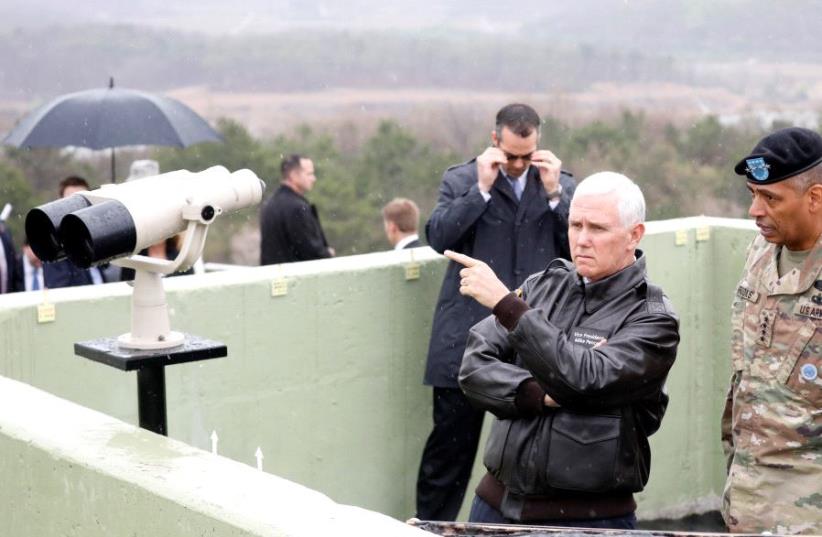 US VP Mike Pence at the DMZ.
(photo credit: REUTERS)
Advertisement
US Vice President Mike Pence said on Monday that in dealing with the ever pressing need to denuclearize the Korean Peninsula, "all options are on the table." The American vice president made this firm statement while visiting the demilitarized zone (DMZ), the highly-fortified border between the two Koreas. The DMZ is 250 kilometers long and features defensive structures, guard posts and mines all along it. Pence's remark as well as his official visit to the volatile border zone come a single day after North Korea had attempted to carry out a missile test and failed, with the missile exploding upon launch according to South Korea and the US. CNN has sited US officials as saying that the missile in question did not have intercontinental capabilities. Pyongyang's increased military action as well as it nuclear armament and recent series of nuclear experiments have played a significant role in bringing Pence to the region. Standing along the DMZ, Pence described the border as a "frontier of freedom" and also said that the US "has always sought peace through strength and my message here today... standing with the courageous soldiers from the Republic of Korea is a message of resolve." Pence's words echo those of US National Security Adviser H. R. McMaster, who on Sunday said that when it came to the North Korean nuclear program, "all of our options are on the table, undergoing refinement and further development." McMaster also noted that while the US hoped not to be forced to exercise its military capabilities in the region, he believed the "problem is coming to a head" and that the US is currently working on options for a variety of courses of action for US President Donald Trump to choose from should "this pattern of destabilizing behavior" continue.
North Korea says no to Iran-style deal: We won"t give up our nukes
Stressing the US's lack of tolerance for North Korea's nuclear activity, Pence said on Monday during his visit that the US "era of strategic patience" was over. Pence also reiterated the US's support of South Korea, which is especially endangered by North Korea's arms program. Following the failed missile launch on Sunday, South Korea's Foreign Ministry warned that "North Korea's... daring to fire a ballistic missile today is a show of force that threatens the whole world." Reuters contributed to this report.