Report comes amid probe of possible contacts between the Trump campaign, Russian representatives, as part of a larger probe into allegations that Moscow meddled in the 2016 presidential election. 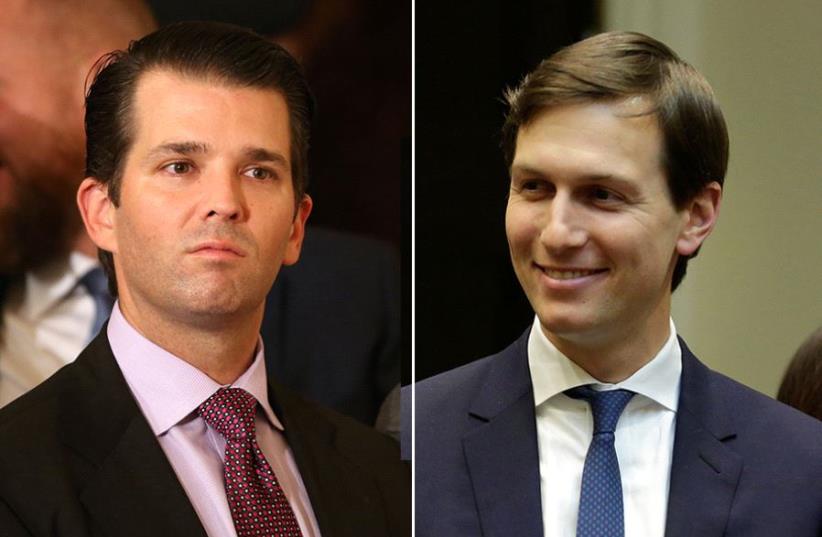 Trump Jr. and Kushner
(photo credit: REUTERS)
Advertisement
WASHINGTON - US President Donald Trump's eldest son, son-in-law and former election campaign manager met with a Russian lawyer linked to the Kremlin soon after Trump clinched the Republican presidential nomination last year, the New York Times reported on Saturday.The meeting at Trump Tower in Manhattan on June 9, 2016, was the first confirmed private meeting between members of the president's inner circle and a Russian national, the newspaper reported, citing confidential government records and interviews with people familiar with the documents.Donald Trump Jr. confirmed the get-together in a statement, describing it as "a short introductory meeting" that focused mainly on the issue of child adoption. He said he also asked Trump's son-in-law Jared Kushner and then-campaign manager Paul Manafort to take part in the meeting. A lawyer for Kushner said Trump's son-in-law "briefly attended" the meeting.A federal special counsel and several congressional committees are investigating possible contacts between the Trump campaign and Russian representatives, as part of a larger probe into allegations that Moscow meddled in the 2016 presidential election.The Times article appeared a day after Trump and Russian President Vladimir Putin discussed the allegations of election meddling during the summit of leaders from the Group of 20 major economies in Hamburg, Germany.Donald Trump Jr. said the meeting was held primarily to discuss a popular program to help Americans adopt Russian children, which the Russian government had ended."But it was not a campaign issue at that time and there was no follow up," he said in the statement. "I was asked to attend the meeting by an acquaintance, but was not told the name of the person I would be meeting with beforehand."Kushner attorney Jamie Gorelick said Trump's son-in-law "briefly attended" the meeting, adding that Kushner had over 100 calls or meetings with representatives from more than 20 countries during the campaign and post-election transition."As Mr. Kushner has consistently stated, he is eager to cooperate and share what he knows," Gorelick said in a statement.A spokesman for Manafort did not respond to a Reuters query.The Times said the Russian lawyer at the meeting, Natalia Veselnitskaya, is known for campaigning against a US law that blacklists suspected Russian human rights abusers. The law enraged Putin, who retaliated by halting American adoptions of Russian children, the newspaper reported.The Times said the adoption issue is a frequently used talking point for opponents of the US law.