Letters from rabbis, Holocaust survivors decry David Friedman's use of term against J Street ahead of his Senate confirmation hearing Thursday for the position of US ambassador to Israel. 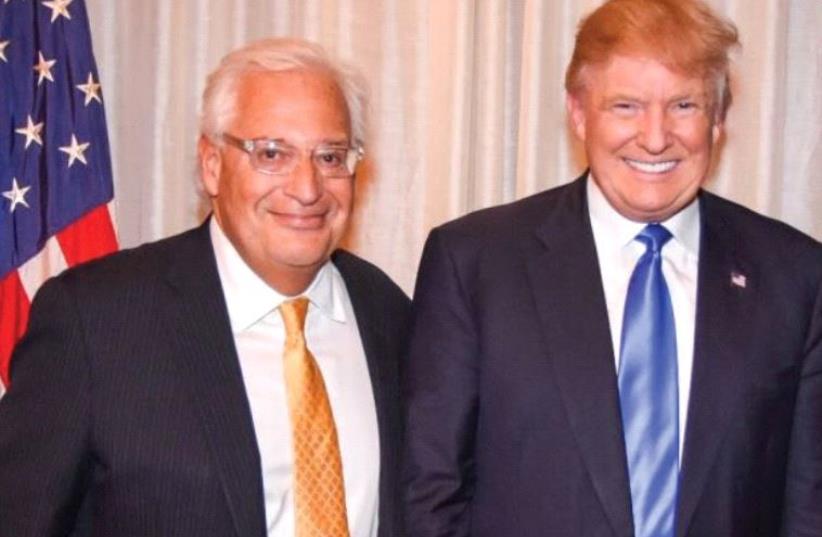 DAVID FRIEDMAN with Donald Trump in Manhattan.
(photo credit: Courtesy)
Advertisement
President Donald Trump’s nominee for US ambassador to Israel, David Friedman, was expected to apologize at his Senate confirmation hearing Thursday for contentious past remarks he made about the liberal Jewish lobbyist group J Street, The New York Times reported Tuesday.According to representatives of the bankruptcy lawyer and long-time Trump confidant, Friedman was planning to apologize for comments he made last summer, in which he said J Street supporters were "worse than kapos," in reference to Jewish concentration camp prisoners who worked for the Nazis during WWII. Friedman has reportedly relayed his intention to express regret over the remarks to officials including Maryland Senator Benjamin Cardin, the senior Democrat on the Foreign Relations Committee.
J Street President Jeremy Ben Ami discusses David Friedman and Trump policy on Israel (credit: TOVAH LAZAROFF)
Meanwhile this week, the US Senate received letters from hundreds of rabbis, dozens of Holocaust survivors and 29 Holocaust scholars saying the use of the term “kapo” by Friedman should be a factor in considering his confirmation.An array of liberal Jewish groups organized three separate letters this week to the Senate Foreign Relations Committee: one each from rabbis and cantors, from Holocaust survivors and from Holocaust scholars. The letters will be delivered to senators on the committee before Friedman’s confirmation hearing commences.Each of the letters focuses principally on Friedman’s use of the term “kapo” to attack J Street, the liberal Jewish Middle East policy group. Friedman wrote last June that supporters of the group are “worse” than kapos, whom he defined as “Jews who turned in their fellow Jews in the Nazi death camps.”The letters from the rabbis and the cantors, which has accrued more than 600 signatures from clergy of all streams, and from 31 Holocaust survivors urge the committee to reject Friedman.The Holocaust scholars, including a handful not based in the United States, stop short of a call to reject Friedman, but say: “We hope that you will keep Mr. Friedman’s disrespectful and politically cynical use of the Holocaust in mind as you consider his nomination to serve as our ambassador to Israel.”“The historical record shows that kapos were Jews whom the Nazis forced, at pain of death, to serve them in the concentration and extermination camps,” the Holocaust scholars say.“These Jews faced terrible dilemmas, but ultimately were made into unwilling tools of Nazi brutality. To brand one’s political opponents, members of one’s own community, as kapos, merely for engaging in legitimate debate, is historically indefensible and is a deeply disturbing example of the abuse of the Holocaust and its victims for present political gain.”The survivors call Friedman’s use of the term “slanderous, insulting, irresponsible, cynical and immensely damaging to our people.”The rabbis call it the “very antithesis of the diplomatic behavior Americans expect from their ambassadors” and also focus on Friedman’s long association with the settlement movement, including major donations.“We are very concerned that rather than try to represent the U.S. as an advocate for peace, Mr. Friedman will seek to mold American policy in line with his extreme ideology,” their letter says.Friedman, an Orthodox Jew and one-time president of the U.S. support group for the Bet El settlement, is a longtime friend and lawyer to Trump.Organizing the push to block his confirmation are groups that support a two-state solution and have been critical of the settlements, including J Street, Ameinu, Americans for Peace Now, the National Council of Jewish Women, the New Israel Fund, Partners for Progressive Israel and T’ruah, a rabbinical human rights group. Friedman supports expansion of settlements in the West bank “where the land is legally available” and has called the two-state solution a “damaging anachronism.”Partners for Progressive Israel, a group affiliated with leftist Zionist parties in Israel, urged its activists on Monday to call senators and voice their opposition to Friedman. On Tuesday, the New Israel Fund launched a similar appeal. “This is a nomination we have to fight,” said an email blast from Daniel Sokatch, the CEO of the group, which fund-raises for civil society and human rights groups in Israel.Friedman’s supporters include Christians United for Israel, which on Tuesday ran a full-page ad in the Capitol Hill daily, The Hill. It urges Friedman’s confirmation and was set to run Wednesday in The Washington Post.“The only serious complaint about Friedman is that some disagree with him on policy,” the ad says.“They don’t like his support for Jewish communities in the West Bank. They object to his skepticism towards a two-state solution,” it continues. “But agree or not – these views are far from extreme. Friedman’s positions represent those of a significant and growing percentage of Israelis and Americans.”Making a similar argument in a letter to the committee’s senators was the Orthodox Union, although the umbrella group stopped short of endorsing Friedman.The O.U. letter sent Tuesday noted efforts by some groups, including Jewish ones, to present Friedman’s backing for settlements and his skepticism of the two-state solution as “beyond the pale.”“We would not deny that these organizations represent the views of many American Jews and others who indeed believe in the ‘peace process’ and ‘two-state solution’ as the preferred means of resolving the conflict,” the letter said. “But there is also no denying that many American Jews — certainly in the Orthodox Union’s constituency — and other pro-Israel Americans share Mr. Friedman’s deep skepticism toward this decades-old approach which has been tried and tested and failed repeatedly to deliver security and peace to the people of Israel, the Palestinians, and the region.”