S.Korea, US warn of punishment for N.Korea; US stresses sanctions

The United States and North Korea have been stepping up warnings to each other in recent weeks over North Korea's development of nuclear weapons and missiles. 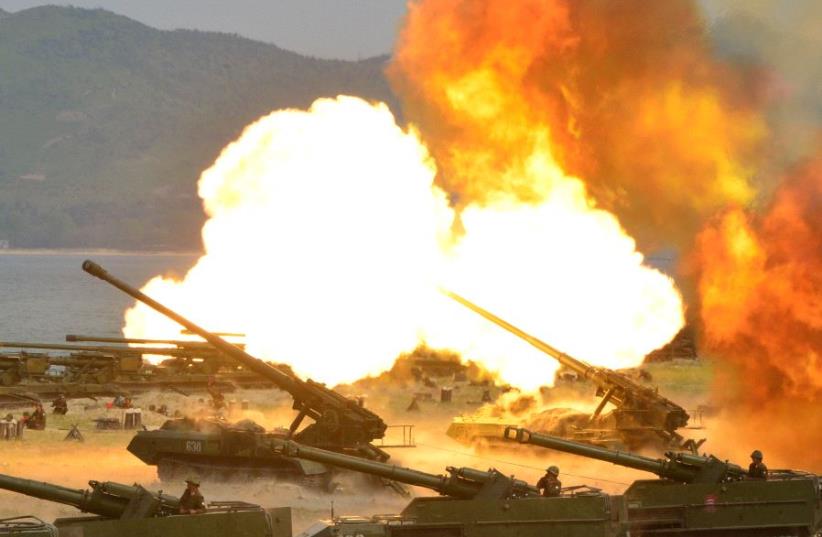 A military drill marking the 85th anniversary of the establishment of the Korean People's Army (KPA) is seen in this handout photo by North Korea's Korean Central News Agency (KCNA) made available on April 26, 2017
(photo credit: REUTERS)
Advertisement
SEOUL/WASHINGTON - South Korea and the United States agreed on Thursday on "swift punitive measures" against North Korea in the event of more provocation, although the United States signaled sanctions and diplomatic pressure were its priorities for now.
North Korea holds artillery drill as tension spikes (credit: REUTERS)
As a standoff escalated over North Korea's nuclear weapons and long-range ballistic missiles, South Korea said the deployment of a US anti-missile defense system was moving ahead effectively a day after angry protests against the battery and fierce opposition to it from China."The two sides pledged that in the event of additional strategic provocation by the North to swiftly take punitive measures including a new UN Security Council resolution that are unbearable for the North," the South's presidential office said after its national security adviser, Kim Kwan-jin, held a phone call with his US counterpart, H. R. McMaster.The United States and North Korea have been stepping up warnings to each other in recent weeks over North Korea's development of nuclear weapons and missiles in defiance of UN resolutions.North Korea's nuclear and missile threat is perhaps the most serious security challenge confronting US President Donald Trump. He has vowed to stop it from being able to hit the United States with a nuclear missile.Though it has warned "all options are on the table," Trump's administration said on Wednesday it aimed to push North Korea into dismantling its weapons programs through tougher sanctions and diplomatic pressure, and it remained open to talks.Secretary of State Rex Tillerson, Defense Secretary Jim Mattis and Director of National Intelligence Dan Coats described North Korea as "an urgent national security threat and top foreign policy priority."The US signal of a willingness to exhaust non-military avenues came as the USS Carl Vinson aircraft carrier group approached Korean waters, where it will join the USS Michigan nuclear submarine.North Korea says it needs to develop weapons to defend itself and has vowed to strike the United States and its Asian allies at the first sign of any attack on it.PROTESTSSouth Korea on Wednesday moved parts of a US Terminal High Altitude Area Defense, or THAAD, missile defense system to its deployment site, on what had been a golf course, about 250 km (155 miles) south of the capital, Seoul, signaling a faster installation of the system.Several hundred South Korean villagers protested near the site, hurling water bottles at vehicles moving the parts in.The top US Commander in the Pacific Admiral Harry Harris said on Wednesday the THAAD system would be operational "in coming days" bolstering the ability to defend the US ally and the 28,500 US troops stationed there.The United States and South Korea agreed last year to deploy the THAAD to counter the threat of missile launches by North Korea. They say it is solely aimed at defending against North Korea.But China says the system's advanced radar can penetrate deep into its territory and undermine its security, while it will do little to deter the North, and is adamant in its opposition.Influential Chinese tabloid, the Global Times, run by the Communist Party's official People's Daily, in a harshly worded editorial denounced South Korea's decision to move ahead with the THAAD deployment saying it undermined China's effort to ease tensions on the peninsula."South Korea must pay the price for its arrogance. Seoul, by turning the peninsula into a powder keg together with the North, is playing with fire," it said."But China will not lose its demeanor in the face of South Korea's maliciousness ... Although the hasty deployment of THAAD disturbs the international sanctions on North Korea, China should not send favorable signals to Pyongyang out of its anger toward Seoul."Harris scoffed at Chinese objections, saying he believed it was "preposterous" that Beijing would try to punish South Korea over a system to defend itself, and suggested China should focus on trying to influence North Korea.The front-runner in South Korea's May 9 presidential election has called for a delay in THAAD deployment, saying the new Seoul administration should make a decision after gathering public opinion and more talks with Washington.