No further talks were scheduled, a source told Reuters on Sunday on condition of anonymity. 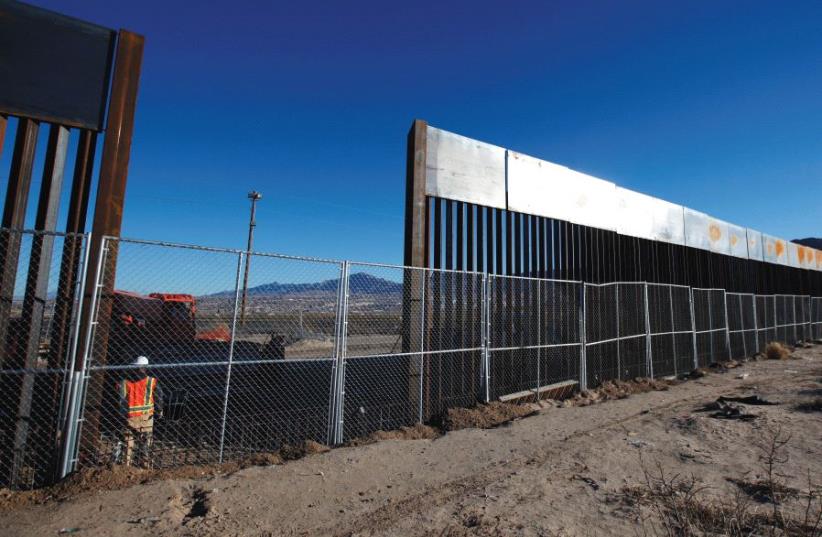 A WORKER STANDS next to a newly built section of the US border fence at Sunland Park, New Mexico, opposite the Mexican border city of Ciudad Juarez, on Wednesday. Picture taken from the Mexico side of the border.
(photo credit: JOSE LUIS GONZALEZ/REUTERS)
Advertisement
Border security talks between Republican and Democratic lawmakers seeking to avert another U.S. government shutdown on Friday have broken down over immigration detention policies, a Republican senator said."The talks are stalled right now," Republican Senator Richard Shelby told "Fox News Sunday" after a dispute over immigrant detentions. He said he hoped negotiators would return to the table soon.Efforts to resolve an impasse over border security funding extended into the weekend as a special congressional negotiating panel aimed to reach a deal by Monday, lawmakers and aides said.Democratic Senator Jon Tester played down any breakdown in talks. "It is a negotiation. Negotiations seldom go smooth all the way through," he told the Fox program. He said he was hopeful a deal could be reached.However, no further talks were scheduled, a source told Reuters on Sunday on condition of anonymity.The group of 17 lawmakers are hoping to reach a deal to allow time for the legislation to pass the U.S. House of Representatives and Senate and get to President Donald Trump by Friday, when federal funding is due to expire.Trump agreed on Jan. 25 to end a 35-day partial U.S. government shutdown without getting the $5.7 billion he had demanded from Congress for a wall along the border with Mexico, handing a political victory to Democrats.Instead, a three-week spending deal was reached with congressional leaders to give lawmakers time to resolve their disagreements about how to address security along the border.One sticking point has been Democrats' demands for funding fewer detention beds for people detained by U.S. Immigration and Customs Enforcement (ICE) than the Trump administration seeks. Republicans want to increase the number as part of their drive to speed immigrant deportations.Shelby said talks were suspended over the issue but he hoped negotiators would come back to the table soon."I am hoping we can get off the dime later in the day or the morning," he said. "We have some problems with the Democrats dealing with ICE detaining criminals ... They want a cap on them. We don't want a cap on that."While a number of Republicans in Congress have made it clear they would not embrace another shutdown, White House budget director Mick Mulvaney said he could not rule it out."You absolutely cannot," Mulvaney, who is also Trump's acting chief of staff, told NBC's "Meet the Press" on Sunday. "Is a shutdown entirely off the table? The answer is no."

Tags us gov't shutdown
Advertisement
Subscribe for our daily newsletter

Putin to hold emergency meeting on suspicious fires across Russia