"Only in America can a first-generation, Indian-American Muslim kid get on this stage and make fun of the president." 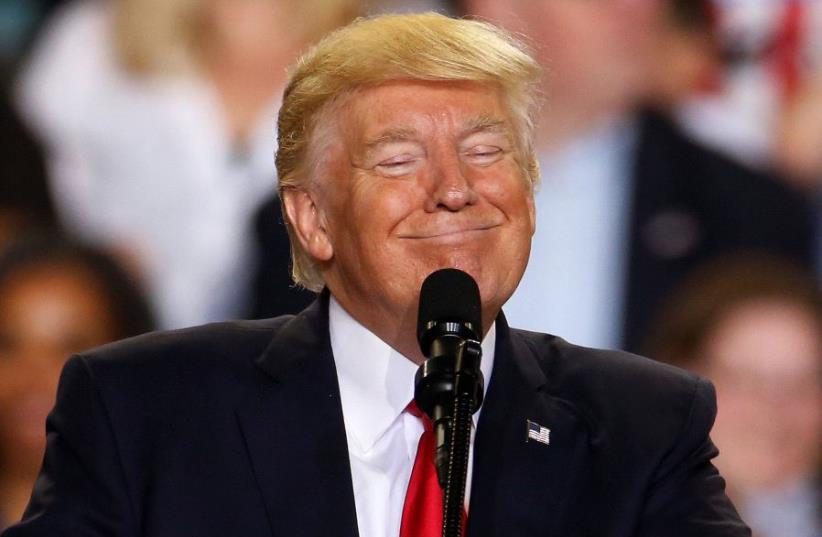 US President Donald Trump appears on stage at a rally in Harrisburg, Pennsylvania, US April 29, 2017.
(photo credit: REUTERS)
Advertisement
WASHINGTON - The White House press corps gathered on Saturday for its annual black-tie dinner, a toned-down affair this year after Donald Trump snubbed the event, becoming the first incumbent US president to bow out in 36 years.Without Trump, who scheduled a rally instead to mark his 100th day in office, the usually celebrity-filled soiree hosted by the White House Correspondents' Association took a more sober turn, even as it pulled in top journalists and Washington insiders.Most of Trump's administration also skipped the event in solidarity with the president, who has repeatedly accused the press of mistreatment. The president used his campaign-style gathering to again lambaste the media."I could not possibly be more thrilled than to be more than 100 miles away," he told a crowd in Harrisburg, Pennsylvania, calling out The New York Times, CNN and MSNBC by name.In Washington, WHCA President Jeff Mason defended press freedom even as he acknowledged this year's dinner had a different feel, saying attempts to undermine the media were dangerous for democracy."We are not fake news, we are not failing news organizations and we are not the enemy of the American people," said Mason, a Reuters correspondent.Instead of the typical roasts - presidents of both parties have delivered their own zingers for years - the event returned to its traditional roots of recognizing reporters' work and handing out student scholarships as famed journalists Bob Woodward and Carl Bernstein presented awards."That's not Donald Trump's style," NBC News' Andrea Mitchell told MSNBC, referring to the self-deprecating jokes presidents in the past have made despite tensions with the press.Instead, the humor fell to headline comedian Hasan Minhaj."Welcome to the series finale of the White House correspondents' dinner," Minhaj, who plays a correspondent on Comedy Central's "The Daily Show" program, told the crowd.He also joked about Trump, despite organizers' wishes, saying he did so to honor US constitutional protection of free speech: "Only in America can a first-generation, Indian-American Muslim kid get on this stage and make fun of the president."
In a video message, actor Alec Baldwin, who has raised Trump's ire playing him on NBC's "Saturday Night Live" program also encouraged attendees.Few other celebrities graced the red carpet, although some well-known Washingtonians, such as former Secretary of State Madeleine Albright and Republican Representative Darrell Issa of California, appeared.Trump attended in 2011, when then-President Barack Obama made jokes at the expense of the New York real estate developer and reality television show host.In an interview with Reuters this week, Trump said he decided against attending as president because he felt he had been treated unfairly by the media, adding: "I would come next year, absolutely."In Pennsylvania, Trump told supporters the media dinner would be boring but was noncommittal on whether he would go in 2018 or hold another rally.Late night television show host Samantha Bee also hosted a competing event - "Not the White House Correspondents' Dinner" - that she said would honor journalists, rather than skewer Trump.