The resolution warns that the decision has only benefitted American enemies Syrian President Assad, ISIS, Russia and Iran, according to CNN. 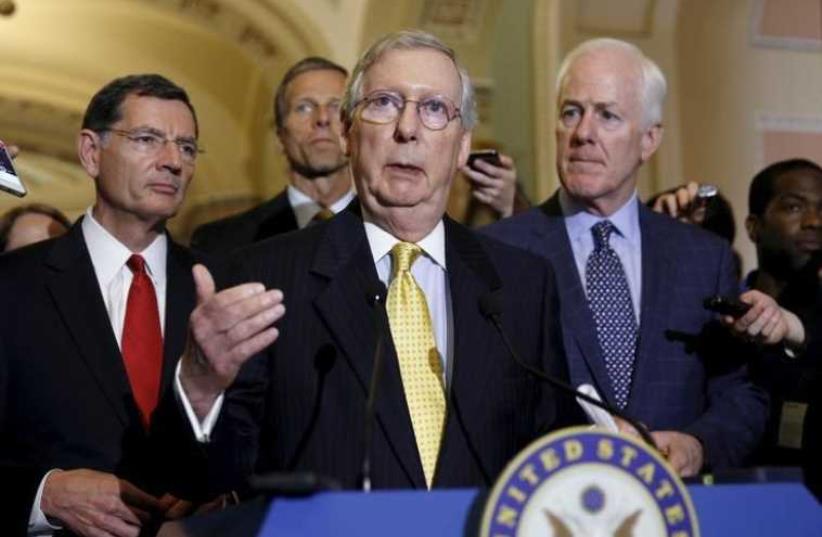 Senate Majority Leader Mitch McConnell speaks to reporters following the weekly policy lunch at the US Capitol in Washington
(photo credit: REUTERS)
Advertisement
Senate Majority Leader Mitch McConnell and other influential Republican senators introduced a new resolution on Tuesday opposing President Donald Trump's withdrawal from Syria.The resolution warns that the decision has only benefitted American enemies Syrian President Assad, ISIS, Russia and Iran, according to CNN. "If not arrested, withdrawing from Syria will invite more of the chaos that breeds terrorism and creates a vacuum our adversaries will certainly fill," McConnell said. He continued to say that if the President doesn't stop the withdrawal of troops Russia "will gain more leverage" in the region, Iranian forces will be able to get more access to "strategic corridor that runs all the way from Tehran to the very doorstep of Israel" and Assad's regime will be able to "reassert its oppressive control" over the entirety of Syria. McConnell also asked Trump to rescind his invitation to Turkish President Recep Tayyip Erdogan to the White House until a better cease-fire agreement is made between Turkish and Kurdish forces along the border. The resolution will require the President to first report to Congress that ISIS and al-Qaeda forces have been defeated "before initiating any further significant withdrawal" of US forces from the Middle East. "Congress has a voice," said Burr, a Republican from North Carolina. "And now is the time ... to exercise it."Richard Burr, Senate Intelligence Committee Chairman, said Congress wasn't able to discuss or work out any disagreements before the president made his decision to withdraw troops. Turkey has led an invasion into Syria to force out the Kurds since Trump's announcement. Lawmakers from both sides of the aisle have protested the decision to remove the troops from Syria. In the house, 354 voted against the pullout and 60 voted in favor. However, their have been disagreements in Congress over how to pressure the administration and how to convince Turkey to keep the ceasefire and retreat from Syria. McConnell has urged Congress to consider repercussions of punishing a NATO ally and cautioned Congress to think about whether the sanctions would hurt US companies or its allies. However, Democratic Sen. Chris Van Hollen, from Maryland, said the ceasefire will end and Erdogan "has said he will resume the slaughter of our allies, the Syrian Kurds, and will engage in ethnic cleansing. He continued to say, "we need to impose bipartisan sanctions now."