Obama's office did not immediately respond to a request for comment. 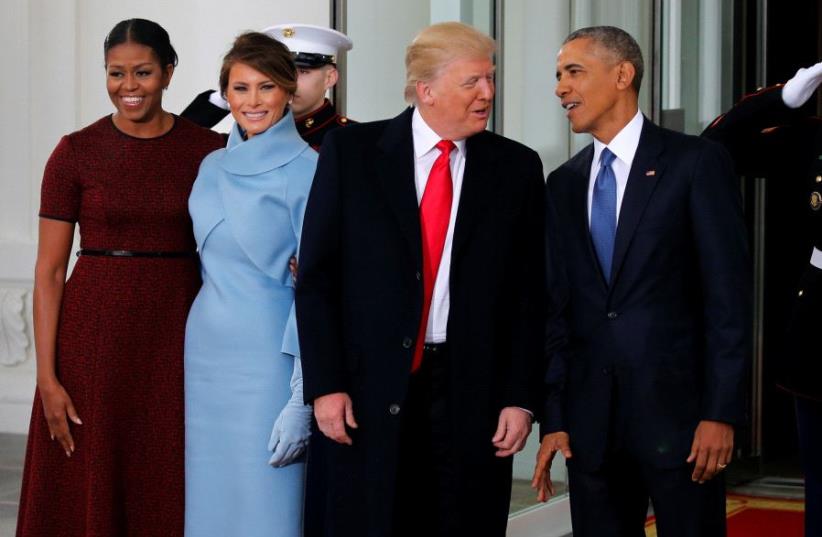 US President Barack Obama (R) and first lady Michelle Obama (L) greet US President-elect Donald Trump and his wife Melania for tea before the inauguration at the White House.
(photo credit: REUTERS)
Advertisement
WASHINGTON  - US President Donald Trump on Saturday accused former president Barack Obama of wire tapping him in October during the late stages of the presidential election campaign, but offered no evidence to support the allegation."How low has President Obama gone to tapp my phones during the very sacred election process. This is Nixon/Watergate. Bad (or sick) guy!," Trump said in a series of Tweets on his Twitter account early on Saturday.

How low has President Obama gone to tapp my phones during the very sacred election process. This is Nixon/Watergate. Bad (or sick) guy!

In one of the Tweets, Trump said the alleged wire tapping took place in his Trump Tower skyscraper in New York, but there was "nothing found."

Terrible! Just found out that Obama had my "wires tapped" in Trump Tower just before the victory. Nothing found. This is McCarthyism!

Trump's administration has come under pressure from FBI and congressional investigations into contacts between some members of his campaign team and Russian officials during his campaign.Obama imposed sanctions on Russia and ordered Russian diplomats to leave the US in December over the country's involvement in hacking political groups in the Nov. 8 US presidential election.Trump's national security adviser, Michael Flynn, resigned in February after revelations that he had discussed US sanctions on Russia with the Russian ambassador to the United States before Trump took office.Flynn had promised Vice President Mike Pence he had not discussed US sanctions with the Russians, but transcripts of intercepted communications, described by US officials, showed that the subject had come up in conversations between him and the Russian ambassador.Trump has often used his Twitter account to attack rivals and for years led a campaign alleging that Obama was not born in the US. He later retracted the allegation.Obama spokesman denies Trump claim of wiretap order A spokesman for ex-President Barack Obama on Saturday responded to the claim, denying President Donald Trump's allegation that the former president ordered a wiretap of him last October.Obama spokesman Kevin Lewis said: "A cardinal rule of the Obama administration was that no White House official ever interfered with any independent investigation led by the Department of Justice."He added, "As part of that practice, neither President Obama nor any White House official ever ordered surveillance on any US citizen. Any suggestion otherwise is simply false."
Advertisement
Subscribe for our daily newsletter