To the surprise of many, US President Donald Trump chose to release the emails himself in yet another development in the 'Russian affair.' 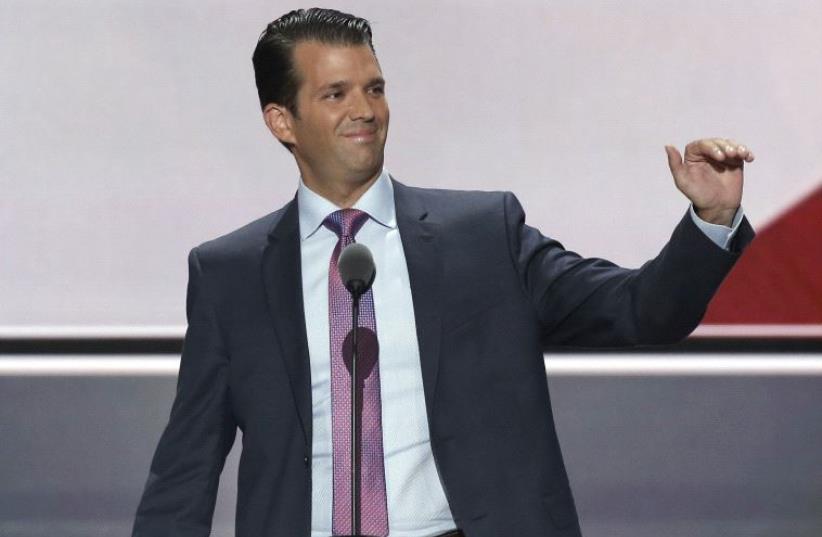 Donald Trump's son Donald Trump Jr.
(photo credit: REUTERS)
Advertisement
President Donald Trump's eldest son eagerly agreed last year to meet a woman he was told was a Russian government lawyer who might have damaging information about Democratic White House rival Hillary Clinton as part of Moscow's official support for his father, according to emails released on Tuesday.The emails, released by Donald Trump Jr., are the most concrete evidence yet that Trump campaign officials welcomed Russian help to win the election, a subject that has cast a cloud over Trump's presidency and spurred investigations by the Justice Department and Congress.The messages show that the younger Trump was open to the prospect of "very high level and sensitive information" from a Russian attorney that a go-between described as "part of Russia and its government's support for Mr. Trump" ahead of a meeting on June 9, 2016.

Here's my statement and the full email chain pic.twitter.com/x050r5n5LQ


"If it's what you say I love it," Trump Jr. responded. He released the messages on Twitter after the New York Times said it planned to write about them and sought comment from him. The messages indicate that Trump's campaign manager at the time, Paul Manafort, and son-in-law Jared Kushner, now a top White House adviser, also planned to attend the meeting with Russian lawyer Natalia Veselnitskaya, who denies having Kremlin ties.Trump Jr. said Veselnitskaya did not provide any damaging information about Clinton at the meeting and instead sought to discuss Russian sanctions."In retrospect, I probably would have done things a little differently," Trump Jr. said in an interview on Fox News. "For me, this was opposition research."
Trump responds to reports of interference with Russia on Twitter, Jan. 11, 2017
Nevertheless, the correspondence between Trump Jr. and Rob Goldstone, a publicist who arranged the meeting, could provide fodder for US investigators probing whether Trump's campaign colluded with the Kremlin."The Crown prosecutor of Russia ... offered to provide the Trump campaign with some official documents and information that would incriminate Hillary and her dealings with Russia and would be very useful to your father," Goldstone wrote Trump Jr. on June 3. Russia does not have a "crown prosecutor" - the equivalent title is prosecutor general.US intelligence agencies have concluded that Moscow sought to help Trump win the election in part by releasing private emails from Democratic Party officials."The conversation will now turn to whether President Trump was personally involved or not. But the question of the campaign’s involvement appears settled now," Cornell Law School professor Jens David Ohlin said in an interview. "The answer is yes."Moscow has denied any interference, and Trump says his campaign did not collude with Russia.Trump Jr. said he did not tell his father about the meeting. "There was nothing to tell," he said on Fox News.FINANCIAL MARKETS JOLTEDThe news jarred financial markets as investors worried it presented a fresh distraction from the administration’s economic agenda. Stocks and the dollar fell, while US Treasury securities gained ground. Stocks later retraced most of their losses after Senate Majority Leader Mitch McConnell pledged to keep lawmakers in Washington longer than scheduled to push through a bill to overhaul healthcare.Along with his younger brother Eric, Trump Jr. oversees the Trump Organization, his father's real-estate and business empire, and does not have a formal role in the White House.The emails do not appear to provide evidence of illegal activity, but legal experts say Trump Jr. could run into trouble if investigators find he aided a criminal action, such as hacking into Democratic computer networks, or violated campaign-finance laws by accepting gifts from foreign entities.He is likely to face scrutiny from both congressional committees investigating the matter.The Senate Intelligence Committee plans to call on him to testify and to provide documents, according to a Senate source, while the House of Representatives Intelligence Committee wants to interview him and everybody else involved in the meeting, said the panel's top Democrat, Representative Adam Schiff."The American people need to know that our president is acting on their behalf and not acting because he has a fear that the Russians could disclose things that would harm him or his family," Schiff told reporters.Senate Judiciary Committee Chairman Charles Grassley, a Republican, asked the Trump administration how Veselnitskaya was able to enter the United States even though her authorization had expired.CNN reported that Special Counsel Robert Mueller, who is heading a criminal investigation at the Justice Department, also planned to look into the meeting.White House spokeswoman Sarah Sanders told reporters that the president applauded his son's transparency in releasing the emails and viewed him as a "high-quality person," referring all other questions to Trump's and his son's lawyers.Vice President Mike Pence, who has said that the campaign had no contacts with Russia, said through a spokesman that he was not aware of the meeting, which took place before he became Trump's running mate later that summer.Senator Lindsey Graham, a South Carolina Republican who is at times harshly critical of Trump, told reporters: "This is very problematic. We cannot allow foreign governments to reach out to anybody's campaign and say: 'We'd like to help you.'"