"It was a mistake. I shouldn't have done it and I won't do it again," Spicer told CNN in an interview. "It was inappropriate and insensitive." 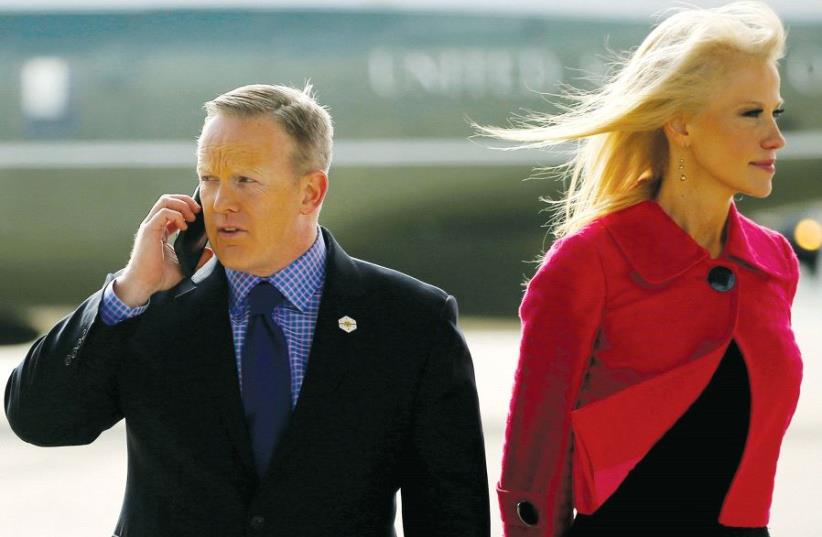 White House spokesman Sean Spicer and senior adviser Kellyanne Conway – who has recently defended what she referred to as ‘alternative facts’ – wait for US President Donald Trump to arrive to board Air Force One for travel to Philadelphia from Joint Base Andrews, Maryland, last month
(photo credit: REUTERS)
Advertisement
WASHINGTON  - White House spokesman Sean Spicer triggered an uproar on Tuesday by saying Adolf Hitler did not use chemical weapons. He apologized after his comments drew immediate criticism on social media and elsewhere for overlooking the fact that millions of Jews were killed in Nazi gas chambers.
Spicer says Hitler "didn"t even sink to using chemical weapons" (credit: REUTERS)
Spicer made the assertion at a daily news briefing, during a discussion about the April 4 chemical weapons attack in Syria that killed 87 people. Washington has blamed the attack on the government of Syrian President Bashar Assad."You had someone as despicable as Hitler who didn't even sink to using chemical weapons," Spicer said when asked about Russia's alliance with the Syrian government.The Nazis murdered six million Jews during World War Two. Many Jews as well as others were killed in gas chambers in European concentration camps.When a reporter asked Spicer if he wanted to clarify his comments, he said: "I think when you come to sarin gas, there was no, he was not using the gas on his own people the same way that Assad is doing."Later on Tuesday, Spicer apologized and said he should not have made that comparison."It was a mistake. I shouldn't have done it and I won't do it again," Spicer told CNN in an interview. "It was inappropriate and insensitive."Spicer's assertion, made during the Jewish holiday of Passover, sparked instant outrage on social media and from some Holocaust memorial groups who accused him of minimizing Hitler's crimes."Sean Spicer now lacks the integrity to serve as White House press secretary, and President Trump must fire him at once," said Steven Goldstein, executive director of the Anne Frank Center for Mutual Respect.Shortly after the White House briefing, Spicer emailed a statement to reporters in response to their queries, but had stopped short of offering an explicit apology."In no way was I trying to lessen the horrendous nature of the Holocaust. I was trying to draw a distinction of the tactic of using airplanes to drop chemical weapons on population centers. Any attack on innocent people is reprehensible and inexcusable," Spicer said in the statement.The US Holocaust Museum did not mention Spicer's comments directly, but sent out a tweet shortly after the briefing that showed graphic footage of dead bodies US forces found while liberating the Buchenwald concentration camp.The video was retweeted more than a thousand times, with many Twitter users referencing Spicer's comments.US House Democratic leader Nancy Pelosi called on Republican President Donald Trump to reject Spicer's assertion."Sean Spicer must be fired, and the President must immediately disavow his spokesman's statements," Pelosi said in a statement.The White House did not immediately respond when asked to comment on Pelosi's statement.It was not the first time the White House has had to answer questions about the Holocaust. Critics in January noted the administration's statement marking International Holocaust Remembrance Day, which omitted any mention of Jewish victims.At the time, Spicer defended that statement by saying it had been written in part by a Jewish staff member whose family members had survived the Holocaust.