Report: US Attorney General Sessions did not disclose Russia contacts

The US Attorney General reportedly hid his contact with Russia's ambassador, and is now being called on to resign amid the controversy following the revelation of this information on Wednesday. 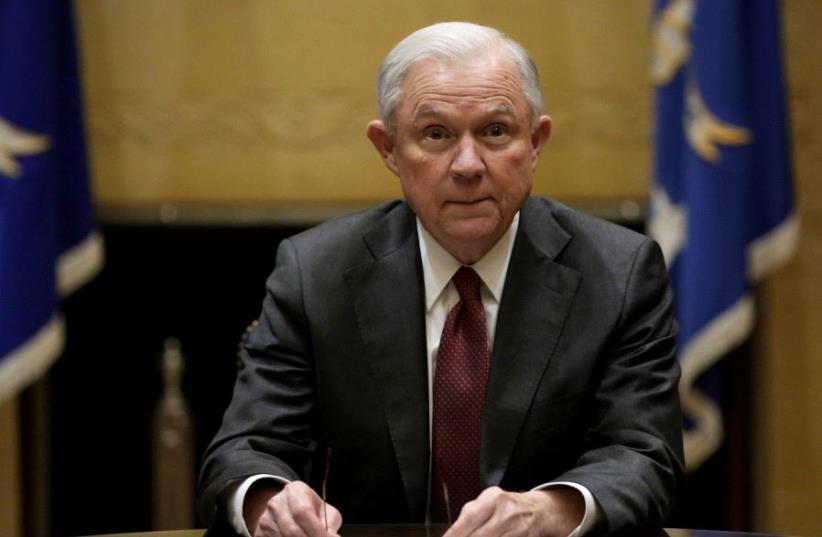 US Attorney General Jeff Sessions resigns
(photo credit: REUTERS)
Advertisement
Jeff Sessions, while still a US senator, spoke twice last year with Russia's ambassador, encounters he did not disclose when asked during his confirmation hearing to become attorney general about possible contacts between Donald Trump's campaign and Russian officials, The Washington Post reported on Wednesday, citing Justice Department officials.Nancy Pelosi, the US House Democratic leader, called on Sessions to resign and also called for an independent, bipartisan investigation into Trump's possible ties to Russians. "Sessions is not fit to serve as the top law enforcement officer of our country and must resign," she said in a statement.In a statement posted on Twitter later by his spokeswoman Sarah Isgur Flores, Sessions said he had never discussed campaign details with any Russian officials."I have no idea what this allegation is about. It is false," Sessions said in the statement.Trump's first national security adviser, Michael Flynn, was fired last month after he discussed US sanctions on Russia with Kislyak before Trump took office and misled Vice President Mike Pence about the conversations.The Washington Post said one of Sessions' meetings was a private conversation with Russian Ambassador Sergei Kislyak that took place in the senator's office in September.This came at the height of what US intelligence officials say was a Russian cyber campaign to upend the US presidential race, the Post reported.RUSSIAN "MEDDLING"Along with Pelosi's call for Sessions to resign, the Washington Post said the previously undisclosed discussions could fuel new congressional calls for the appointment of a special counsel to investigate Russia's alleged role in the 2016 presidential election.As attorney general, Sessions oversees the Justice Department, including the Federal Bureau of Investigation, which have been leading investigations into Russian meddling and any links to Trump's associates.Sessions has so far resisted calls to recuse himself.When Sessions spoke with Kislyak in July and September, he was a senior member of the influential Senate Armed Services Committee as well as one of Trump’s top foreign policy advisers, according to the Washington Post.Sessions played a prominent role supporting Trump after formally joining the campaign in February 2016.At his Jan. 10 Judiciary Committee confirmation hearing, Sessions was asked by Democratic Senator Al Franken what he would do if he learned of any evidence that anyone affiliated with the Trump campaign communicated with the Russian government in the course of the 2016 campaign, the Washington Post reported."I’m not aware of any of those activities," Sessions responded, according to the Post. He added: "I have been called a surrogate at a time or two in that campaign and I did not have communications with the Russians."Officials said Sessions did not consider the conversations relevant to the lawmakers’ questions and did not remember in detail what he discussed with Kislyak, according to the Post."There was absolutely nothing misleading about his answer," Flores earlier told the Post.The Department of Justice and the White House did not respond immediately to requests by Reuters for comment.Justice officials said Sessions met Kislyak on Sept. 8 in his capacity as a member of the armed services panel rather than in his role as a Trump campaign surrogate, the Post reported."He was asked during the hearing about communications between Russia and the Trump campaign - not about meetings he took as a senator and a member of the Armed Services Committee," Flores told the Post.