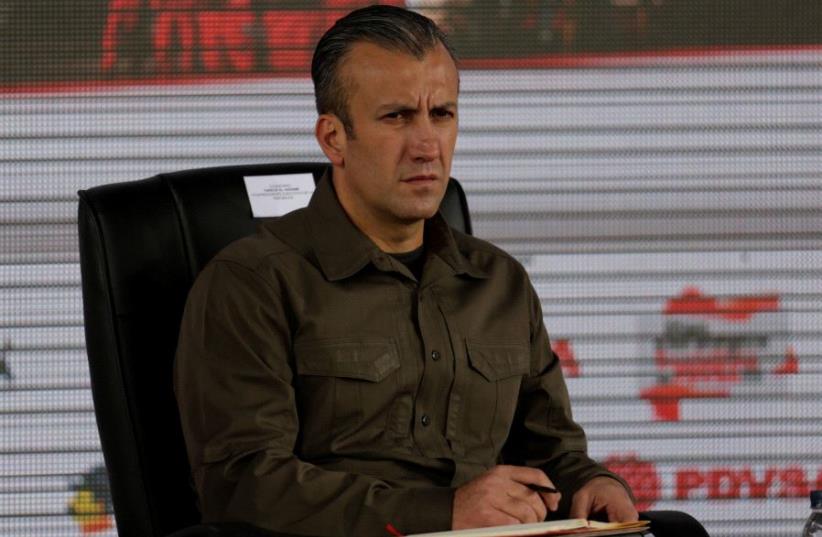 Vice President Tareck El Aissami
(photo credit: REUTERS)
Advertisement
RIO DE JANEIRO — The Trump administration imposed sanctions against Venezuelan Vice President Tareck El Aissami, accusing him of playing a major role in international drug trafficking, ABC News reported.El Aissami, who has has been accused of antisemitism and ties to Iran and the terrorist group Hezbollah, has been barred from entering the United States. The executive decree issued Monday is the result of a years-long investigation.One confidential intelligence document links El Aissami to 173 Venezuelan passports and ID’s that were issued to individuals from the Middle East, including people connected to Hezbollah, reported CNN.There was no immediate reaction from the Venezuelan government or El Aissami, who has long denied any criminal ties. He was tapped as the South American country’s vice president by President Nicolas Maduro in early January.“Not only implicated in drug trafficking and relations with the Colombian terrorist FARC movement, El-Aissami has inherited ex-President Hugo Chavez’s hatred of Israel and Jews and can now pursue Maduro’s anti-Semitism, further threatening Jewish lives in Venezuela,” the Simon Wiesenthal Center’s representative in Latin America, Ariel Gelblung, said in January.He added: “Indeed, El-Aissami may transform anti-Semitism into state policy and further the transplantation of the Middle East conflict to South America.”According to the Wiesenthal Center, Aissami’s name has appeared as an intermediary between Iran and Argentina in the plan to camouflage Tehran’s alleged complicity in the 1994 Buenos Aires AMIA Jewish Center bombing, which killed 85 and injured 300. No one has been brought to justice for the bombing.Last month, nine Venezuelan Jewish converts were permitted to immigrate to Israel after their initial request was denied. The indigenous Venezuelans converted to Judaism in 2014 under the auspices of a Conservative rabbinical court and will need to undergo a second conversion described as “symbolic.”A recent Washington Post article said about 6,000 to 9,000 Jews remain in Venezuela, which has a general population of approximately 30 million. Just 15 years ago there were 20,000 Jews living in the South American nation.Citing Israeli government data, the paper reported that 111 Venezuelan Jews moved to Israel in 2015 – more than double the number from three years earlier.