British police have reportedly stopped sharing information about the Manchester bombing with the United States, due to anger over the detailed disclosures. 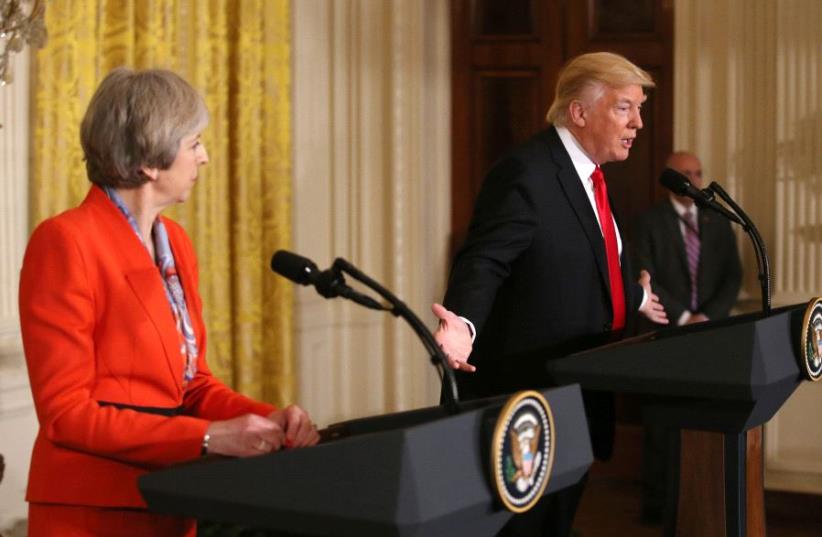 British Prime Minister Theresa May looks on as US President Donald Trump speaks during their joint news conference at the White House in Washington, January 27, 2017
(photo credit: REUTERS)
Advertisement
British Prime Minister Theresa May will raise concerns with US President Donald Trump on Thursday about US leaks of intelligence on the suicide bombing in Manchester that police fear could hinder a hunt for a possible bomb-maker still at large.After the deadliest attack in Britain since July 2005, police are hunting for accomplices whom they suspect helped Salman Abedi build the bomb that killed 22 people on Monday in a crowded concert hall in the northern English city of Manchester.But British ministers and security chiefs have been dismayed by leaks in the US media which made public details about the British investigation.May will raise concerns over the leaks when she meets Trump at a NATO meeting on Thursday, the BBC reported.The New York Times published detailed pictures of the crime scene, including the remains of the suspected bomb and the rucksack worn by the suicide bomber.The BBC reported that British police had stopped sharing information about the Manchester bombing with the United States, due to anger over the detailed disclosures. A spokeswoman for PM May declined to comment on the reports.British police have arrested two more men in connection with the Manchester attack, taking the number of people in custody to eight, Greater Manchester police said.Britain views the United States as its most important defense and security ally, and the two countries also share intelligence as part of the "Five Eyes" network which also includes Australia, Canada and New Zealand.After Trump defended his decision to discuss intelligence with the Russians during a White House meeting, May said last week that Britain would continue to share intelligence with the United States.
Manchester"s disbelief at US leaks as fear of imminent attacks grows (credit: REUTERS)
The most recent British concerns came after another intelligence-sharing scandal erupted earlier in the month enshrouding the Trump administration. Last week, reports emerged stating that Trump allegedly shared sensitive intelligence with the Russians about ISIS, with speculation that the information shared came from Israeli intelligence sources. According to a New York Times report, two US officials - one current and one former - said Trump shared the intelligence supplied by Israel in the fight against Islamic State with the Russian officials during an Oval Office meeting earlier this month, which the American press was barred from attending.Russia had earlier dismissed reports first published by The Washington Post, calling it “fake news.” But facing a deluge of criticism over his handling of highly classified information, Trump took to Twitter last Tuesday, defending having shared “facts” with senior Russian officials, saying he had an “absolute right” to do so and had been trying to get Moscow to become more active in combating Islamic State.However, while visiting Jerusalem on Monday, Trump denied that he mentioned Israel when he met earlier in May with Russian Foreign Minister Sergey Lavrov and Russian Ambassador to the US Sergey Kislyak. After Trump departed from Israel, Defense Minister Avigdor Liberman said on Wednesday that the country has changed its intelligence sharing apparatus following the president's disclosure of classified information to Russian officials.Liberman, speaking on Army Radio, said that while “this is not an issue we should discuss on the radio; there are some things that are discussed in closed rooms,” Israel has since made a “small change” to its intelligence-sharing apparatus. Our “intelligence cooperation with the United States is unprecedented,” he added. Herb Keinon and Anna Ahronheim contributed to this report.