Thousands of travelers await the court's final decision regarding the travel ban, which seeks to prohibit the entrance of immigrants from seven majority-Muslim countries into the US. 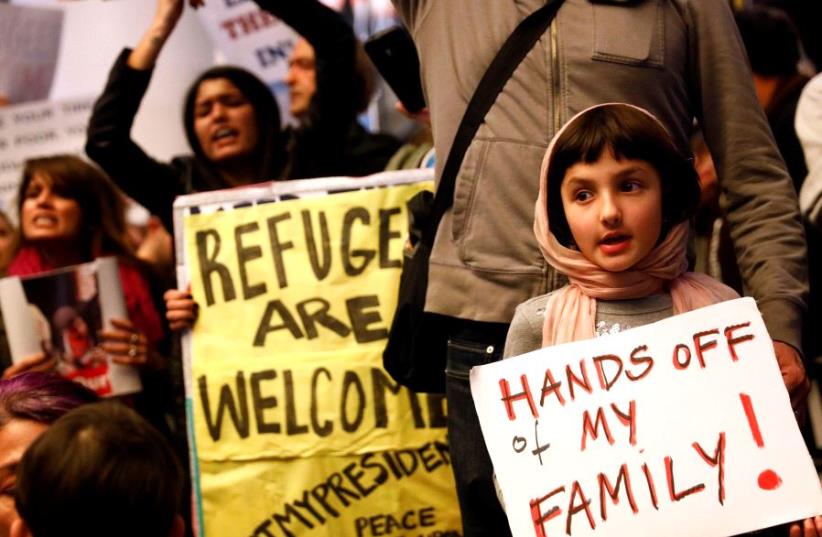 A girl holds a sign in support of Muslim family members as people protest against U.S. President Donald Trump's travel ban on Muslim majority countries.
(photo credit: REUTERS)
Advertisement
Three US federal court judges weighed on Tuesday the fate of the controversial immigration ban US President Donald Trump has pushed to reinstate in recent weeks. The panel of three appellate judges from the US Court of Appeals for the 9th Circuit reportedly grilled a Justice Department lawyer regarding the information and evidence Trump had used in forming his decision on the ban. They also questioned him about the extent of power the president should have in this particular case as well as others. According to the New York Times, judges also interrogated Washington's solicitor general about what evidence he could offer to illustrate religious discrimination. They also asked whether last week's freeze on the ban was too general.
Protesting in Jerusalem against the Trump immigration ban to US on Jan. 29, 2017 (credit: MARC ISRAEL SELLEM / THE JERUSALEM POST)
Last Friday federal court judge James Robart temporarily put a halt to the immigration ban, which Trump has branded as crucial to US security, in a move that many exalted over. The president angrily reacted to Judge Robart's decision in a series of tweets, denouncing him as a "so-called" judge and telling reporters that "we'll win. For the safety of the country, we'll win."The ban in question will prohibit the entrance of citizens of seven majority-Muslim countries into the US and has sparked controversy within the United States and across the world, evoking an outcry of resistance and criticism from many who deemed the move as racist and as opposed to core American values. The court said that a final decision on the matter is slated to be determined "probably this week," with Judge Michelle Taryn Friedland promising a quick consideration. Tens of thousands of travelers whose visas were revoked by the initial executive order and then restored are now waiting for the court to make a decision that could have a significant and direct impact on them once more.