Why is Rudy Giuliani close with this Hassidic Ukrainian rabbi?

Azman’s Giuliani connection appears to predate the May meeting. A video published on Anatevka’s Facebook page in September 2018 featured greetings from Giuliani, Parnas and Frumin. 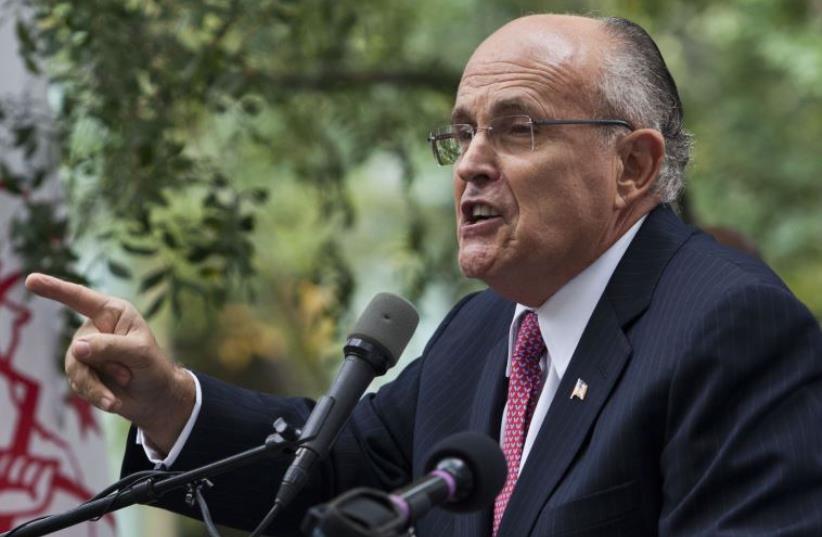 KIEV  — It was not his desired meeting place, but Rudy Giuliani still looked very comfortable enjoying a cigar in Paris with Moshe Azman, a Hasidic rabbi who is one of several figures claiming to be the chief rabbi of Ukraine.

Later that same day, May 21, Giuliani tweeted out a photograph of the sit-down — puffs of smoke, Fox News bag and all.

The former New York City mayor and now attorney for President Donald Trump had planned to meet Azman in Ukraine, but he called off the trip because of the growing controversy surrounding his efforts to paint former Vice President Joe Biden as corrupt — efforts that are now, along with those of Trump, at the center of a nascent impeachment investigation.

The meeting between Giuliani and Azman — a high-profile and well-connected figure in Ukraine — has fueled speculation among some in this capital city that Giuliani and his colleagues were using the rabbi to provide cover for their Ukrainian lobbying activities.

Adding to the intrigue is that the Giuliani-Azman meeting seems to have been arranged by Lev Parnas and Igor Fruman, the Jewish Giuliani associates who have been linked to Giuliani and Trump’s Ukrainian lobbying efforts. Parnas and Fruman were arrested at the Washington-area Dulles International Airport earlier this month on campaign finance charges stemming from their efforts to funnel foreign money to American political candidates.

According to the Organized Crime and Corruption Reporting Project, an international journalism network that works to uncover political corruption, Giuliani was being paid to deliver a speech at a fundraiser for Azman’s Anatevka project. Anatevka — named for the shtetl in “Fiddler on the Roof”— is a gated compound outside of Kiev housing Jews displaced by the ongoing war in eastern Ukraine. Parnas and Fruman sit on the board of the American Friends of Anatevka.

According to the reporting project Giuliani, who has said he is working for Trump pro bono, would have met with Ukrainian President Volodymyr Zelensky “on the sidelines” of the Anatevka Project event.

Instead, after canceling his trip to Ukraine, Giuliani flew to Paris, where he attended a number of meetings — brokered by Parnas and Fruman — with senior Ukrainian figures. He also sat with Azman for two hours. Azman presented Giuliani with a giant novelty key declaring him “honorary mayor of Anatevka.”

At a time when Democrats and the media are intensely scrutinizing all things Trump and Ukraine, the photograph and the story behind it provide a window into Giuliani and his associates’ maneuverings in the former Soviet republic.

In an exchange with the Jewish Telegraphic Agency via WhatsApp, Azman declined to say if Biden had come up in his two-hour meeting with Giuliani.

“I don’t really want to give an interview about these matters at all, especially at this time,” Azman said.

Pressed on the question of whether Biden had come up during the meeting, Azman expressed his wishes for a good Jewish New Year and would not comment further.

Both Trump and Giuliani have pressed senior Ukrainian figures, including Zelensky, to launch a probe into the conduct of Biden’s son Hunter, who sat on the board of a Ukrainian firm that that had been probed for corruption. Both Trump and Giuliani claim that Biden was attempting to protect his son when he joined with other world leaders to demand the ouster of the then-Ukrainian top prosecutor, Viktor Shokin, who was widely seen as corrupt himself. There is no evidence that the younger Biden engaged in any illegal activity.

Giuliani also declined to provide details on his discussion with Azman in Paris.

“I am sorry but I can’t really discuss those conversations,” he told JTA. “They were private and quite honestly [I] don’t have a strong recollection of it anyway.”

In an interview with the Ukrainian news outlet Hromadske published in late August, the rabbi offered some details of his chat with Giuliani.

“I told him and asked that they pay attention to Ukraine and provide assistance,” Azman said. “I talked with him face to face for two hours in Paris, I can’t tell everything. But believe me, I wanted to achieve peace and draw attention to Ukraine. I hope that we will see the result soon.”

He also told the news outlet that he prays for Trump “every Saturday” due to the president’s support for Israel.

In a series of Facebook posts following the meetings, Azman added that he and Giuliani had spoken about “pressing issues” and that the president’s attorney “was very interested in current events in Ukraine.” The rabbi said he hoped that “Ukraine will soon be able to feel great positive changes on the part of the United States and their great president Donald Trump.”

Azman’s connection to Giuliani and his associates appears to predate the May meeting. A video published on Anatevka’s Facebook page in September 2018 featured greetings from Giuliani, Parnas and Fruman.

“Hi Moishe, how are ya, baby,” Giuliani said in the video, waving and chuckling.

“Can’t wait to come back,” Giuliani added with a grin as Parnas and Fruman laughed next to him.

“See you in Ukraine soon,” Parnas said, with Fruman adding, “Anatevka is the best place in the world” as the trio laughed and flashed a thumbs up.

In a second interview, Azman declined to answer questions about Parnas and Fruman, and their connection to his work.

In August, the Anatevka Jewish Refugee Community Facebook page highlighted an announcement from Fruman – “on behalf of American Friends Of Anatevka” – that the nongovernmental organization’s “commitment to match every dollar donated up to $1 million.”

Asked how much money he had received from Parnas and Fruman, Azman replied that he did “not want to discuss it” because “these were private donations.”

Earlier this month, JTA reported that the pair had given a donation to an affiliate of the National Council of Young Israel, an Orthodox synagogue association, upon participating in a Young Israel-affiliated trip to Israel and the West Bank. On Saturday, BuzzFeed reported that the size of that donation was $25,000. Young Israel later honored Parnas and Fruman at its 2019 annual gala.

American Friends of Anatevka reported $1,337 in income in 2017, its first year of operation. Data for subsequent years is unavailable.

Asked about his associates’ arrests, Azman responded: “I do not give interviews, you dialed the wrong number … I pray.”

For a trio seeking contacts in Ukraine, Azman would seemingly have brought something to the table: The rabbi has traveled with former Ukranian President Petro Poroshenko, blown the shofar in parliament, and hosted government ministers and lawmakers at his synagogue in downtown Kiev as well as at the Anatevka compound.

Still, some Ukrainian observers cast doubt on Azman’s ability to supply the level of access and influence that Giuliani would have been seeking.

A former senior Ukrainian government official with knowledge of the Jewish community said Azman “could open a lot of doors, but he is not unique” and would not have been the ideal go-between for Giuliani regarding the Biden matter.

The official said he met many deputies and businessmen at Azman’s synagogue but did not “think his role is very special in this story.”

Azman is a follower of the Lubavitcher Rebbe, the late spiritual leader of the Chabad-Lubavitch movement, to which he used to belong. In the 1990s, that movement said Azman, who has a reputation of a being a maverick, no longer represents it, citing theological differences.

One prominent Jewish personality in Kiev who has often been critical of Azman questioned both the depth of the rabbi’s government connections and his reliability as a potential partner in any covert lobbying efforts. The figure, who spoke on condition of anonymity and stressed that he had no direct knowledge of the matter, speculated that he believed that Parnas, Fruman and Giuliani had used their connection with Azman to provide cover for their Ukraine-related activities.

“I think [Parnas and Fruman] were using Azman, introducing him to Giuliani and saying, ‘Listen, this is the guy that has the connections to all the politicians in Ukraine,’ when in reality Azman had no connections, wasn’t able to do anything, but it was sort of the lure to Giuliani,” the prominent Jewish personality in Kiev said. “Of course he knows [people], but that’s not the level [of access] that Giuliani needed. Giuliani needed a much higher level to get to where he wanted to get.”

Josef Zissels, another prominent Jewish personality in Kiev, said that having known Azman for 30 years, he believed it was important to take anything the rabbi said with “a grain of salt.”

Zissels, the head of the Association of Jewish NGOs and Communities (Vaad) of Ukraine, suggested that Azman was trying to create the impression that he was much more important than he really is.

“Azman needed Giuliani because he wanted to engage him in Anatevka, but Giuliani did not need Azman at all,” Zissels said.

Vyacheslav Likhachev, another representative of the Vaad, elaborated.

“Azman tries to surround himself with a bunch of sponsors and businessmen who have ambitions and opportunities,” he said.

Likhachev said that if he was asked who is the most powerful rabbi in Ukraine, he would name Rabbi Shmuel Kaminezki of Dnipro.

“Kaminezki is trusted by Zelensky and in some issues he appears to rely on him,” Likhachev said, adding that Kaminezki was the only rabbi invited to the Ukrainian president’s inauguration.

Asked if his planned appearance at Azman’s fundraiser and their subsequent meeting in Paris had been intended to provide cover for lobbying activity connected to Parnas and Fruman, Giuliani replied “of course not.”

“There was no lobbying and I did a luncheon for them and a meeting and visit to [the] synagogue,” he said in a text. “[I] didn’t do any lobbying for them. Don’t know who is feeding that but it’s dead wrong.”