A bittersweet reopening for the bar targeted in Tel Aviv attack

“I think it’s very strange to sit by a sort of memorial and drink a beer; On the other hand, I think if it weren’t at my place, I would see something very beautiful in it, very supportive." 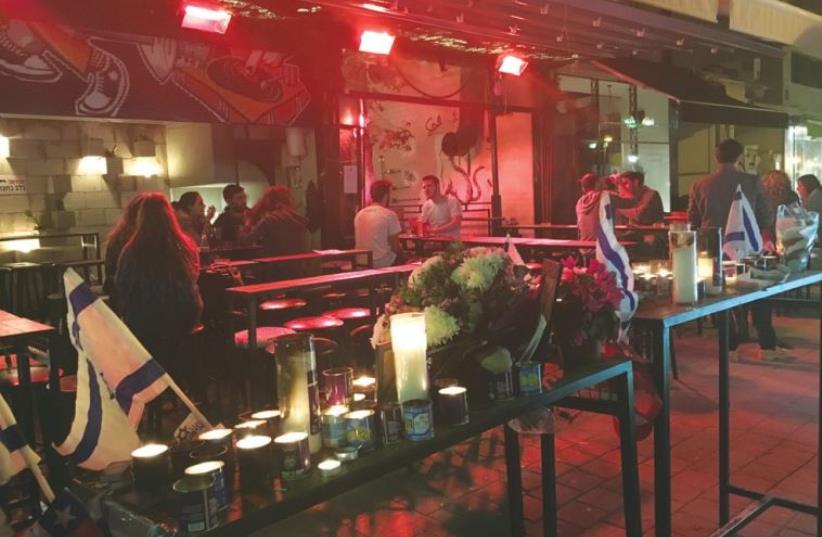 Mourning candles light the entrance to Tel Aviv’s Hasimta Bar on Friday, as it reopened following the previous week’s terrorist attack
(photo credit: NIV ELIS)
Advertisement
A police car stood guard Friday as Hasimta bar prepared to officially reopen, just a week after a terrorist murdered its manager, 26-year-old Alon Bakal, and Shimon Ruime, a patron.The air was emotional and tense. Just hours earlier, reports of an active terrorist warning in Tel Aviv put people on guard. Yet, the people came and sat, some of them specifically as a show of support, others just as a matter of getting back to life as usual. The sea of memorial candles that crowded the bar’s entrance all week were relegated to two nearby tables, replaced by seated customers sipping beer.“Getting back into the routine is full of ups and downs.One second you’re happy and remember something positive or funny about him, and a second later you’re crying,” Karin Muchtar, a manager at Hasimta who had worked side-by-side with Bakal said Saturday night. “At a certain point, reality calls you. You have school, work, your real life... and it’s not easy.”It was just two-and-a-half months since Bakal had begun working at the bar, which itself only opened its doors in September, but he had made a strong impression on the people he worked with, making fast friends. He made it his pet project to develop the downstairs area, which is still not open to the public. Getting the place up and running again, helping it succeed, is what he would have wanted, says Muchtar.“I think it’s very strange to sit by a sort of memorial and drink a beer. On the other hand, I think if it weren’t at my place, in my home, in my living room, I would see something very beautiful in it, very supportive, a really nice symbol, and I think it reflects who Alon was,” she says as she rolls a cigarette at one of the outdoor wooden tables.Tension since the attack turned into relief with news that the suspected gunman had been found and killed in a gun battle with police.But the news offered little comfort.“I wish I could say that there was some feeling of closure and a sense that things are easier, or that he had it coming, but no. It doesn’t bring Alon back to us. [But] I won’t say I wasn’t happy to hear that they got him. I was very happy,” she says.Hasimta is visibly emptier than the popular Dizzy-Frishdon bar across the street, which is hosting a party. A couple at the bar say they came specifically to show their support.“It’s a shame there aren’t more people,” one notes.Outside, a regular says it was important for her to get back to routine, though Bakal’s absence was palpable.“It’s never this empty. This place is always hopping,” she says. “But it’s still early.”Muchtar acknowledges that some people are still afraid, but says that an outpouring of support has helped boost turnout.“A lot of people are coming to show support. Passersby, families, mothers,” she says, taking a drag of her cigarette.“I had my own conflicts about whether I wanted to come back and manage or not, whether I feel the need to or not, but it’s totally irrelevant. I want to see this place succeed, just like I think Alon would want.”