The 'Israeli spy' affair Lebanon is obsessed with

Lebanese media has been intently covering the story of an Iraqi citizen who was allegedly deployed by Israel to spearhead an espionage ring in Lebanon. 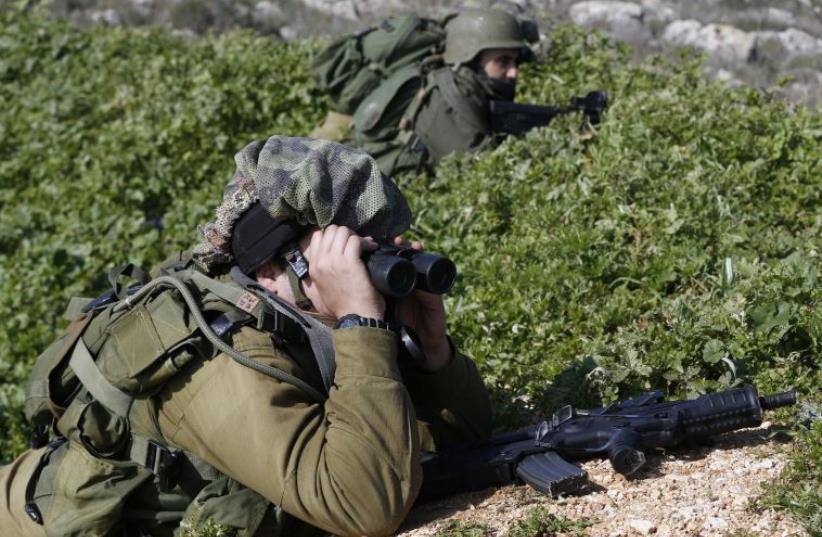 An Israeli soldier looks through binoculars towards the border with Lebanon
(photo credit: REUTERS)
Advertisement
Lebanon has been engaged in recent days with "the uncovering of a Mossad spy network" in the country. As the reports mount, more and more new details regarding the alleged espionage network are emerging in local media. The affair allegedly began with the arrest a month and a half ago of "an Israeli security service agent holding an Iraqi citizenship."According to a report by Lebanese media, an investigation of the man masterminding the spy ring revealed that the network was operating for a military security body called TASA ELITE and run by Israeli officers based in Kurdistan.The reports in Lebanese media explained that TASA ELITE's purpose was to gather information throughout the Arab world, specifically in Syria, Lebanon and Iraq, reportedly under the guise of "fighting terrorism" or "nations that support terror."The Iraqi citizen, who was arrested after being closely tracked in Lebanon for a certain period, has been named as Marbin Ben Y, and hails from Dahoc, a region in northern Iraq. He lives in a-Sabtia in Eastern Beirut. According to the reports, the investigation revealed that the suspect in question has been active since 2011, the year the Arab Spring had erupted across the Middle East. It was further claimed that the suspect had joined Kurdish Peshmerga forces in their fighting. He was also accused of "managing security and military cooperation with Israel and... even publicly hosting Israeli security advisers, claiming that they are fighting together against ISIS." The reports alleged that the detained suspect denied the claims that he was fighting with the Peshmerga, and instead explained that he arrived in the country with family members in November 2014. He reportedly also said that since then, he has been working for several companies that dealt in medical equipment and water distribution. Secret AccountAccording to Lebanese media, six months ago Marbin received a Facebook friend request from an account under the name of "Ilan Nissim." After corresponding for a while, Nissim disclosed himself to be an Israeli intelligence officer and allegedly told Marbin that "he requested the friendship in light of his opinions, among them hatred for Arabs and Muslims because of the ethnic suffering of the Sarianit sect, that found relief only in Israel."According to the report, he offered Marbin to gather intelligence on Hezbollah, the Lebanese army and the governments in Syria and to enlist agents in Lebanon and Iraq. Marbin was initially hesitant, fearing that he would be caught by the Lebanese security agency and charged with treason. However, the reports claim that he was eventually persuaded by the Israeli officer, who reassured him  that no one would disclose him.In the investigation Marbin reportedly stated that he gathered information about several places as was requested and passed his summary to his operative. Two weeks before his arrest, the agent requested that he gather material about the burial spot of Israeli navigator Ron Arad."The work took place through the use of secret Facebook accounts that Nissim requested to open," Marbin said."I never met the Israeli intelligence officer, even though I traveled between Lebanon and Iraq all the time," he allegedly noted. He even disclosed that he brought his brother into the network. The Lebanese security services that looked into the alleged activities of TASA ELITE, discovered that Nissim was the head. As stated, according to the reports, the body is made up of selected officers from several armies around the world, with its aim being to fight terror and illegal trading of civilians that were kidnapped by terrorists or by nations that support terror. Nonetheless, in the Lebanese media they are claiming that the archives of the company show that the institute is made up of officers and people from the IDF, using IDF equipment and even that activities are similar to Israel security services - the Mossad, the Shin Ben (Israel Security Agency) and the IDF's intelligence unit.From an investigation that was published in the Hezbollah-affiliated Lebanese newspaper Al-Akhbar, Nissim was born in Jerusalem in 1966, and currently resides in new York. According to the report, he is behind operations in Syria, Lebanon, Iraq, Yemen, Afghanistan and more.Al-Akhbar reported that Nissim was also responsible for training soldiers with combat equipment, assassinations and enlistment of agents for the Mossad, their goal being to gather intelligence.The publication also stated that Nissim managed to visit several countries recently, including Iraq and the UAE, Cyprus, Turkey, Jordan, northern Syria and the Syrian side of the Golan Heights. Lately he was in Kurdistan, Iraq, next to Iraqi Peshmerga on the border. According to the Lebanese army prosecutor, Marbin will stand for trial under the accusation of "cooperation with the Israeli enemy and gathering security intelligence," and his brother will be accused of "suspected cooperation with the enemy.""Enlisting Marbin due to his stance on Facebook emphasizes that the enemy enjoys displays of ethnic and sectarian racism in the region," Al-Akhbar wrote."Security forces are following the moods of people and groups on social media, utilizing feelings of minorities and displaying Israel as the messiah for those groups, especially with the intensifying battle in Syria and Iraq," the report added. "Israel is exploiting ISIS' strengthening, in order to adopt a role of a partner in 'the fight against terror' on a regional and international level, especially in recent years, with the declaration of the close relationship between several Arab nations and in light of future relations with the Kurdistan province."