MKs expected to be allowed on Temple Mount this month

“I call on all MKs to ascend the Mount and respect the place appropriately, leaving disputes and agendas behind,” MK Yehudah Glick said. 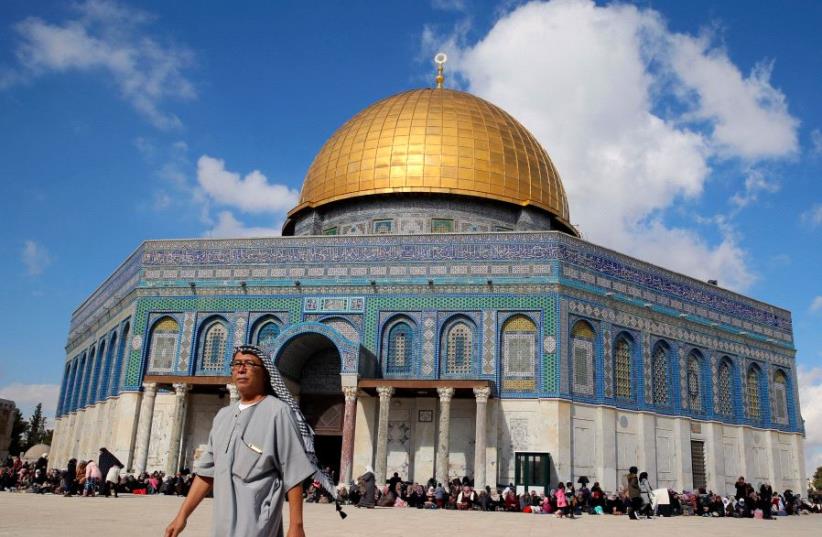 A man walks next to the Dome of the Rock on the Temple Mount compound
(photo credit: REUTERS)
Advertisement
Prime Minister Benjamin Netanyahu will lift his ban on lawmakers visiting the Temple Mount for a trial period later this month, the State Attorney’s Office plans to tell the High Court of Justice.According to the state’s planned response to a petition by Likud MK Yehudah Glick calling for an overturn of the ban, which went into effect in October 2015, they will be allowed at the holy site for a five-day period beginning July 23.During that time, the government will assess whether the visits spark violence; the assumption that they do was the logic behind Netanyahu’s ban.Glick said: “The decision to open the Temple Mount is right and appropriate. It’s too bad that we had to petition the High Court for it to be made.”
Yehuda Glick at the entrance to Temple Mount (Video: Jack Brook)
“I call on all MKs to ascend the Mount and respect the place appropriately, leaving disputes and agendas behind,” he added. “I call on the prime minister and public security minister to do all that is necessary against those who would take advantage of this decision to commit acts of terrorism.”Glick expressed hope that the Temple Mount will “fulfill its purpose as a world center for peace and reconciliation.”Before becoming a lawmaker, Glick was best-known as an activist for Jewish prayer rights at the Temple Mount, Judaism’s holiest site. In 2014, he survived an assassination attempt by a Palestinian from east Jerusalem who called him an “enemy of al-Aksa,” the mosque atop the Tempe Mount.The police currently permit only Muslims to pray on the Temple Mount, which is managed by the Jordanian Islamic Trust, or Wakf, thus maintaining the status quo at the site since 1967.Jews are allowed to visit the Temple Mount, but the visits became more limited after the Second Intifada began in 2000. In recent years, however, activists have been bringing growing numbers of Jewish visitors to the site.Unsubstantiated claims that Jews plan to change the status quo on the Temple Mount have repeatedly led to waves of Arab terrorism in the past, as far back as the Hebron Massacre in 1929 and as recently as the “stabbing Intifada” that began in September 2015.MKs affiliated with the Islamic Movement – Taleb Abu Arar, Masud Gnaim and Abdel-Hakim Haj Yahya of the Joint List – said it is not up to Netanyahu or the Israeli government to decide whether or not they pray on the Temple Mount.“The Aksa Mosque is a holy place for us as Muslims and it is only our right to enter and visit and pray. And it is occupied Arab Palestinian territory from which the Israeli government must withdraw,” they said in a statement. “We will continue to exercise our right to enter and pray in al-Aksa Mosque, and are not waiting for permission or a license from the Israeli prime minister.”Earlier this year, Gnaim was escorted away from the mosque by police.In the past, Yahya and other Arab lawmakers have taken advantage of their relative anonymity and visited the Temple Mount unnoticed by the authorities, despite the ban.A year ago, police said there are no security-related reasons to keep the ban in place, but Netanyahu said he would not reverse it. Earlier this year, the prime minister indicated that he had changed his mind, but set the date for the reversal following sensitive dates such as US President Donald Trump’s visit; the 50th anniversary of the Six Day War; and the month of Ramadan.