The specific job listing is for a Local Access Associate. 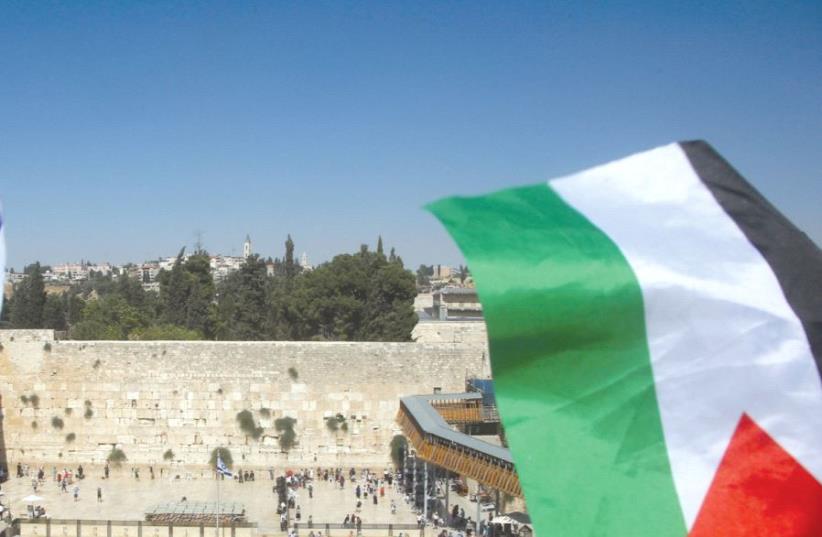 A Palestinian flag is seen waving in front of the Kotel
(photo credit: REUTERS)
Advertisement
NEW YORK – The United Nations Office for Project Services (UNOPS) recently posted a job offering on its website, listing the duty station for the position as “Jerusalem, Palestine (State of),” The Jerusalem Post has discovered.UNOPS, headquartered in Copenhagen, is the operational arm of the UN. Its role is to implement projects for the United Nations, international financial institutions, governments and others dealing with international aid, conducting some 1,000 projects yearly and employing about 7,000 people in 80 countries.The specific job listing, which irritated Israeli officials, is for a local access associate who will be in charge of managing projects focusing on the movement of humanitarian and development personnel and goods.“Since the opening of the Jerusalem Office in 2006, UNOPS has significantly strengthened its operations in Palestine,” the site says. “Our expert knowledge, skills and management systems contribute to the sustainable development of public infrastructure in Gaza and the West Bank, including Area C and East Jerusalem.”Although the description completely forgoes any mention of Israel, when it comes to the skills required for the position, the site says: “Holding a national (Israeli) driving license is essential.”After being made aware by The Jerusalem Post of the job posting, Israeli Ambassador to the UN Danny Danon called on Under-Secretary-General and UNOPS Executive Director Grete Faremo to remove the posting from the site and institute immediate reforms.“It is unacceptable for UN agencies to not only attempt to change the political facts on the ground, but to question the connection between the State of Israel and our capital of Jerusalem,” Danon said. “This posting must be removed immediately, and UNOPS must conduct a complete overhaul of its operating procedures to ensure that such inappropriate behavior not occur again.”