By MUTUALART.COM
AUGUST 3, 2010 14:17
Crude Awakening311
(photo credit: Heidi Hatre and Jane Fulton)
Advertisement
As news of the pending resignation of BP’s CEO Tony Howard makes worldwide headlines, the backlash from the Gulf oil spill continues to build, with the art world being no exception to the growing protest. Demonstrators have thrown an oil-like substance and feathers at the entrance to Tate Britain in London and on statues in the British Museum in protest of the museums’ BP sponsorship. More than 170 artists have written an open letter protesting the sponsorships.In the aftershock of what experts are calling the largest offshore spill in U.S. history, artists are responding accordingly by doing what they do best: creating works that reflect the impact of the disaster on the world, using a multitude of mediums to portray their interpretations. Two such artists have decided to tackle this from different angles: German sculptor and painter Heide Hatry uses mixed media creations, such as covering found animal corpses in crude oil, to illustrate the grisly impact of the spill on the ecosystem, whereas American photographer Jane Fulton Alt explores people instead, snapping pictures of families from diverse ethnic backgrounds at the beach, covered with an oil-like substance.Hatry’s exhibition Imagine it Thick in Your Own Hair at the Pierre Menard Gallery in Cambridge, Massachusetts (July 22nd--August 1st) explores the effects the disaster has had on people and animals alike. Admittedly obsessed by the BP fiasco, Hatry’s artistic endeavors converge with her empathy. “I intended in my own work to evoke the tragedy being visited upon the earth and sea that is choking its life from it right now and to motivate people to help. It is difficult to not look away when you see an actual animal suffering, and I wanted to demand awareness by putting the harsh truth directly in front of the viewer, unmitigated by distance,” she told MutualArt.com.Indeed, Hatry’s work is nothing if not confrontational. The slick, blackened animals featured in her works are all-too realistic. The artist’s pieces are shockingly truthful, poignant reminders of the consequences of human carelessness with regards to the environment. By using the bodies of animals in her work, Hatry says she is trying to “portray the whole planet's struggle for life in the person of these helpless individual creatures.” 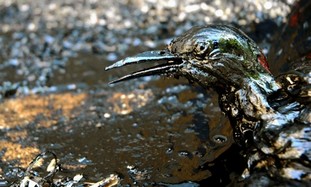 Heide Hatry, Destroyed Bird, 2010, Mixed media on canvasThe benefit exhibition features sculptures and paintings by Hatry, and is followed by a silent auction offering works by various other artists, such as Rosamond Purcell, Larry Deyab, and Wilfredo Chiesa. Likewise, of the show’s numerous contributing artists, many donated works influenced by the spill. Highlighted lots include a photo poem by Aldo Tambelini featuring an oil-suffused pelican and Antón Lamazares’ lithograph of two birds struggling before indifferent spectators. In addition to these eye-catching pieces, Hatry created unique artists’ books, featuring previously unpublished works by poets Robert Kelley and Pulitzer Prize winner Franz Wright. One of Kelley’s powerful poems also gave the show its moniker, Imagine it Thick in Your Own Hair.The sale continues to receive donations and bids from prospective buyers, and has therefore been extended until August 1st. All proceeds from the auction will benefit the Audubon Gulf Oil Response, the premiere organization aiding wildlife in the Gulf.Heide Hatry, Oil Spill Lizard, 2010, mixed media on canvas 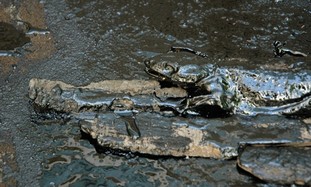 “We have come to accept and live with the fact that the world is seriously wounded...But the whole technological complex and our relationship to it, as Heidegger pointed out long ago, is the problem, not the solution. Human beings acting in human ways, concerned, involved, aware, are the solution. In its power and simplicity, art can remind us of this,” says Hatry.Alt agrees wholeheartedly. Like Hatry and others, she has responded to the BP catastrophe by producing “spill-centered” works that serve as symbols warning humankind about the fallibility of technology, and its disastrous impact on the world. "We are all responsible for leading lives that create demand for unsustainable energy. We are also all responsible for the solution and we must work together to protect the balance of life," she tells MutualArt.com. Her aptly titled Crude Awakening features eerie photographs of families of all ethnic backgrounds and ages at the beach -- completely covered in what appears to be crude oil. (It’s not - the substance is non-toxic, but has the appearance and texture of the real stuff). Alt explains, “I initially wanted to use real oil but did not think it would be safe. I tried to simulate oil in Photoshop which did not work. I thought the project was dead. Then I went to a BP protest in Chicago and casually asked another protester if she would consider modeling with real oil. She said yes which totally shocked me. We then brainstormed about other non toxic substances we might utilize.”According to Alt, “I had an exhibition last year at the Chicago Cultural Center of my Katrina photographs, After the Storm. What pleased me the most was that people who would not normally go to an art gallery had access to the work. It made me realize the power of public art spaces. There is no more "public" space than the internet. I am really pleased that the work has been seen by so many people worldwide.”Alt’s mission was to “speak not only about what was happening in the Gulf of Mexico but also have it relate to the issue of energy consumption and exploitation of the earth's resources worldwide. I tried to find families of various nationalities to support that premise.”The oil-drenched subjects in the photographs stare out of the photos solemnly, and the effect is certainly disconcerting. The viewer is forced to acknowledge the consequences of our indifference regarding the environment, especially with regards to the future. This is especially prevalent in some of the photos featuring young families, whose oil-smeared faces gaze out of the portraits almost coldly, begging the question, what kind of world are we leaving our children? “I always assumed that we would leave this world in better condition than how it was passed on to us,” Alt says. “Now I am not so sure it is possible.”Article provided by MutualArt.com - a personalized art information service covering thousands of sources across the web.
Advertisement
Subscribe for our daily newsletter