Emilio Mogilner fights on in the face of adversity

After surviving two assassination attempts, one of which left him partially paralyzed, artist takes a breath.

By MUTUALART.COM
SEPTEMBER 2, 2010 13:38
Emilio Mogilner
(photo credit: Courtesy of Emilio Mogilner)
Advertisement
Article provided by MutualArt.comArtist and environmental activist Emilio Mogilner fully appreciates the transience of life - especially with regards to his own mortality. The innovative painter and sculptor has survived two assassination attempts, the second of which left his dominant right hand paralyzed, putting his artistic career and lifelong passion in jeopardy. Despite these setbacks, Mogilner has persevered. In addition to sculpting massive installations, the artist continues to paint - without air. Using his left hand, Mogilner paints while holding his breath - a unique technique he developed which, as he explains, allows him to capture “the urgency and lack of time [mankind has] to address crucial social & environmental challenges.” A glimpse into his life offers some remarkable insights into an artist's creative development.The 45-year-old Israeli artist presented his first major solo exhibition in 1992. During the onset of his career, he mainly painted female nudes (see image below), with various postures in strange positions. “I drew many self portraits, and women deformed of body or deforming women. Sometimes I wasn’t even interested in what I was painting, only in the textures,” he says. Mogilner has always been fiercely committed to environmental issues, a passion that has both fueled his art, and conversely, endangered his life. When sand thieves began destroying the environment near his studio, Mogilner decided to take action. “After I tried to stop them, literally placing my body in front of their trucks, an attempt was made on my life. I was shot at. I then realized that I got myself in quite a mess and I felt that my days were numbered.The artist executed his Screams series, in part, as a reaction to what was happening around him. The work was created at the peak of his expressionist phase, and each piece in the series was painted very quickly. “Every few days I painted what I felt when I stood in front of the mirror, out of my inner scream knowing that I have nothing to hold on to,” he recounts. "Each took 15 minutes to several hours to paint. I don’t eat or drink or rest. I don’t leave the canvas until I am done and when I am done, I do not return," he says. 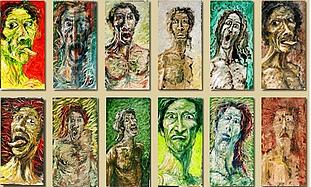 Two days after he completed the final painting of the series and nine months after the first hit attempt, Mogilner’s worst fears came true when he was shot at yet again.This time, he did not emerge from the attack unscathed: he was hit in his dominant right arm, which was subsequently paralyzed as a result of nerve damage. Just two weeks after the injury, Mogilner started painting again, with his left arm. After two years of painting left-handed, however, Mogliner concluded that he was unable to adequately express himself due to his physical limitations, saying he had reached a void and seriously pondered the end of his artistic career. “I didn’t lift a brush for two months,” he says.Then came the conversation that changed his life. “One summer evening,” he recalls, “I was discussing philosophy with my younger brother. At one point he said, ‘time is a breath of air.’ As soon as I heard those words, it was like an epiphany, powerful beyond imagination.”That night, Mogilner drafted the philosophy behind 1-breath time and immediately began to practice it. The idea behind the technique is simple: Mogilner paints on a large canvas while holding his breath for one minute. According to the artist’s manifest, his intent is “to understand the urgency and lack of time we have to address crucial social and environmental challenges. In the same way our breath is dramatically shortened, attempting to conquer a large canvas, so too does mankind's breath shorten, as it conquers mother earth.”The actual 1-breath process is, understandably, difficult for the artist to undergo. Describing his state of mind during 1-breath time paintings, Mogilner says, “When drawing a small painting you feel the pain due to lack of oxygen and you must breathe. But when painting a large canvas, an interesting thing occurs. While painting you are so consumed in the process and your body movements are so grand, the body alarm that tells you ‘I cannot take it anymore’ becomes blurred and you cross the line until you lose consciousness.” Mogilner’s one-breath technique illustrates how this process parallels the current plight of mother nature: “Our planet is suffocating. Humanity has been taking more than it is due, and the effects have already begun to be felt. We must slow down and let the Earth catch its breath.”Without air, the resulting works convey a sense of rushed expectancy, a painful urgency that is brilliantly displayed in vibrant dashes of color. The artist says, “In the dawn of mankind, we had almost no information, yet much time. Today, endlessly bombarded by information and advanced technologies, we have NO TIME.”But the artist’s visionary works are not relegated to painting alone. In keeping with his devotion to conservationism and his passion to create art despite his handicap, Mogilner has also created massive installation pieces from rock, stone and sand. Most notably are his Guardian sculptures, which are a celebration of one of the world’s most famous ancient art treasures. 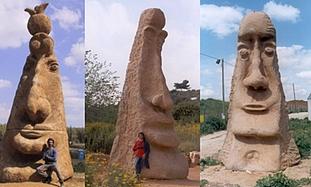 Mogilner’s heads resemble the monumental "Moai" figures of Easter Island in the Pacific Ocean, which were carved in volcanic rock 1200 years ago. It is a UNESCO World Heritage Site with much of the island protected within the Rapa Nui National Park. In recent times, however, the island has served as a cautionary tale about the cultural and environmental dangers of over-exploitation. Mogilner’s Moai-like sculptures have been placed in several locations in Israel which have been exploited by urbanization and industrialization.Instead of sculpting from the outside in, the artist created the statues by sculpting from the inside out, creating a three-dimensional "negative" image of the shape of the guardian in the ground. In a unique technique developed by the artist, he begins by digging a massive hole using a tractor, followed by manual digging using a shovel. He then spends days inside the earth using a kitchen-spoon to extract soil and/or press soil which create the fine details of the face. Concrete is poured into the hole and metal poles are lowered into it. As the concrete hardens the outer-layer, which is in direct contact with the earth, soaks in the reddish-brown sand lending the guardian the appearance of an ancient face.The concrete sets for two weeks and then the statue is pulled out of the ground. This is done using straps that surround the sculpture from underneath through tunnels dug into the earth below it. The guardian then emerges from the ground lifted by a giant crane and is transferred on a tank-carrying trailer to its intended destination for final installation.The artist’s most famous piece from the series is undoubtedly The Negev Guardian - a 450-ton, 17-meter tall sculpture in the heart of Israel’s southern desert. According to Mogilner, “The idea behind the sculpture is to say that there are people with a heart of stone and there are stones with a heart of a human being. I wanted to place it in front of one of the most polluted and toxic spots in Israel - Ramat Hovav. Usually artists seek to place sculptures in urban locations where they can be seen, but since it is located in the middle of nowhere, it is there that people actually notice it and ask ‘why is this here?’”The artist says that the industrial companies at the parks could not object to his installation since he completed a very thorough process and received all the necessary permits. “They even tried to bribe me in a way as they offered that I be in charge of the area’s sculpture park,” he says.That’s not to say that there haven’t been other hurdles to creating these works. In one case, a group of Bedouin workers who objected to the sculpture on religious grounds threatened Mogilner’s life. As a compromise, he reached an understanding with their sheik by which they would be allowed, for a period of five minutes, to take their best shot to destroy the statue with only their arms and legs. In the end the marks of the vandals give it an impression of something ancient and the look as if it has survived a war. “I view it as a complete work,” he says. "I wanted to give it an impression of something ancient and that is exactly what the end result turned out to be. I don’t know of any other artwork in the world in which the artist permitted those who sought to destroy it, to actually do so.” 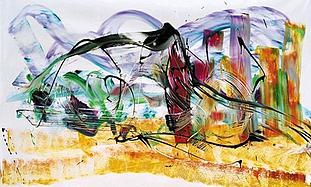 Today he works with a wide variety of mediums and genres: from flash painting in a matter of seconds to creating realist works that can take months to complete. The contrast, Mogilner says, lies within himself. “In the past two months I have created useful sculpture from cement, pools, sofas, artistic. Completely crazy stuff. Now I am back to working with iron."Due to serious health risks, the artist is currently unable to practice his signature 1-breath art. For the time being, Emilio has put aside his “breathless protests,” and states that he simply creates art that manifests his opinions. “If one really wishes to create art, true art, you can only create yourself. Not in the sense of a self-portrait but rather your own unique motion that is not influenced by anything around you.”MutualArt.com is a personalized art information service covering thousands of sources across the web
Advertisement
Subscribe for our daily newsletter