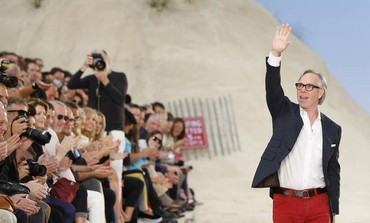 American fashion designer Tommy Hilfiger arrived in Tel Aviv on Wednesday to oversee the opening of Israel's first ever Hilfiger retail store.
The flagship store will be opening in the urban city's developing Sorona neighborhood, which in recent months has scene an extreme face-lift with brand new high class restaurants.
The classic fashionisto reportedly only plans to stay in the Holy Land for 24 hours, and is expected to be staying in the Tel Aviv Dan Hotel's royal suite.
During the short visit, Hilfiger spent quality time with Israeli supermodel Bar Rafaeli, who he has worked with on numerous projects in the past, including a TV documentary series produced by Hilfiger which stars Rafaeli called "Ironic Iconic America."
Advertisement
Subscribe for our daily newsletter