Creative renderings of Miriam’s Cup, will be among the numerous artistic Haggadot and ceremonial objects featured at the upcoming Illuminated Haggada Fair

By FERN ALLEN
APRIL 13, 2014 14:19
Kol HaOt Illuminated
(photo credit: AVNER MORIAH)
Advertisement
If the sages of the Passover story were to open a contemporary Haggada, they probably would be intrigued by the illuminated pages dedicated to “Miriam’s Cup.”Creative renderings of Miriam’s Cup, and scenes depicting the prophetess, will be among the numerous artistic Haggadot and ceremonial objects featured at the upcoming Illuminated Haggada Fair, sponsored by the Kol HaOt organization, at Jerusalem’s Inbal Hotel on Thursday, April 17 (Hol Hamoed), from 5 to 10 p.m.“The images of the prophet Miriam that have appeared in contemporary Haggadot reflect the artists’ creative responses to the important role that Miriam – and women in general – played in the Exodus story,” says Shira Friedman, a curator of Jewish art and culture. “Miriam has become a symbol of a new feminine power, and her persona is taking a central role, on a par with Moses and Aaron. In recent years, this theme has been incorporated into the Passover Seder, as a new tribute and ceremony to women in Jewish history.”The tradition of adding Miriam’s Cup to the Seder began in the 1970s, as Jewish feminist groups in the US were intent on highlighting feminine Jewish personalities, and viewed Miriam as a quintessential inspirational and creative figure, Friedman adds. 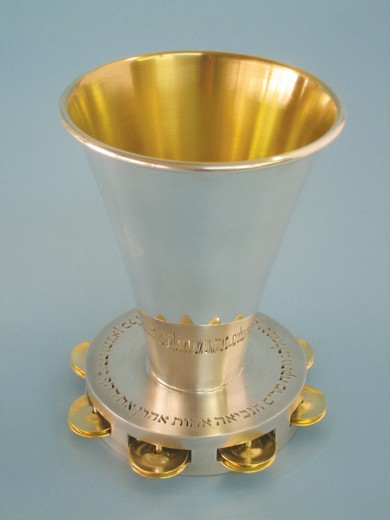 In this relatively new ritual, Miriam’s cup is filled with water, reminding participants that, according to the Midrash, the Israelites had water in the desert throughout Miriam’s life. Seder participants recite: “This is Miriam’s Cup, a cup of living waters – in memory of the Exodus from Egypt. Let us bless the Source of Life, who has given us living waters.”At the Kol HaOt Illuminated Haggada Fair, Friedman will give in-depth presentations of Miriam’s Cup, as seen through art and ceremonial objects, and illuminated Haggadot. This year, the annual fair will be styled as a “Jewish salon,” featuring special stations where several experts in Jewish art will present explanations to the public on other artistic themes in illuminated Haggadot, such as: “You shall teach your children”; the Four Questions; and slavery and freedom. Contemporary Israeli artists – such as David Moss, creator of the extraordinary Moss Haggada – will be at the fair to elucidate the stunning images in their renowned works.“This exciting new ‘salon’ format, which we are introducing to the Illuminated Haggada Fair this year, allows the public to have a more personal, intimate interaction and engagement with the art work and its message,” explains Kol HaOt director Elyssa Moss Rabinowitz.“By choosing a few select themes, visitors will gain a broader perspective of the role of the artist as interpreter, since the facilitators will explore the breadth and variety of how that theme is portrayed in various Haggadot,” adds Yair Medina, a cofounder of Kol HaOt. “This approach will inspire visitors to consider how they would personally understand and express that same theme.”
On the “Miriam’s Cup” page of his striking Moriah Haggada, artist Avner Moriah has created a vibrantly colorful, multi-ringed roundel in honor of women – a visual homage to Rabbi Akiva’s statement that “the Israelites were redeemed from Egypt due to the righteousness of the women who lived in that generation.”In the roundel’s outer ring, he depicts Israelite women defying Pharaoh’s edict against procreation, by entering the fields to seduce their husbands and creating future generations. In the middle ring, Moriah – whose artwork has been acquired by New York’s Metropolitan Museum of Art – portrays the Twelve Tribes of Israel being sustained through the bravery of women. The center of the roundel features Miriam dancing upon crossing the Red Sea.RABBI MATTHEW BERKOWITZ, creator of Passover Landscapes: Illuminations on the Exodus, also found creative inspiration in Miriam’s exuberance at the Israelites’ salvation at the Red Sea. In his limited-edition artist portfolio, which is on permanent exhibit at the Jewish Theological Seminary, he illustrates Miriam standing amid a crowd of women, musical instruments in hand, dancing to celebrate their redemption. He bases his illumination on the verse, “Then Miriam the Prophetess, Aaron’s sister, took a timbrel in her hand, and all the women when out after her in dance with timbrels” (Exodus 15:20-21).Artist Avi Biran, a winner of the Israel Museum’s Jesselson Prize for Contemporary Judaica Design, has created a regal sterling silver Miriam’s Cup, which interlaces several biblical images associated with the prophetess.He highlights the importance of Miriam’s ecstatic dance at the Red Sea with miniature tambourines at the base of the goblet, “so when you shake the cup, sounds of joy are heard,” he says.He intentionally structured the cup so that it intersects with the center of the tambourine, to represent a well dug through the ground. In this way, his cup symbolically integrates a Midrash that says that Miriam is called a prophetess because she could locate underground water sources during the Israelites’ journey through the desert.Kol HaOt, a Jerusalem-based organization established in 2009, sponsors a variety of interactive programs, which combine the magic of the visual and performing arts with Jewish texts and ideas, history and values.“Our mission is to expose the general public – whether they are tourists to Israel, or the local population – to the depth and creativity of Judaism and Jewish sources through the engaging and accessible prism of the arts,” says Rabinowitz.Kol HaOt’s offerings, in addition to its annual Illuminated Haggada Fair, include interactive, Jewish educational art workshops for tourists, musical and theatrical performances on Jewish themes, and films on contemporary Israeli moral issues.The Kol HaOt Illuminated Haggada Fair is open to the public, and admission is free.The writer is director of communications at Kol HaOt – Illuminating Jewish Life through Art.
Advertisement
Subscribe for our daily newsletter