Making a name for himself

With small strokes, Jacob El Hanani is leaving a big mark on the art world.

By JPOST.COM STAFF
MARCH 1, 2010 22:24
Jacob El Hanani 311
(photo credit: Nanette Shaw)
Advertisement
NEW YORK – When I mention the name Jacob El Hanani to an art critic friend, she exclaims, “He’s the guy who makes those little lines.” So I ask El Hanani, the Casablanca-born Israeli artist whose work has achieved international recognition, how he feels when people say that about him. “Fantastic!” comes his warm response. “We cannot achieve everything. If I am known as the artist who brought drawing to its most minute element, I’ll be happy.”Indeed, the lines in his drawings are so minuscule that to look at them from more than a foot away, all one notices is a field of gray. They’re like a window screen or a piece of fabric, framed and mounted on white.El Hanani urges me to move right up to a drawing titled “Jacob El Hanani from the Signature Series 2001,” and when I’m practically standing on top of it I see that it’s a repetition of Hebrew letters. It’s his name, perfectly etched in tiny calligraphic wisps until the entire canvas is awash with Jacob El Hanani.While one can discern extreme narcissism, conceivably even megalomania, the artist sees himself as a guardian, protecting an aesthetic tradition in which everything is handmade. In Italian it’s called tutto fatto a mano he explains.The drawing El Hanani is showing me is a micrograph, utilizing a technique that Jewish scribes have used over the centuries to decorate and transcribe holy texts. It is one of many such drawings in the artist’s Signature Series. Just how he developed the technique leads to one of his many apocryphal tales.“The micrographic drawings started years ago when I was 10 years old, when we were punished at school because the whole class made a lot of noise,” El Hanani recalls. “So the teacher demanded that we copy the “Song of Deborah” from the Bible 40 times. But I didn’t want to waste 40 pieces of paper, so I brought the teacher one page. ‘Where are they?’ she asked. So I told her to look carefully – 20 on one side and 20 on the other, written very, very small.”The artist explains that paper was very expensive in the Israel of the 1950s. “Remember, there were no trees.”After studying in Tel Aviv at the Avni School of Fine Arts, then at the Ecole des Beaux-Arts in Paris, El Hanani arrived in Soho. At the time, in the early 1970s, New York was an important center for art. For the young artist, it was the only place he felt his work could be discovered.He still lives in his first studio, which he initially shared with another artist and six garment workers. At the time it was an empty factory without electricity, forbidden for human habitation.Coming to America as an illegal immigrant, he was, as he describes it, “poor and unable to buy art supplies.” Paper and ink – the materials he uses to this day – were the least expensive media. And he eliminated representational elements from his drawings. “There was almost a fascist movement against figurative art – against pleasing art. We had to hide the fact that we knew how to draw.”Rejecting narrative elements and stripping art to its fundamental elements were aspects of Minimalism. And El Hanani was drawn to pioneers of the movement, such as Sol LeWitt, Robert Ryman and Carl Andre – “very tired” artists, in El Hanani’s opinion. “Walking in the streets of New York, seeing the thousands of people, the windows, the cars – they just wanted to rest their eyes.”One can see their influence in his drawings, which from a distance look like silver-gray monochromes. Yet he does not consider himself a Minimalist.“An artist should not categorize himself,” he interjects. “On some level I opposed Minimalism. Some call me the grandfather of the micro drawing.” 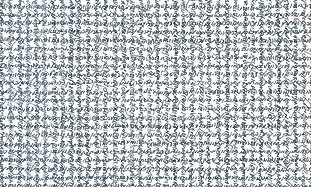 FROM EL HANANI’S point of view, the process is more important than the work itself.“One of the biggest joys is to face the white paper,” he says. “It’s very much like standing in front of the bimah (the raised floor of a synagogue, usually where the ark is and from where services are conducted) in the sense that it is a holy moment, an exciting moment in which you face a new white space. Once you’ve done it you have the hard labor.”And in El Hanani’s worldview, the intimate process of laboring over each stroke of the pen is what his art is all about, for it’s precisely the issue of execution that stirred his reaction against the Minimalists, believing they neglected its significance. In fact, El Hanani becomes wide-eyed and adamant when he talks about artists who use assistants. “Their work could be done by phone,” he says. “I emphasize the execution more than the idea.”But the drawings themselves, those methodically arranged grids and patterns, would prompt anyone to wonder if a computer could do the same, or even better.“The difference between man-made and machine-made are the mistakes,” he explains, adding that computers are not affected by “mood, weather, telephone interruptions, or the spread of the ink. There’s no question about it, that being born in the third world, in an Islamic country, we were more exposed to detail than [they were] in industrial Europe, where everything was done by machine.”Indeed, the intimate detail in his drawings – sometimes compared to Persian tapestry for their intricacy – speaks to the culture in which he was raised.“My grandmother made very small couscous; cut the salad into very small pieces. When I looked at the tefillin and mezuza, I saw that there was very small writing inside.”In addition to biblical drawings, El Hanani found inspiration in the works of Albrecht Durer, the Nuremberg painter and printer from the 15th and 16th centuries.“I started by making figurative drawings with ink on a piece of paper on a little table on a small balcony in Israel where there was only neon light,” he says. “And I was able to spend two to three weeks on a painting.”The discipline and time it takes to execute thousands and thousands of mite-size marks speaks specifically to the perception of time. Describing El Hanani’s drawings at a 2003 gallery exhibition, Boston Globe correspondent Cate McQuaid wrote: “They echo time in its unyielding, uncountable increments, and in the flood of its passing. Each gesture could be a breath; the entire drawing, a life. Ultimately, these are spiritual works, each an exhalation, a surrender to the power of repetition and of life marching on.”

The process is indeed arduous, and El Hanani claims that endurance and repetition mean much more than inspiration.“A man has to persist when he wants to conquer,” he says. “You have to endure and you have to have stamina.”