Set in a mythic New York City and spanning more than a century, Winter’s Tale is the story of miracles, star-crossed destinies and the age-old battle between good and evil. 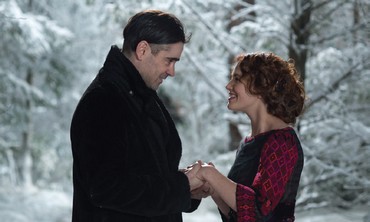 FILM 1. AGE-OLD BATTLE Set in a mythic New York City and spanning more than a century, Winter’s Tale is the story of miracles, star-crossed destinies and the age-old battle between good and evil. A thief falls in love with an heiress as she dies in his arms. When he learns that he has the gift of reincarnation, he sets out to save her. With Colin Farrell, Jessica Brown Findlay, Russell Crowe, Will Smith. 2. HITCHCOCK’S SILENT FILMS Nine of Alfred Hitchcock’s films from the silent era, restored by the British Film Institute, will be presented as part of this year’s British Film Festival.The films will be screened at the Jerusalem, Tel Aviv and Haifa cinematheques from February 20 to March 15. The films will be accompanied by live music, performed by a number of Israel’s leading musicians.DANCE 3. INTERNATIONAL ARRAY The Clipa Aduma International Festival returns for the seventh time, presenting dance-theater works by local and international artists. From Japan, Butoh dance artist Taketeru Kudo brings MEN (Japanese: Dimension, Mask), a site-specific performance created and adapted to its location. Other performances include the Do Theater Group from Germany, who will perform Upside Down; and Fragile by the Czech group Krepsko. There will also be workshops for dancers.February 19 to 24. For tickets, go to www.clipa.co.il.

FESTIVALS 4. VALENTINE WEEKEND The Herzliya Arts Center celebrates a Weekend of Love, offering a host of concerts and performances, such as Gidi Gov and his greatest hits (Friday at 10 p.m.) and the Israeli Ballet’s performance of Beauty and the Beast (Saturday at 11 a.m.).For a full program, go to www.hoh-herzliya.co.il or call 1-700-702-929.

MUSIC 5. THREE’S THE CHARM The Israel Conservatory of Music in Tel Aviv is holding a concert with the Mondrian Trio (pianist Ohad Ben-Ari, violinist Daniel Bard and cellist Hila Karni).On the program: Trio with Variations; Beethoven’s “Kakadu Variations” for Piano Trio; Mieczysław Weinberg’s Piano Trio; and Schubert’s Piano Trio No. 2. NIS 105- 130. Free for those under 21.Next Thursday at 8:30 p.m.6. FOLLOW THE ACCORDIONIST French accordionist Vincent Peirani will appear at the Eilat International Chamber Music Festival. The international jazz musician will perform with French cellist Francois Salque. The program includes works by Grappelli, Piazzolla and Bloch.February 27, Tarshish Hall, Dan Eilat Hotel. For tickets and a full program: (08) 644-4816 or www.eilatfest.com THEATER 7. CRUEL CHARACTER Shakespeare’s cruel tragedy Titus Andronicus will be produced in Israel for the first time, with Dan Turgeman in the title role. This was Shakespeare’s first tragedy, which revolves around a Roman general and his violent acts of revenge.Saturday at 8:30 p.m. at the Arab-Jewish Theater in Jaffa. For tickets, call (03) 518-5563.

ART 8. GHOSTS AND GOBLINS New at the Rokah House Gallery in Neveh Tzedek, Tel Aviv, “Dark Rooms” is a group exhibition that takes visitors on a mysterious journey of fantasy and horror. Six top things to do 10 4 5 6 7 1 2 3 8 February 13, 2014 5 weekend contemporary artists present works that conjure up the Dark Romantic artistic movement, which dealt with the supernatural.

Opens Saturday at 7 p.m. at 36 Shimon Rokah Street, Tel Aviv, (03) 516-8042 9. PORTRAYAL OF A HERO “27 Faces of Raoul Wallenberg” is a portrait exhibition initiated by the Swedish Embassy, dedicated to the Swedish humanitarian. It will be held at the home of the Swedish ambassador. The works were created at a workshop for Bezlael Art Academy students, led by artist Jossef Krispel.February 20 and 23-25, between 10 a.m. and 2 p.m. Free. To book an appointment, email anette.shary@gov.se

UPCOMING MUSIC  10. DO THE WRIGHT THINGAmerican jazz/R&B singer and composer Lizz Wright will perform at the next concert in the Jazz at the Mishkan series.In her Israeli debut, she will present an evening of contemporary jazz, as well as jazz classics, gospel and R&B. Wright will perform with pianist Kenny Banks, guitarist Robin Macatangay, bassist Nicholas D’Amato and percussionist River Paul Guerguerian.February 28 at 10 p.m. at the Opera House, Tel Aviv. For tickets, call (03) 692-7777 or go to www.israel-opera.co.il.