Matthew Bourne’s 1995 masterpiece Swan Lake, a dance piece that has wowed crowds and critics around the globe, arrives in Israel. 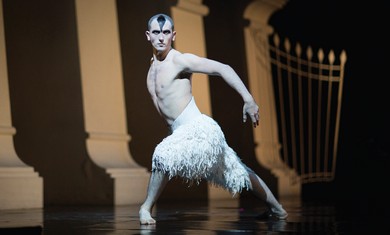 FILM
Days of Future Past
1. MUTANT PRIDE The ultimate X-Men ensemble fights a war for the survival of the species across two time periods in X-Men: Days of Future Past. The characters from the original X-Men film trilogy join forces with their younger selves from X-Men: First Class in an epic battle that must change the past – to save their future. With Patrick Stewart, Ian McKellen, Hugh Jackman, James McAvoy, Michael Fassbender, Jennifer Lawrence, Halle Berry.DANCE 2. FILLING THE VOID The Batsheva Dance Company presents Virus as part of the Tel Aviv Dance festival at the Suzanne Dellal Center. The awardwinning piece by Ohad Naharin was inspired by Peter Handke’s play Offending the Audience, which annihilates all the conventions of theater as we know it. Naharin explores the void created by the play.Friday at 2 p.m. Saturday at 9 p.m. Sunday at 7 p.m. Monday to Thursday at 9 p.m.3. POLITICALLY CORRECT As part of the Israel Festival, Hofesh Shechter’s Dance Company arrives from London with its new work, Political Mother. In it, Shechter returns to his most characteristic theme, puzzling over the mechanisms of state and society; but his focus here is on the ways in which ideals of camaraderie, duty and service can be annexed and brutalized by a repressive power.May 29 at 9 p.m. and May 30 at 2:30 p.m.at the Jerusalem Theater. For tickets, call *6226.4. DANCING ON THE FRINGE Haifa hosts its first Fringe Dance Festival on May 25 and 26. The two-day festival is chock full of dance performances, documentaries and workshops, including a GaGa dance workshop. Among the highlights are Ido Tadmor, Rachel Ardos, Orly Portel’s Company and Daffi Altabeb. The events will take place at Rapaport Hall, Hecht Hall and the Haifa Cinematheque.For a full program and tickets, call (04) 833-8888 or go to www.ethos.co.il

MUSIC 5. A TRIBUTE TO COLE PORTER Grammy Award winner virtuoso saxophonist Vincent Herring arrives in Israel for a week of performances as part of the Hot Jazz series. He will present a program of music by Cole Porter, including many songs adapted to the saxophone. Local musicians Yonatan Riklis (piano), Max Vater (bass) and Shay Zelman (percussions) will join him for six concerts.Monday at the Jerusalem Theater; Tuesday at the Herzliya Zappa Club; Wednesday at Einan Hall in Modi’in; May 29 and 30 at the Tel Aviv Museum of Art; and May 31 at Abba Khoushy Hall in Haifa. http://cartis.

bravo4u.co.il/announce 6. LOVE AT THE OPERA Rigoletto returns to the Israeli Opera in a production that won the hearts of local audiences.Directed by David Pountney, with Israeli conductor Daniel Cohen and a cast of local and international soloists.Until May 30 and June 25 to 30. Opera House, Tel Aviv 7. A NEW LOOK AT THE RENAISSANCE The Hortus Art Jazz Ensemble, headed by the high-energy Estonian conductor-violinist Andres Mustonen (pictured), presents the “Love Dance and Battle” concert as part of the Israel Festival.Mustonen and his musicians will perform Renaissance and early Baroque works that hail from Germany, Italy, England, France and Spain.

8. CHAMBER MUSIC IN THE CAPITAL The ninth concert of the Jerusalem Music Center’s season will host the Londonbased Belcea Quartet, led by founder Corina Belcea. With violinist Axel Schacher, cellist Antoine Lederlin and violist Krzysztof Chorzelski. On the program: Webern, Brahms and Schubert.May 29 at 8:30 p.m. at the YMCA in Jerusalem, (02) 624-1041 9. FABULOUS FADO The Jazz and World Music category of the Israel Festival features fado singer Cristina Branco from Portugal. In the concert titled “Idealist,” Branco sums up 9 8 out & about 10. SCINTILLATING SWANS Matthew Bourne’s 1995 masterpiece Swan Lake, a dance piece that has wowed crowds and critics around the globe, arrives in Israel as part of the Dance in the Mishkan series of the Israel Opera House.This modern-day take, which gives a fresh and bold interpretation to the iconic ballet, has become a modern classic, winning more than 30 international prizes.

June 3 to 10 at the Opera House, Tel Aviv. For tickets, go to www.israelopera.co.il.