By LAHAV HARKOV
weekly schmooze 311
(photo credit: Courtesy)
Advertisement
Passover is half-way through, but there's still time for some fun holiday videos. The Charles and Lynn Schusterman Family Foundation produced this adorable animated clip of kids telling the story of the haggada in their own unique way.    Next we have a seder-related version of "I Want To Be Sedated" by Jewish Ramones cover band The Shlomones.  If you're visiting Brooklyn over Chol Hamoed, you won't have to worry about parking – at least not more than you usually would on a Jewish holiday in one of the most Jewish places outside of Israel. The filming schedule of "The Amazing Spider Man 2" – starring Jewish actor Andrew Garfield as the title character - was changed, after the haredi community in Williamsburg asked the movie's producers not to film in the Marcy Avenue Armory during Passover. The New York Post quoted Councilman Stephen Levin (D-Brooklyn) as thanking the Spider Man crew for "passing over" filming during the holiday and for "letting my people park." 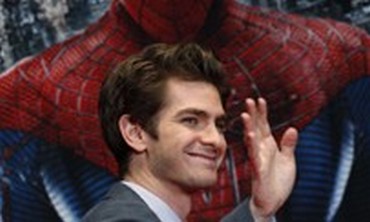 MK Stav Shaffir (Labor) showed off some hidden musical talent this week, after meeting Peter Yarrow of Peter, Paul and Mary. The recorded a Happy Passover message and sang Bob Dylan's "Blowing in the Wind," with the Labor MK displaying serious harmonizing abilities.Prom season isn't too far away, and Jake Davidson, a 17-year-old Jewish high school student from Los Angeles, decided to aim high when it comes to dates, preparing a funny video asking supermodel Kate Upton out. First, she indicated on twitter that she'd go.

“@jakedavidson23:youtube.com/watch?v=NvxqUE…” you can call me Katie if you want! How could I turn down that video! I'll check my schedule ;)

Then, the two chatted on The Today Show.Was Joseph Gordon-Levitt the most enthusiastic "Jeopardy" participant ever? Buzzfeed seems to think so, documenting the entire 1997 celebrity episode to great hilarity. Gordon-Levitt didn't win, but he made up for it with nerdy charm. Last but not least, if you have 44 minutes free, someone took the time to anthologize every single "um" and "uh" and "err" Woody Allen ever made in a movie. It's the essence of Allen, distilled into one YouTube video.If you have any news to share with The Weekly Schmooze, write to: [email protected]