Hillel Cohen’s account of Israeli Arabs during the first 19 years of the state is a fascinating tale, but it does not make for pleasant reading.

By DANIEL GAVRON
FEBRUARY 5, 2010 17:20
good arabs 311
(photo credit: .)
Advertisement
Good ArabsBy Hillel Cohen | Translated by Haim Watzman | University of California Press | 280 pages | $27.50In 1965, when I was living in the new town of Arad in the Judean desert, my wife and I invited Mansur Kardosh, the secretary of Al-’Ard (The Land), an illegal Arab political party, to lunch. Kardosh, who had been exiled to our town for the period of the general election campaign, turned out to be a pleasant gray-haired man, who presented strong Palestinian nationalist principles with a winning charm and humor.Such views were rarely voiced in those days, and we found his ideas interesting and challenging, but the thing that struck us more than anything else was his gratitude. He praised us extravagantly for our modest hospitality. Later when we enjoyed a delicious lunch with him and his wife Yvonne in their Nazareth home, we were introduced to friends and neighbors as “the couple who invited me in Arad.”Subsequently, in my book Walking Through Israel, I wrote: “At the very most I was risking mild social disapproval by inviting this ‘Arab extremist’ to lunch, but, in his paranoiac state at the time, what he termed my ‘humanitarian gesture’ seemed to him an example of civic courage on a par with that of a Solzhenitsyn or a Sakharov.” Today, after reading Good Arabs by Hillel Cohen, I find myself wondering whether I wasn’t being too flippant about my behavior and his response. Over the years as a journalist and author, I have written extensively about Palestinians on both sides of the Green Line, but I admit that I had not realized the extent of Israeli penetration and control of Israel’s Arab citizens in the early years of the state.Cohen’s Army of Shadows described Palestinian collaboration with the Zionists in the pre-state period. The present volume deals with the first 19 years of the state. When it was published in Hebrew in 2004, The Jerusalem Post reviewer called it “an impressive achievement” and praised it for “its equal and honest treatment of the explosive issues involved.” I can only echo this accolade: Cohen paints a remarkably balanced and comprehensive picture of the complex relationship between Israel’s Arab citizens and the authorities. It is a fascinating tale, but his account of espionage, patronage, bribery, treachery, deception, smuggling, infiltration, intimidation, threats, double dealing – and often murder – does not make for pleasant reading. Neither we Israeli Jews, nor our Arab fellow citizens, can take much pride in the story. 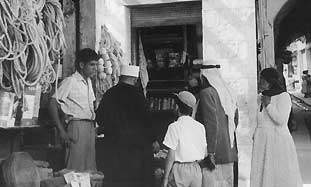 To be fair, the situation in 1949, after Israel had signed armistice accords with its neighbors, was one of enormous complexity for which neither side was adequately prepared. The Jews were now in charge of a sovereign state; the Arabs, formerly a majority in a British ruled-territory, found themselves a minority in the new Jewish entity, much of their land confiscated, restricted by the so-called “Military Government” in most of the areas where they lived. Some 700,000 Arab refugees – in those days not yet called “Palestinians” – were located on the borders, hoping to return to their homes; a similar number of Jews were flooding in, both Holocaust survivors from Europe and new refugees from the Arab and Muslim nations of the Middle East. Against this impossible background, the two sides struggled to cope with the new situation.The author makes a genuine effort to understand the motives and considerations of both Arab and Jew. On the political level, the Communist Party, while recognizing the Jewish state, presented the Arab nationalist alternative to the supporters of the ruling Mapai (forerunner of today’s Labor Party), some of whom were opportunists, but many of whom genuinely thought that by collaborating with the authorities they were serving their community and acting in its best interests.The most dramatic issue was the infiltration of the border by refugees, who killed more than 200 Israeli civilians in the first eight years of the state’s existence. During that same period, thousands of infiltrators were killed by the security forces. Cohen notes that most of the infiltrators were not murderers. Many of them wanted to return to their homes and families, or to harvest crops that they had sown; others were forced into becoming smugglers, rustlers and thieves by their extreme poverty.One fascinating result of the continuous penetration of Israel’s border in those early years was a unilateral Arab implementation of the “right of return.” More than 20,000 of the infiltrators would eventually gain Israeli citizenship, increasing the nation’s Arab population by some 15 percent. This, in Cohen’s view, was partly the result of international pressure, but also reflected the humanism or ambivalence of some of the country’s leaders.The narrative of the Israeli Arabs is very far from being a success story. In many ways it represents a gigantic missed opportunity. Military government was abolished in 1965, but land confiscation under various pretexts has never really stopped. Nevertheless, while condemning much of the country’s policy toward its Arab citizens, there are aspects that deserve some praise.“Despite the imposition of military rule on Arab areas and blatant discrimination against Arabs,” writes Cohen, “Israel possessed certain traits that made it attractive to some of its Arab citizens... Israel’s democratic ethos established red lines that its security agencies could not cross and also allowed Arabs to petition the courts to protest their rights (sometimes even successfully).”Today, after the Six Day War and 42 years of Israeli presence in theWest Bank and Gaza, the state of affairs has not changed much. A numberof NGOs, such as Sikkuy and Adalah, have taken over the civil rightsstruggle, and they have made some gains. Although the admirable OrCommission report has been published and adopted by the government, ithas not been implemented. The situation remains far from satisfactory.Yet surprisingly, a recent poll, conducted by Harvard University’sKennedy School of Government, found that 77 percent of Israeli Arabswould rather live here than anywhere else. That is a pretty good baseon which to start building a new relationship of equality and mutualrespect, but a huge amount remains to be done. Reading Cohen’s book isa good start to understanding the complexity of the problems involved.The writer’s most recent book is Holy Land Mosaic (Rowman & Littlefield, Lanham 2008).
Advertisement
Subscribe for our daily newsletter