We have come here to remember, and despite the fact that most of us are not survivors of the Holocaust of European Jewry,

By KKL
APRIL 14, 2010 17:13
1
(photo credit: kkl)
Advertisement
Australian Gold Patrons Delegation Commemorates Holocaust and Heroism Remembrance Day in Israel
The Australian Ambassador to Israel: "As Australians we must always
fight injustice and stand up for what is just and right."
A group of several dozen men, women and children stood at the feet of the lookout tower in the Yizkor Forest on Mount Carmel on Holocaust and Heroism Remembrance Day.  They stood with heads bowed as the siren sounded, marking the nationwide two minutes of silence on the day dedicated to the memory of the Holocaust and its victims.  The group had come to Israel all the way from Australia to be with the people in the State of Israel on this particular day."We have come here to remember, and despite the fact that most of us are not survivors of the Holocaust of European Jewry, we are here today together with the citizens of Israel, with the survivors who live in the State of Israel, and with members of the younger generation.  It is important to us to ensure that the history of these past events becomes part of what will help anchor Jewish identity in the future, and that it will be part of the heritage of the next generations," said Joe Krycer, State Director of JNF Victoria, Australia.  "We have the great privilege of not only being Jews, but of being here in the State of Israel, and of consistently supporting the State and the quality of life of its citizens.  We are blessed with the ability to identify with the Jewish People and with the State of Israel and to be connected to them both." 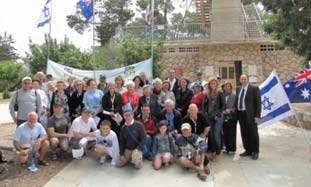 An atmosphere of sadness, attentiveness and personal contemplation of memories, pictures, and stories from the years of the Holocaust of the Jews of Europe prevailed at the feet of the lookout tower overlooking the coastal plain from Zichron Ya'akov to Haifa as well as the Carmel Forest.  Before the ceremony began, members of the delegation toured the main memorial site inside the lookout tower.  The memorial bears the names of hundreds of relatives of Australian Jews who were among the six million Jews murdered as part of the satanic plans for the "final solution" Andrea Falkner, the new Australian ambassador to Israel, was honored to accept the invitation to participate in this intimate ceremony together with her fellow Australians.  "This is a day that incorporates a lot of sadness, a day on which there is no one who does not remember the six million people who died in the Holocaust, either collectively, or as individuals, or as close or distant relatives.   Last night I participated in the official ceremony at Yad Vashem.  The President of Israel, Shimon Peres, and Prime Minister Benyamin Netanyahu both spoke movingly.  However, I was most moved by the stories of the survivors who spoke at the ceremony.  All of them talked about the need to perpetuate these personal stories for future generations and for the entire world.  As Australians, we must always remember to stand up against any human injustice, and to work for what is right and just.  We must remember how the Prime Minister of Australia at the time of World War II allowed Holocaust survivors to enter Australia.  We must remember the unique contribution the survivors and their families have made since then to Australian society and to the connection between Australia and the State of Israel.  We must recall how these people integrated into Australian society with humility and gratitude, and listen to their stories.  I am honored to be a part of this ceremony."Nina Peer, aged 10, who came to Israel with her parents Hana and Gary, read a passage from the diary of a child written during the Holocaust, and Danielle Nahum read the poem "Blessed is the Match" by Hannah Senesh.
Dr. Abe Winter, a member of the delegation, recited the prayer "El Malei Rahamim" (God, Full of Mercy), and ended the ceremony by reciting the "Kaddish."  The ceremony included songs that were written during the Holocaust or following it, which were sung by a young singer, Einat, who has recently completed her military service and received the distinguished title of "Excellent musician."  Sara Gold, President of JNF Victoria, Australia, was given the honor of planting an oak tree together with Ambassador Falkner on the edge of the area near the lookout tower.  "This is the first time in my life I've ever planted a tree," said the ambassador, smiling.  "You'll have plenty of other opportunities to plant trees," the KKL-JNF representatives promised. At the end of the ceremony the members of the Gold Patrons Delegation from Melbourne found it difficult to leave the site.  Ambassador Falkner talked with several of them and asked them to talk about their activities and actions on behalf of KKL-JNF.  Sara Gold said that some of the participants in the delegation were visiting Israel for the first time, while others had joined the delegation at the last minute.  "There were some who were against the idea of participating in the delegation at first because of what they remembered from their last visit to Israel forty years ago.   They were disappointed with what they saw at the time.  Now, after they decided to come, they are simply amazed with the changes that have taken place in Israel since their previous visit, and none of them regrets coming."The members of the delegation are among the main contributors towards several significant projects of JNF Australia in Israel. Right now, the most prominent one is the modern bio-filter project in Kfar Saba designed to purify rainwater harvested from the city streets and to recycle it for agricultural use and for rehabilitating wells from which water can no longer be pumped because of a decline in the quality of the water. Commemorating Righteous Gentiles
Shortly before the ceremony began, Joe Krycer asked to tell the other members of the delegation a moving and exceptional story that was not yet known in Israel.  "One of the contributors, a Holocaust survivor named Adler, who asked to commemorate the names of his relatives who were murdered in the Holocaust at this site, as well as the names of other family members who died in Australia after the war, came to me with an exceptional request. 'I would like to make a separate commemoration for several people who are of special importance to me, and to whom I owe my life.  One is the Righteous Gentile Raoul Wallenberg.  The second are two village women who gave me bread to eat.  The third is a German soldier who gave me his boots during a death march that I took part in and in this way saved my life.'"     Krycer explained that he had objected to the request at first becausehe felt that it was not appropriate to commemorate the memory of aGerman soldier alongside the victims of the very regime of which thatsoldier was part of.  But the survivor insisted.    In the end a modestplaque was place among the hundreds of memorial plaques that reads,"The Righteous who helped save me and some my family: Raoul Wallenberg,The two women from Gratz, Austria, who fed starving Jews, The unknownGerman soldier who gave me his boots on a forced march, thus saving mylife.'""What convinced me was the fact that this Unknown Soldier paid forgiving his boots to a Jewish prisoner with his life.  He was shot infront of the other prisoners during the death march," said Joe Krycer.
For Articles, comments or use please contact Ahuva Bar-LevKKL-JNF – Information and PublicationsEmail: ahuvab@kkl.org.il  Phone: 972-2-6583354 Fax:972-2-6583493 www.kkl.org.il/eng
Advertisement
Subscribe for our daily newsletter