Israeli clothing store Hoodies' racy ad featuring the Israeli supermodel will only be shown after 10 p.m.

By JTA
APRIL 2, 2014 11:41
Bar Refaeli in bed with a muppet for the Hoodies commercial
(photo credit: YOUTUBE SCREENSHOT)
Advertisement 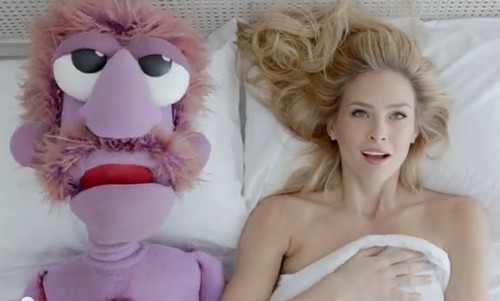 Bar Refaeli in bed with a muppet for the Hoodies commercial Photo: YOUTUBE SCREENSHOTA risqué ad featuring Bar Refaeli in bed with a purple, mustachioed Muppet has been banned from running before 10 p.m. in the holy land, Walla!, Israel news website reported. Per a governmental council called The Second Authority for Television and Radio, the ad for local fashion brand Hoodies has “too many sexual insinuations” to be seen during prime time.The spot opens with a post-coital shot of the Israeli super model and her puppet friend, a guy named Red Orbach, with whom many Israelis are already familiar. For some background on the swarthy Muppet, we turn to The Hollywood Reporter:
"The character Red Orbach emerged locally from an all-puppet classic rock group called Red Band and his stereotypical persona is that of an aging 1960s American rocker. This past year, Red Orbach co-hosted late-night The Red & Dvir Show with actor Dvir Benedek on Channel 2’s franchiser Reshet Broadcasting."
Anyway, the purple rocker/TV host/skilled lover goes on to imagine what it would be like to be dating not one, but THREE Refaelis. This involves sexy scenes from a car wash (referred to here as a “Bar wash”), a photo booth and a game of strip poker.R-rated, weird or both? You decide.