By KKL-JNF
JUNE 17, 2010 15:39
KKL
(photo credit: KKL)
Advertisement
The magnificent panoramas of Beit Keshet Forest in the Lower Galilee served as a perfect backdrop for dedicating the Forester's House complex and adjacent recreation grounds in memory of Dora and Marcus Van Der Straaten of Perth, Australia, who were staunch supporters of JNF Australia. On Sunday, June 13, members of Dora's family from Israel and Mr. Stuart Silbert, a close friend who was also Dora's solicitor, met at the newly dedicated site to unveil the plaque in Dora and Marcus' memory and to recall these two unique people, whose love for Israel was unwavering.Mr. Ze'ev Kedem, Director of KKL-JNF's Fundraising Division, was the master of ceremonies and introduced Dr. Omri Boneh, head of KKL-JNF's Northern Region: "Beit Keshet Forest is very high on Omri Boneh's priority list. The Nazareth Ilit municipality wanted to build here, but Omri said, 'If we develop the forest and make it an attractive recreation area, the local residents won't let them destroy nature.' He was right, and now it is a beautiful site with many scenic lookouts, which in the winter is covered with a carpet of magnificent wildflowers."  Omri Boneh spoke about the history of the region and Beit Keshet Forest: "Beit Keshet Forest is located in the Nazareth region of the Lower Galilee. The first attempt to settle this area was 110 years ago, when the village of Sejera was founded nearby. In 1905, David Ben Gurion, Israel's first prime minister, lived here for a year. The son of our first president fell here in a battle, when he and six of his friends were attacked by local Bedouins, and he is buried in Kibbutz Beit Keshet. "In 1940, KKL-JNF purchased land in this region and began afforestation. In this small building, foresters dreamed what could be here, and now it is a forest that is an integral part of the Galilee. The Trans-Israel trail passes through the site, along with biking paths. It is the local focus of outdoor activities for both Arabs and Jews who live in the vicinity. On behalf of KKL-JNF, I can assure you that the forest will continue to play a meaningful role for local residents."Mr. Yaakov Attiya, Dora's nephew, shared the story of Dora's life with the audience: "It is very moving for our family to be at the ceremony dedicating the Forester's House complex in memory of my aunt Dora and her husband Marcus, who were great lovers of Israel. As an Israeli citizen born and bred in Israel, I was always amazed by this wonderful couple, who lived thousands of kilometers away in Australia, but still loved our country and stayed connected to it through KKL-JNF. Dora and Marcus were Zionists who cared about everything that happened in Israel, good or bad. 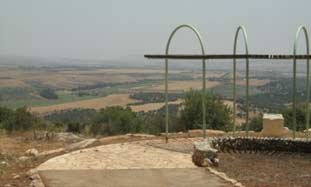 "Dora was the youngest of seven brothers and sisters. She was born in Istanbul in 1924 to my grandfather Eliyahu and my grandmother Reina. With the fall of the Ottoman Empire after World War I, my grandfather moved his business to Germany, while Dora stayed in Istanbul, where she was raised by my mother Rosa, who was twelve years, her senior."Grandfather Eliyahu had always been a Zionist, and after the Nazis came to power in Germany, my grandfather moved with his family to what was then Palestine, bringing Rosa and Dora with them. When Germany began military operations in western Africa, Dora made a decision that was to change her life. She decided to join the Jewish Brigade of the British army in 1942, when she was only seventeen, without her parent's permission. She served as an assistant nurse in Cairo, where she met and fell in love with Marcus."When the war ended, Dora and Marcus moved to Australia. She was in close contact with my mother Rosa until my mother passed away in 2004. During the 1970s, Dora and Marcus visited Israel a number of times and kept in contact with Israel through letters. We, her nephews, miss them and are proud of their unconditional support of Israel, and of their contribution to KKL-JNF, which is such an important organization. We would like to thank Rob Schneider and JNF Australia, along with KKL-JNF here in Israel, for commemorating Dora and Marcus at this beautiful site."
Mr. Stuart Silbert, Dora's solicitor, who was very close to her in the last years of her life, spoke about Dora's connection to Israel: "Dora was a very special person. She told me that she hired me because she liked how I look – very Jewish. Dora and Marcus had no children of their own, so when it came time for her to write her will, I asked her who she loved. She answered, 'Rosa's children, Marcus' nieces in Australia and the state of Israel,' so it was only natural for her to bequeath money to Israel through KKL-JNF. I asked my good friend Rob Schneider what project he would recommend dedicating to her memory, and he suggested Beit Keshet forest. "Dora would have liked the idea that her money helped restore a little house in Israel, because she was someone who was very attached to her own house, where she stayed as long as she could. She would also be proud of the picnic grounds, because they are where families have a good time together, and family ties were something very important for her. She loved her family and Israel, and she died a contented woman."With the support of JNF Australia, KKL-JNF rehabilitated and restoredthe old house, developing the central forest picnic ground in thebeautiful old forest around it. Groups of picnic tables were set upamong the trees, five of which are designed for the convenience ofpeople with disabilities. There is a magnificent scenic lookout about400 meters away from the Forester's House, from which one can see MountTabor and the valley beneath it. KKL-JNF paved a circular 800 meterscenic path connecting the picnic area to the lookout, which is alsoaccessible to people with disabilities. After the ceremony, Stuart said that supporting Israel was also atradition in his family: "I've been collecting Blue Boxes for KKL-JNFfor the past 43 years. My great-grandfather moved from Bialystok toAustralia in 1906 after a pogrom. He had a great love for Israel thathe instilled in his descendents. For me, supporting Israel in theDiaspora means supporting JNF."
For Articles, comments or use please contact
Ahuva Bar-LevKKL-JNF – Information and PublicationsEmail: ahuvab@kkl.org.il  Phone: 972-2-6583354 Fax:972-2-6583493
Advertisement
Subscribe for our daily newsletter