Havana on the Mediterranean

New salsa club opens up in Tel Aviv, seeking to bring the Israeli scene up to international standards.

By RONEN SHNIDMAN, YONI COHEN
OCTOBER 15, 2010 16:20
Havana nightclub Israel
(photo credit: Yoni Cohen)
Advertisement
Israeli salsa lovers had a rough year in 2010, with the January closing of the much-loved Baliantino club, as well the disappearance of the other major Tel Aviv salsa spot, Hazira, in June after a successful 10-year run.Of course, that means it didn’t take much prompting to check out the grand opening of the new Havana Music Club which, according to the management, is now the largest and most upscale salsa club in Israel.The Havana is situated in a semi-industrial area of Tel Aviv only a stone’s throw from the Azrieli Towers and Hashalom train station. 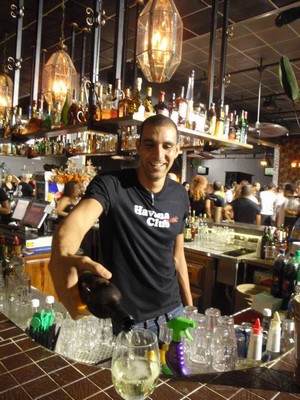 As you get past the cloakroom, the club becomes a surprisingly well-decorated dance hall and bar. The large space has small palm fronds expertly placed to subtly add a Caribbean feel to the atmosphere. The club’s bar area is spacious enough to keep a bartending staff of four busy and provide some room for slacker spouses and dance partners. The bar is well stocked with all the basic drinks and liqueurs you could possibly want. While the young and attractive bartenders don’t seem to be particularly expert in their craft, they certainly manage their keep fairly well, ensuring that you don’t miss the next dance waiting in line for refreshment.But even the newest, hippest salsa club in town cannot escape incorporating a few somewhat humorous, peculiarly Israeli traits.The evening begins with some classes usually starting around 10 p.m. Everyone stands in line and Brazilian samba music takes over the club for a warm-up, and the hip-shaking ensues. Instead of some Spanish-tinged encouragement to motivate everybody, the overly enthusiastic instructor shouts “Yalla, habibi” (“Come on, my love” in Arabic) to get everyone in the mood. The phrase “only in Israel” springs to mind.After this Brazilian version of line dancing, the many instructors at the club hold different classes on the large dance floor for the various levels of salsa competence.The beginner’s class finds itself on the main stage with the instructor, who has the exotic looks of a Latin temptress, encouraging everyone to find a partner as quickly as possible and telling men to “steal” a woman if necessary.Even references to the Israeli army seep into this Caribbean trouble-free zone. In an attempt to explain the most basic move in salsa, which simply involves marching on the spot, the instructor tells everyone “smol yemin smol (right left right), you know, just like you did in the army!” Who would have thought that being an excellent soldier during basic training would give someone an advantage while learning salsa? As the lesson continues and people become more relaxed with the moves and with one another, the instructor starts complicating matters by introducing various twists, turns and spins. This is where the real Latin essence of the dance becomes clear. All the moves have Spanish names such as “dile que no” (tell her no), and it really begins to feel like you could be in some smoky salsa club in Havana and not two minutes from the freeway in Tel Aviv.

As a full house of dancers move across the floor on opening night, British ex-pat Rebecca Lee described the mood well. “I think it’s a really great club. I love the atmosphere. And everybody is having a great time.”Doors open at Havana Music Club around 9:30 p.m. with salsa lessons beginning at 10 p.m. and the party starting at 11 p.m. Tuesday nights are recommended for new and younger dancers seeking to learn salsa; Thursday is the night for classic salsa lovers and longtime dancers; tourists are advised to visit Saturday nights when the party is at its weekly peak and the most talented dancers often come to show off their moves. Entrance fee is usually NIS 40 per person and coat check is available for a small additional fee. Smoking is prohibited at the club, and the rule is strictly enforced.
Advertisement
Subscribe for our daily newsletter