Sculptures melt due to a technical failure; people from all over the country enraged that they weren't informed the attraction was closed.

By GIL STERN STERN HOFFMAN
Disgruntled festival goers stand outside Ice City370
(photo credit: Marc Israel Sellem)
Advertisement
Jerusalem's Ice City festival closed down on Monday as sculptures were melting due a technical failure.A long line of festival goers stood outside the venue, adjoining Jerusalem’s Old Train Station, enraged because they had paid for tickets and had not been informed that the attraction was closed. People came to Jerusalem from all over the country, as far as Dimona and Eilat. 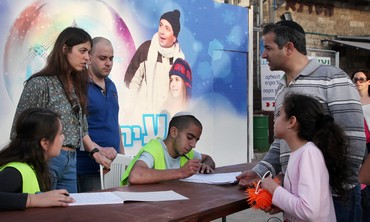 The ticket-seller company Bimot told customers they could return the following week, however, they were unsatisfied with this response since they were due to return to work and school following the Passover holiday. The company also offered reimbursement.People who had turned up at the melting Ice City were angry about having wasting a day and getting babysitters, and were demanding to be able to return the next day to enjoy the event free of charge.   Ice City staff later announced that Monday's visitors would be able to return the following day.Jpost.com staff contributed to this report
Advertisement
Subscribe for our daily newsletter