Mel Brooks wants you have a very Jewish Christmas

The now-87-year-old Brooks is hosting a Jewish-themed Christmas special on live television throughout the day, called “Oy! To the World.” 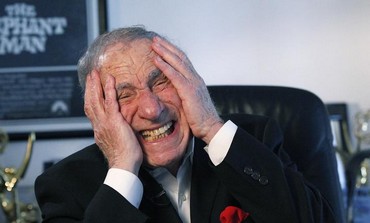 Jewish-American film director, screenwriter, composer, lyricist, comedian, actor and producer Mel Brooks wants you to have Jewish Christmas. Airing today on American Sundance network is the first ever Mel Brooks “Oy! To the World” Christmas movie marathon for Jews.The acclaimed comedy star says its okay for Jews to enjoy Christmas, and the now-87-year-old Brooks will host a Jewish-themed Christmas special on live television throughout the day.He told gossip website Buzzfeed that since his wife was Catholic, he never denied either holiday to his children.“My late wife Anne [Bancroft] was Catholic, and we always had both Hanukkah and a wonderful Christmas tree,” Brooks told Buzzfeed. “I always thought it would be bad to deny a kid either … I think it’s wonderful that you can do both, especially if it’s a mixed family, or if it’s a Jewish family that just wants to enjoy this lovely, festive holiday.”He also told the celebrity gossip site that the holidays are about spirit and not religion, in fact, the only factor religion plays in the gifts are the wrapping paper.“I just change the wrapping,” Brooks confided, noting he doesn’t discriminate between Hanukkah and Christmas presents. “The Christmas ones will be silver and red and green, and the Hanukkah ones will always be yellow and blue and white. And that’s just the way to do it.”Here is the line up for Mel Brook's “Oy! To the World” Christmas marathon: