The ceremony celebrating the year's finest work in film and television honored some of the many Jewish nominees.

The 71st Golden Globe Awards hosted by comediennes Tina Fey and Amy Poehler took place in Beverly Hills on Sunday. The ceremony honoring the year's finest work in film and television kicked off the awards season with some of the Jewish nominees taking home gold. Jewish actors Michael Douglas and Andy Samberg took home Golden Globes, while director Woody Allen was honored with the Cecil B. Demille award for "outstanding contributions to the world of entertainment." Douglas won best actor in a mini-series or picture for his performance as Liberace in the HBO biopic "Behind the Candelabra." Samberg took home the best actor in a TV comedy for his role in "Brooklyn Nine-Nine."

Woody Allen was a no-show, although his aversion to award ceremonies is well-documented. Instead, his friend and "Annie Hall" co-star Diane Keaton accepted the award on his behalf, reading a brief acceptance speech Allen had prepared. “One of the nice things about writing or any art is that if the thing is real, it lives," Allen wrote. "All the success over it, or the rejection? None of that really matters. Immortality via art is not big deal... Rather than live on in the hearts and minds of my fellow man, I’d rather live on in my apartment.” Among the night's big winners were David O. Russell's "American Hustle," starring Christian Bale as Irving Rosenfeld, a character based on real-life Jewish con-artist Melvin Weinburg. The film took home three awards for best motion picture in a comedy or musical, as well as best actress and best supporting actress. 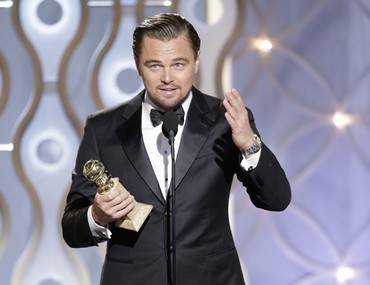 Leonardo DiCaprio accepts his award for

Martin Scorcese's "The Wolf of Wall Street" also had a strong showing, with Leonardo DiCaprio taking home the award for best actor in a motion picture for his depiction of the hedonistic Jewish stock broker Jordan Belfort. While Jewish actors were nominated in most categories, not all of the nominees took home gold. Liev Shreiber of "Ray Donovan" lost out to Bryan Cranston for "Breaking Bad" in the best actor, drama series category, while Robin Wright on "House of Cards" won best actress in a drama series over Julianna Margulies of "The Good Wife." Host Amy Poehler took home best actress in a comedy series for "Parks and Recreation" beating out Lena Dunham for her role on "Girls."