Once I was Avi Nesher

By HANNAH BROWN
JUNE 25, 2010 18:27
avi nesher 311
(photo credit: Courtesy)
Advertisement
For a guy who decorates his office with German posters from Dean Martin’s Matt Helm movies (featuring the Rat Pack front man as a sleazier James Bond), director Avi Nesher talks a lot about redemption.That’s just one of the contradictions about Nesher, and why it can be hard to characterize him and the impact he’s had on Israeli movies. Another is that while he dresses like a kibbutznik in casual clothes and flip-flops, his office is in a beachfront complex near Tel Aviv and features a terrace overlooking the Mediterranean.Meeting to discuss his latest film, Once I Was, which was just released all over the country, he is excited about the movie and eager to talk. But the phone doesn’t stop ringing, and most of the calls concern details of the release. Asking his assistant to handle most of them, he takes a few, apologizing profusely, like a first-time director on the brink of success rather than one of the veterans.“So many people have seen the film already and I keep getting calls about more screenings,” he says, estimating that before the official opening of the film, about 20,000 people saw it at various showings around the country. This is unusual – generally a movie is shown just a couple of times for the press before its premiere. But Nesher is not worried about cutting into potential ticket sales.“The more people who see it, the better,” he says. “That helps word of mouth, it starts a buzz.”It’s not unusual for Israelis to be talking about a movie by Avi Nesher. Nesher first made a name for himself here with the extremely popular musical comedy/drama, The Troupe (Halahaka) in 1979, about an IDF entertainment troupe. It featured an attractive young cast, many of whom, such as Gidi Gov and Gali Atari, went on to become singing and film stars here. Following up The Troupe with several other films, including Dizengoff 99, he decided to head to America.He spent more than a decade there, studying film at Columbia University and then making genre films in Hollywood. The movies, with titles like Time Bomb, Savage, Raw Nerve and Mercenary, starred actors such as Drew Barrymore when she was getting out of her wild-child phase, Showgirls starlet Elizabeth Berkley, not-yet Desperate Housewives star Nicollette Sheridan and Joe Pantoliano (before he starred as Ralph on The Sopranos). They were low budget films by Hollywood standards, but made money.He returned to local screens in 2004, and his film Turn Left at the End of the World became the biggest-grossing movie in Israeli history, selling more than 600,000 tickets. A drama about a teenage girl from India who moves to a development town in the Negev with her family in the 1960s and struggles to fit in with her mostly Moroccan neighbors, it gave a new twist to the Israeli immigrant story by infusing it with style and humor. He followed it up three years ago with The Secrets, a story of redemption and identity in a Safed women’s Bible college, which starred, in addition to young Israeli actresses, the French actress Fanny Ardant. These films 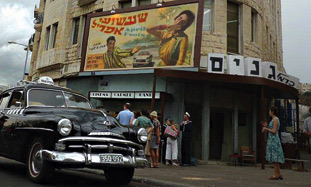