Trash People, a mammoth installation by artist H. A. Schult of figures made from trash, will be on display at Ariel Sharon Park. 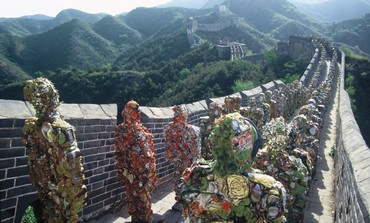 FILM 1. A JEWISH JOKE In the film Jewtopia, Christian O’Connell (Ivan Sergei) tells the girl of his dreams (Jennifer Love Hewitt), who is a rabbi’s daughter, that he is Jewish. Desperate to keep up the illusion, he turns to his best friend, Adam (Joel David Moore), to teach him how to “act Jewish.” But Adam has problems with his fiancée (Jamie-Lynn Sigler) as their wedding approaches. The film is an adaptation of one of the longest running off-Broadway plays.
FESTIVAL

2. ACTION IN JERUSALEM The Jerusalem Art Festival started this week, bringing a host of performance art shows combined with plastic arts to various halls and venues around the city.
Visitors are invited to enjoy a wide variety of events, kids’ shows, concerts, dance shows and much more. A few of the events are held outdoors for the public.
Until April 7. For information and a full program, go to www.arts-festival.jerusalem.muni.il.
ART 3. AN IMPRESSIVE PRESENTATION Trash People, a mammoth installation by artist H. A. Schult of figures made from trash, will be on display at Ariel Sharon Park. After traveling to renowned locations in 18 countries, such as the Great Wall of China, the Pyramids and Red Square, this monumental work is coming to the Sharon recycling park.
April 5 to 30.
MUSIC

8. THE UNFORGETTABLE THREE Celebrating the Batsheva Dance Company’s jubilee year, the company is reviving three of Ohad Naharin’s classic works: Virus, Mamootot and Max. The three pieces represent different facets of Naharin’s innovation as a dance maker.
Mamootot will be performed from April 8 to 12. Max will be performed April 17 to 19 and July 9 to 11. Virus will be performed on May 23, 24, 26 and 27, June 11 to 13,June 25 to 28, and July 22 and 23. For more information and tickets, visit www.batsheva.co.il.
KIDS

9. CIRCUS TO LIGHT AND DELIGHT The Florentine Circus brings water and fire together in the performance of Hinomizu 3, a breathtaking show of international circus artists and acrobats.
April 10 to 22 at the First Station compound, Jerusalem. For tickets, call *6226 or go to www.bimot.co.il.
UPCOMING

10. AFRICAN NEW WORLD Cuban percussionist Pedrito Martinez and his group will bring Latin rhythm for Passover. Martinez’s music has its roots planted firmly in the Afro-Cuban rumba tradition and the bata rhythms and vocal chants of the music of Yoruba and Santeria.
April 17 at the Jerusalem Zappa Club. April 18 at the Tel Aviv Zappa Club. April 19 at the Herzliya Zappa Club. For tickets, call *9080.
Advertisement
Subscribe for our daily newsletter