The Jerusalem Conservatory Hasadna celebrates its 40th anniversary with a concert by the some of the most promising young musicians in Israel. 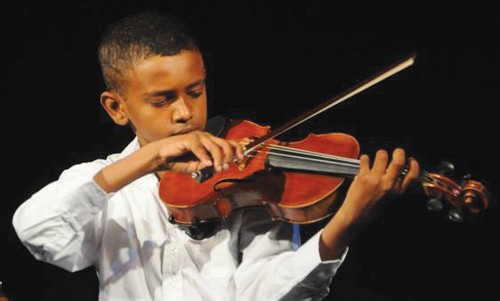 FILM1. DARK COMEDY In a A Long Way Down, a disgraced TV host (Pierce Brosnan), a stroppy teen (Imogen Poots), a failed rock star (Aaron Paul) and the depressed mother (Toni Collette) of a disabled child meet at the top of a notorious suicide spot in London on New Year’s Eve. They all want to commit suicide but instead form a supportive gang, whose brush with despair makes them a subject of interest for the facile and exploitative media world.2. AN INTRIGUING GENREThe 16th annual Docaviv, Tel Aviv’s International Documentary Festival, opens today and will run until May 17 at the Tel Aviv Cinematheque and other venues around the city. The program is varied, leaving no doubt that the documentary is the most interesting genre of movies today.For a full program and tickets, go to www.docaviv.co.il/2014-en/ MUSIC 3. 40 YEARS OF ACHIEVEMENT The Jerusalem Conservatory Hasadna celebrates its 40th anniversary with a concert by the some of the most promising young musicians in Israel. Orchestras, chamber ensembles and soloists perform a musical program celebrating four decades of musical achievement in Jerusalem.Tuesday at the Jerusalem Theater. Reception at 7 p.m. Concert at 7:30 p.m. Admission is free, but tickets must be reserved in advance. Call (02) 563-0017.4. OUT WITH A BANG Israel’s 25th annual Big Band Festival takes place in Kfar Saba from Sunday to Tuesday, featuring dozens of concerts around the city. In the closing concert in the city center, hundreds of musicians from numerous bands will perform Tchaikovsky’s 1812 Overture, complete with fireworks. Free admission.5. PIANO HIT PARADE Winner of the Rubinstein Competition, pianist Alexander Gavrylyuk will perform a recital at the Israel Conservatory of Music Auditorium.On the program are favorite piano pieces such as Schumann’s Kinderszenen, Mozart’s Piano Sonata in C Major and Liszt’s Tarantella from Venezia e Napoli.Friday, 11:30 a.m., 25 Louis Marshall Street, Tel Aviv, (03) 546-6228, www.icm.org.il

Saturday at 8:30 p.m. at the Rappaport Auditorium in Haifa; Sunday at 8:30 p.m. at the Israel Conservatory in Tel Aviv; and Monday at 8:30 p.m. at the Weil Center in Kfar Shmaryahu. For tickets, go to www.cartisiminfo.co.il.ART 7. DISCARDED PIECES OF HUMANITY In Meira Grossinger’s exhibition “Over the Ocean,” the artist explores new and undiscovered realms of pain and solitude. Her installments are created from pieces of textile, furniture and metal discarded by society.Opens today at 8 p.m., until June 7. Florentine 45 Contemporary Art Space, 45 Florentine, Tel Aviv, 050-276- 3249, www.45florentine.com.MIXED 8. HAPPY BIRTHDAY Author Amos Oz is the guest of honor at the Tzavta Theater Kabbalat Shabbat, celebrating his birthday and the publication of Jews and Words, a book he wrote with his daughter, Fania Oz Salzberger. There will be many distinguished guests, and poet Miron Izakson will talk about the weekly Torah portion.