Panama President Plants Tree in the Grove of Nations

The President of Panama arrived in Israel accompanied by his wife and a considerable entourage, which included his Vice President, Foreign Minister and additional high-ranking government officials.

By KKL
MARCH 8, 2010 17:53
kkl
(photo credit: kkl)
Advertisement
“Natural disasters happen, among other reasons, because we are not wise enough to take care of the natural treasures the earth has given us.  We mustn’t destroy forests, pollute lakes and dam rivers, because nature will ultimately demand retribution and force mankind to pay a heavy price for its deeds.  KKL-JNF, through all its diverse activities, makes us understand what we are doing wrong in terms of protecting nature and the environment.  I would like to congratulate KKL-JNF for turning the state of Israel into a better place to live.”  With these warm words President Ricardo Martinelli of Panama described his impression of the scope and quality of KKL-JNF’s activities throughout the state of Israel.  President Martinelli was speaking at a ceremony in the Grove of Nations, where he and his wife planted an olive tree sapling.  So far, thirty-nine heads of state from all over the world have planted trees at the Grove of Nations. 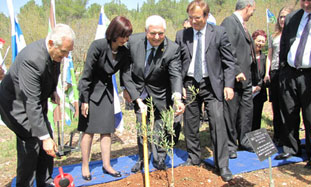 The President of Panama arrived in Israel accompanied by his wife and a considerable entourage, which included his Vice President, Foreign Minister and additional high-ranking government officials.  He was received at the Forest Grove of the Nations by KKL-JNF World Chairman Efi Stenzler and erstwhile KKL-JNF Co-Chairman Mordechai Dayan.  After unveiling the plaque commemorating the planting of the tree on behalf of the state of Panama, there was a short ceremony for the party, which was opened with greetings in Spanish by Mordechai Dayan.  Dayan spoke about the early activities of KKL-JNF in the land of Israel, when no one demanded sovereignty over the land. “KKL-JNF, in its 108 years of existence, laid the foundations for the founding of the state and created the first infrastructures that allowed for settlement and life in a desolate land.”KKL-JNF World Chairman Efi Stenzler mentioned that planting a tree has been a supreme expression of friendship since biblical times.  Although it seems that there is not much similarity between the climates of Panama and Israel, said Stenzler, there is room for establishing collaboration between Panama, Israel and KKL-JNF, with regard to ecological issues, the development and preservation of water sources, and more. By way of example, he mentioned KKL-JNF’s activities in conjunction with arid countries in Africa and Asia, on the one hand, but also with countries rich in water resources such as the provinces of Manitoba and Alberta in Canada, with which there have been close ties to study topics of common interest. Stenzler’s speech was interrupted by loud applause when he disclosed a detail of his family history. “The grandfather of my wife’s grandfather,” he said, “was among the people who built the Panama Canal.  He was from a family that arrived in the land of Israel thirteen generations ago, when the Jews were expelled from Spain.  He was very knowledgeable in the field of water and was eventually appointed to be in charge of Jerusalem’s water economy.”Although he usually avoids discussing politics, Stenzler turned to the President of Panama and said, “Our deep appreciation for you, Mr. President, is not only for the excellent work you are doing for your country, but also for your staunch support of Israel, as we saw when the Goldstone Report was published.”President Martinelli responded, “When Panama was counted in 1948 amongthe 54 states that supported the UN decision on the establishment ofthe State of Israel, we did so because the people of Israel were worthyof having a state of their own, with Jerusalem as its capital.  Thereare no words to describe my feelings on having been given the honor ofplanting a tree in Jerusalem, which is such a beautiful city, where theroots of humanity and the roots of the three great monotheisticreligions are planted. And, since you mentioned the Goldstone Report,my attitude is that his was not a report, but a premature verdict andsentence.  As we see it, a person is innocent until proven guilty, andthis report, which imputes guilt and pronounces a sentence, is simplyunfair.”The President of Panama was presented with a special certificatetestifying to his having planted an olive tree in the Forest Grove ofthe Nations. The entire entourage stood at attention as the Planter’sPrayer was recited by the ambassadors of both states, honoring thePresident of Panama, who had packed the earth so well around the rootsof the sapling. At the conclusion of the ceremony, he was presented aspecial pin by Ambassador Yitzhak Eldan of the Foreign Ministry,signifying the Olive Tree Route, a project established in Israel byAmbassador Eldan for the sake of coexistence and peace.