Hirokazu Kore-eda’s latest film is compelling and watchable, although it deals with a subject that can be quite disturbing. 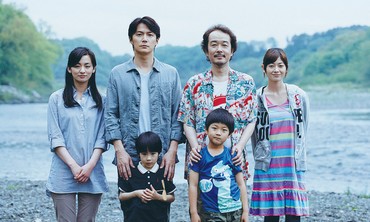 Hirokazu Kore-eda’s latest film, Like Father Like Son, is compelling and watchable, although it deals with a subject that, when taken seriously, can be quite disturbing: babies switched at birth.The film, which won the Jury Prize at the Cannes Film Festival in 2013 and audience awards at several other festivals, looks at the emotional fallout for two families when they go to register their sixyear- old sons for school and discover that the children’s blood types don’t match those of the parents. The director, known for such emotional crowd-pleasers as After Life (1998) and I Wish (2008), uses an attractive and talented cast to find a fresh take on a subject that has been mined by television movies and series ad infinitum.Ryota (Masaharu Fukuyama) is the heart of the story, although it’s a smoothly choreographed ensemble piece. He is a successful urban architect, very driven to succeed and achieve. The only thing he’s ever done that was out of character was to marry Midori (Machiko Ono), a “country girl” from an unpretentious family. But she is beautiful and kind and fits right in with the kind of life he wants. The problem is that their son, Keita, is a disappointment to him. The boy is terrible at piano and, even after attending a cram school, barely gets accepted to a prestigious elementary school.When the school notifies them that Keita is not biologically theirs, they quickly contact the family who has their child. It turns out their son has been raised by a lower-middle class couple (Yoko Maki and Riri Furanki) who own an appliance store in a suburb.The appliance store owners, who have two other children, are more fun, more relaxed and warmer than Ryota and his wife. The two families spend time together, and a bond develops between the wives. These storekeeper parents are understandably offended when Ryota offers to take their son away and raise both boys together in a wealthier, culturally rich environment.But apparently in Japan, where rules are rules, everyone “switches” the children when this kind of mix-up happens. Midori is torn apart by having to give away the child she has raised and loved, although she does her best to be loving to the new boy in her life.Keita is actually quite happy with his new family and enjoys playing with his brother and sister and being allowed to quit piano lessons.Ryota should be delighted with his new, brighter son, but somehow the relationship isn’t as smooth as Ryota had dreamed.That’s the real drama here: How he reexamines the love he has for the boy he always believed was his, and how he begins to see himself in that child.The movie has no histrionics, no big shouting scenes as an American film on this subject surely would. The director tells the story in small details. For example, the lower-class family all chew on their straws the first time the two families get together at a food court, and Ryota’s brief glance at their cups tells us all we need to know about his feelings for the family and their lifestyle. We also see Ryota’s difficult relationship with his own father and how he is in some ways a self-made man, who pushed himself and dreamed of a better life for his son.Masahuru Fukuyama is the standout in a wonderful cast.While at a certain point you may want to stand up and scream, “Do they really have to switch them?” if you can accept that premise, then Like Father Like Son is a satisfying, if low-key, drama.
LIKE FATHER LIKE SON
Written and directed by Hirokazu Kore-eda
Hebrew title: Sipur Mishpachti
Running time: 120 minutes In Japanese.
Check with theaters for subtitle information.
Advertisement
Subscribe for our daily newsletter