The name 'Aria' is originally an opera term and means a song to accompany a solo voice. Chef Gamzu is the conductor of flavors as Aria Restaurant and Bar.

By REBECCA FRIEDMAN
MARCH 20, 2014 18:29
Aria
(photo credit: REBECCA FRIEDMAN)
Advertisement
The name Aria is originally an opera term and means a song to accompany a solo voice. Chef Guy Gamzu believes that each component of his restaurant and bar has its own aria, from the bartender who mixes the intricate cocktails to the waiters that serve his food.All I had ever heard about Aria Restaurant and Bar was that it was one of the best new places in south Tel Aviv, a delightful eatery that was sure to soar past the extreme competition in the area and be one of the best places to get a delicious contemporary meal. Chef and owner Gamzu’s rich culinary background has influenced his impeccable cooking. His mother's family moved from Morocco, to France, to Egypt and then finally to Israel, gradually gathering bits and pieces of culinary culture from each country into a collection that became "mother’s cooking" and was eventually passed down to him. His father was from Iran and his taste in food influenced the family's palate as well. He says he has always loved the kitchen – he has been working in restaurants ever since he was 15 years old and has dreamed of opening his very own one day.Aria is the realization of this dream. Designed by friend and partner Oren Heckney in rich dark grays and blacks with light grey bricks and white walls, it is a delight to sit in. The tan and gold accents shine in the dimly lit rooms, lending a soft, romantic ambiance. Located on Nachalat Binyamin, the building was originally the house of Yonah Solomon, creator of one of the first moshavot, but abandonment turned it into a squatter house for drug addicts and homeless people for over 20 years. Now the bar on the first floor and the restaurant upstairs attract a very different clientele - young Tel Avivians looking for a night filled with a variety of musical entertainment and the highest quality food. 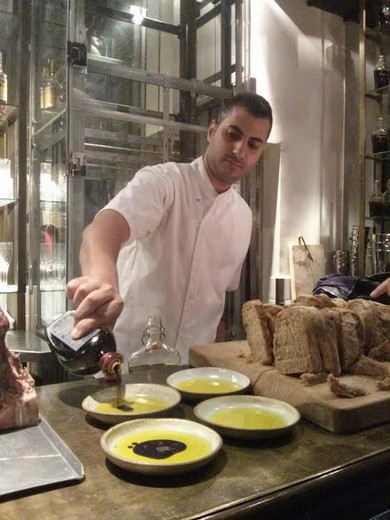 The food at Aria is the most unique part of the entire experience. Gamzu's goal is to "upgrade" classic historical food into fine cuisine – using only the best of the best modern ingredients he transforms the simple traditional recipes he grew up with into present-day gourmet versions of their cultural counterparts. For example, the sirloin and charred vegetables on tehina that was served to our group was an old Arab recipe ‘spiced up’ with a few contemporary changes. The tehina, usually made with water, was made with yogurt to create a richer, more satisfying taste; and the vegetables were cooked with Gamzu's own new and unique blend of spices that he painstakingly mixed to perfection himself. Gamzu takes the time to gather only the very best ingredients from all over the country which is one reason his food tastes just so delightful. He also changes the menu according to seasons of available ingredients to ensure that everything is fresh and natural.The bar is set up attractively. There is a display-wall of matured drinks and cocktails, along with classic bar beverages, lining one side of a cozy room with a small stage in the center for performances, live and otherwise. Music ranges from live instrumentals to DJs and other types of productions. Aria began running just nine 9 months ago. The restaurant opens its doors in the late evening; Gamzu explains that this is to test theories and ensure that he knows everything about his clients and what they look for, about the business in general and the culinary competition in Tel Aviv specifically, and anything else involved in running a successful eatery and bar. Already though, many celebrities have passed through his doors and special events are hosted there two or three times a week. From the bartender who mixes the intricate cocktails to the waiters that serve his food, to the piece of marbled steak waiting to be marinated and cooked, even to the simplest spices gathered in the kitchen, every component of this Tel Aviv venue is an operatic masterpiece. Chef Gamzu is the conductor that blends every solo together to create the one beautiful symphony he calls Aria Restaurant and Bar.

The writer was a guest of the restaurantAria
(Not Kosher)
Nachalat Binyamin 66
Tel Aviv
035296054
www.ariatlv.co.il