Ask the Barman: Taking tips from the Greek god of wine

Eyal Dobinsky explains how he uses his wealth of knowledge to bring fine reds and whites to the masses at his intimate TA wine bar, Juno.

By YONI COHEN
Eyal Dobinsky Juno 311
(photo credit: Yoni Cohen)
Advertisement
Even though Eyal Dobinsky spends his days, or more accurately nights, serving alcoholic drinks to the discerning clients of his north Tel Aviv wine bar, he insists that he is not, in fact, a barman. With years of experience on California's famous wine road touring wineries and improving his vast knowledge, Eyal sees himself as a representative of the people on a mission to bring good quality wine to the public at reasonable prices. His confidence, along with his effortless explanations of some of the best wines on the menu, confirm that he knows what he's talking about. Eyal, a citizen of the world, lives for wine and wants to share the love. He took a break during a busy night at “Juno,” the intimate war bar that he runs, to speak about why wine should be drunk and not just stored, as well as how he draws inspiration from the Greek god of wine. 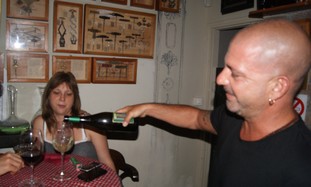 Eyal Dobinsky
Do you enjoy your work as a barman? I don’t see myself as a barman. I am more of a wine expert.How did you get into the wine industry? I was actually on the [California] wine road for eight years where I learned so much about wines.  How long have you been at Juno? Three years. What made you want to open the wine bar? 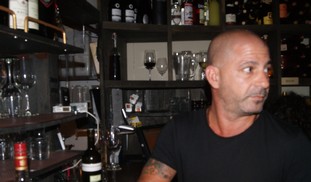 Eyal Dobinsky
Well people in restaurants usually charge a lot of money for wine and this really annoyed me. I think it is more important to make wine easily accessible to people. So was that the main idea behind the project? Well, it wasn't actually my idea; it was never my dream. My sister-in-law encouraged me to do it and I pursued the idea. Even though it wasn’t your idea, do you enjoy it? Yes I love it. It makes people happy so therefore I am happy. I think that wine should be drunk and not just stored. Okay, can you explain that a little? (Pointing to a very striking painting of Bacchus, the Greek god of wine placed proudly on his wall, Eyal explains that Bacchus used to drink wine like an animal.) This is how it should be done! The idea of this place is to drink wine without thinking about the score of the wine. I think a lot of people only collect wine for the score and don’t care about actually drinking it. I think the taste should define whether you like it or not. 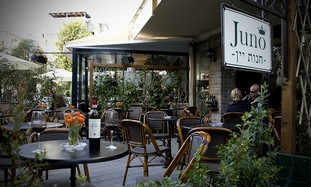 Juno wine bar
What is your favorite wine to serve? I prefer Italian wines because they aren't cheap but are still good value for money. If you want a French wine then you will have to pay at least double. What do you like about your job the most? To give the customers something that they have never tasted before. I love knowing that I have introduced a new wine to someone and then they come back and order it again. Then, my work is done. What are your thoughts on Israeli wine? I think they are overpriced. 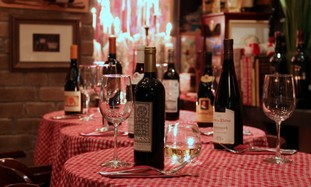 So you would you recommend them? No. I would actually recommend more New World wines from South America and Australia. Do you have to pay a lot of money for a good wine? Definitely not. A good wine can be the cheapest wine on the menu. If someone likes something, then they like it. End of story!Juno - 1 De Haas, Kikar Milano, Tel Aviv.Sunday to Thursday 5:00 p.m. till midnight. Friday 12:00 p.m. till midnight. Telephone: (03) 544-6620.
Advertisement
Subscribe for our daily newsletter