Sushi in the City

Though varied in décor, style and menus, all four restaurants truly are exceptional.

By DOV PREMINGER
JUNE 18, 2010 19:29
bluefish platter 311
(photo credit: Courtesy)
Advertisement
The 100th sushi restaurant recently opened in Tel Aviv, making the city the world’s third-largest sushi center per capita, after Tokyo and New York. I surveyed the reputedly best sushi establishments in Tel Aviv, and the top four are presented here. For a spectacular dinner out and for the sushi mavens out there, let this be your guide.We asked these restaurants to let us sample their finest and wildest dishes to get a sense of what’s out there. Though the restaurants aren’t kosher, no shrimp, lobster or other denizens of the deep were savored for this review.We also tried a few common rolls, such as the spicy tuna and the rainbow roll, both of which are familiar to most sushi fans.Though varied in décor, style and menus, all four restaurants truly are exceptional.Onami
Ha’arba’a 18
(03) 562-1172 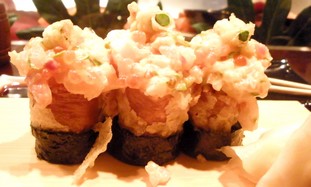 Onami Sushi
Considered by many to be the best sushi restaurant in Tel Aviv, Onami is worthy of its rank. It is located in the city center, close to Dizengoff and King George streets. A must-order dish is the Inari special. Named after a Japanese god, it is a veritable mountain of fried-tofu pockets filled with rice, asparagus, spicy mayo, amberjack fish and kiwi (when in season). If you can eat it all in one bite, consider yourself a true sushi expert.Onami has a softly lit, elegant atmosphere, with dark wooden tones giving the place a classic air. But, of course, this is Israel, so feel free to wear your blue jeans.The first thing we tried was a salmon-avocado cocktail, which is presented as a minced-salmon cake made with soy sauce and wasabi crunch. The second appetizer, which we preferred, was Onami’s renowned agedashi tofu. It is made with nameko mushrooms and served with a tangy sweet sauce.A lot of the good dishes at Onami aren’t strictly sushi. For example, on the menu is a flower-shaped seared fillet of beef served with onions and ponzu dipping sauce (soy sauce with a fresh, tangy citrus flavor).Expect to pay about NIS 150 per person.Kyoto Sushi Herzliya
Shenkar 7, Herzliya
(09) 958-7770Not quite in Tel Aviv but close enough, Kyoto Sushi Herzliya is highly regarded for its wide variety of sushi, said to be the most varied in the country. The restaurant is located in the business district and is decorated in a modern style, including dark shades and softly lit yellow lamps. On the Thursday afternoon that we were there, the place was packed with what I assume were business power lunchers. American-style 1950s music was playing, giving the restaurant a relaxed atmosphere. Some real advice: No power lunching, only slow lunching here.As I always say, never skip the appetizers at a sushi restaurant, as they’re often the best part of the menu. And Kyoto proves it with a sashimi trio of tuna, yellowtail and salmon wrapped up and bathed in a tangy vinegar and sweet chili sauce. The other appetizer, blue lagoon tuna, was my favorite dish. Giant horizontal sections of bluefish deep fried in tempura for 30 seconds gives it a crunch on the outside and a sweet rawness inside.We tried progressively more eclectic rolls, starting with the crazy spicy Chicago, then on to the sunshine roll, and lastly the ever-popular rainbow roll, a tuna roll layered with a colorful array of fish.Expect to pay approximately NIS 150 per person.Sushi Samba 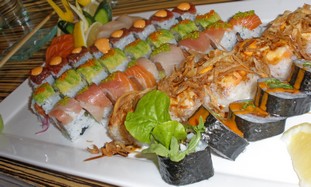 They say the quickest way to tell the quality of a sushi restaurant is by its wasabi. The hot Japanese horseradish was great at all four of these restaurants, but the best was at Sushi Samba. It was also the first place where I encountered Choya plum wine, a deliciously sweet white that I have enjoyed several times since.Samba serves a fusion of Japanese, Brazilian and Peruvian cuisine, giving its sushi a distinct taste and signaling that the restaurant has a lot more to offer than just sushi. Sushi Samba is popular worldwide, with locations in New York, Chicago, Miami and Las Vegas, as well as Tel Aviv.Samba is paneled in a myriad of festive colors, with stained glass-style reds, blues, oranges and greens decorating the walls above the bar. An exterior patio offers al fresco dining in Tel Aviv’s reliably good weather.Samba rose to the challenge of “the wildest sushi” title with a sampler of toro sushi, made from the most prime, fatty part of the fish. The toro, which is a delicate shade of pink, is prepared in raw sashimi-wrapped maki rolls, seared with sweet sauce and minced and topped with a quail egg. This was my personal favorite. It’s known as the best cut of fish for a reason.For the main course, a sumptuous array of sushi showcased Samba’s sophisticated style. The neo Tokyo roll proves Samba’s fusion flair with yellowfin tuna, tempura flakes and aji panca Peruvian red pepper. The TLV roll, mamushi salmon and el topo were served as well, the latter made of salmon, jalapeño, shiso leaf and melted mozzarella in a hako-style box. Samba also serves a traditional sushi roll topped with seared entrecote beef instead of fish, proving itself as a true South American-Japanese fusion restaurant.Expect to spend around NIS 150 per person for a meal.Yakimono
Rothschild 19
(main location)
(03) 517-5171
Kosher location:
Hilton Tel Aviv
(03) 520-2222Situated on Rothschild, Yakimono is designed in contemporary shades ofblack and white, with a full sushi bar and an accompanying tank thatcontains all the various sea creatures offered on the menu.The restaurant makes a special goma sushi – partially fried rice ballstopped with fish and a tahini-based sauce that is splashed in starshapes on the edges of the plate. I was a little hesitant about tahinisushi at first, but it’s light, sweet and delicious.Perhaps my favorite dish at Yakimono’s was the sashimi salad, which ismade of slices of salmon, yellowtail and tuna sashimi layered overfresh vegetables and delicate glass noodles.The prices at Yakimono are the steepest of the four, with rolls ranging from NIS 60-80 per serving. Expect to spend about NIS 200 per person.
Advertisement
Subscribe for our daily newsletter