By JESSICA HOCHSTADT, KASSANDRA GRUNEWALD
MAY 21, 2012 14:22
Malabi 370
(photo credit: Jessica Hochstadt)
Advertisement
Kassandra Grunewald is the Co-Founder of TasteTLV. TasteTLV is the ultimate culinary guide for dining in Tel Aviv.When you hear “authentic” Middle Eastern food, a few images come to mind. However, when you hear “authentic” Israeli food you come to expect a heated discussion of what exactly that phrase means. It all comes down to the origin and, for better or worse, authentic Israeli food is a hodgepodge of recipes from all over the globe. It's clear to see how the cultures coming to Israel have forever shaped the cuisine in glorious ways. We love the authentic dishes of Israel, and even more so the different renditions that pop up in different areas of the world. For each food there are at least a few popular variations of the same basic elements. Most importantly, “authentic” Israeli food is more than just felafel and shwarma. Below you will find some mouthwatering authentic choices that you can find all over Israel.Malabi 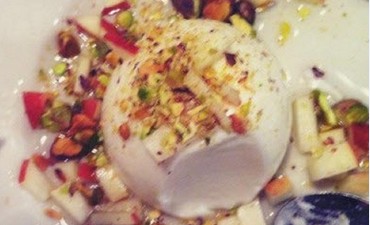 Malabi (Judith Goldstein )Malabi is a milk and flour-based custard that can be found anywhere in Israel, from upscale hotels to outdoor market side-streets. This is a refreshing dessert in the summer or winter, for children and adults alike. Malabi’s sweetness comes from the rose-water used to prepare it. It's often topped with fresh ingredients like coconut shavings or chopped nuts, which adds a crunchy texture to the otherwise creamy delicacy. Malabi is a traditionally Middle Eastern dessert, although there is no consensus as to its exact origins within the region. Turkey, Lebanon, Syria, Jordan, Egypt, and even Greece all have their own version of this common dessert. Malabi is easy to make. But for a home-made taste and authentic Israeli experience, try the sandwich stand in the The Carmel Market. Take your first right within the market; when you come upon the gray-ponytailed man at the silver sandwich stand, ask him for his best Malabi. Inside scoop: One of our favorites at a restaurant is the Malabi at Gadera 26. This delicacy balances the elements to bring you a creamy and sweet custard for any time of year, but especially on Shavuot.Matbucha 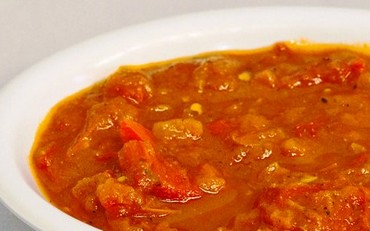 Matbucha (Jessica Hochstadt)Whether you call it matbucha or "Turkish salad", expect to see this dish at almost every Israeli table. The base of every matbucha salad is cooked tomatoes, bell peppers, garlic and onions. Of course, different versions sometimes include other vegetables and garnishes like onions and parsley. Matbucha is usually served as an appetizer or a dip for bread, pita, or vegetables, and complements any humous dish. Although matbucha recipes are as abundant as the different ways you can eat them, sometimes the best matbucha is available in local groceries! The company "Achla", which from Hebrew translates into "wonderful" does make an great matbucha. Of course, the opportunity for good matbucha is endless in Israel.Inside scoop: We love the matbucha at Falafel Gabbi on Bograshov, as this food is often so delicious in many unexpected places.Jachnun 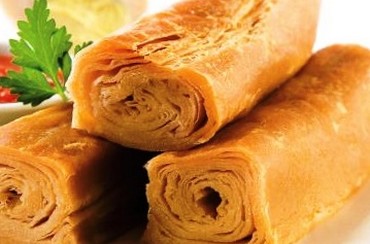 Jachnun (Jessica Hochstadt)Jachnun is a meticulously prepared Yemenite bread, incomparable to any roll or pastry you’ve ever tasted. Although it looks like an eggroll, the only thing you will find inside is more savory dough. Jachnun is prepared by thinly rolling out a ball of dough until it's paper-thin. Next, the dough is folded over and rolled into a doughy log, each layer separated by a smear of margarine. A true labor of love, jachnun is baked at very low heat for approximately ten hours. It is traditionally served with a boiled egg and s'hug, a crushed tomato sauce. Although the best jachnun comes from the worn fingers and home kitchen of any Yemenite woman, it's much more easily accessible in many parts of Tel Aviv. Inside scoop: For a late night snack, try “Jachnun Shel Ima” (Mother’s Jachnun) located on the corner of Allenby Street and King George. Kubbeh 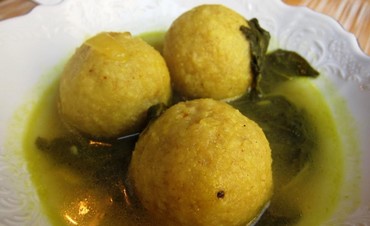 Kubbeh (Judith Goldstein)Though there are many ways to spell this dish, they all sound alike. The Arabic word kubbeh means ball - maybe not the most appetizing name for an edible item, but it makes a lot of sense once you feast your eyes on this authentic Middle Eastern dish.This absolute treasure is usually made of burghul, minced onions and ground red meat, most likely beef, lamb, or goat. The outside crust encases the aromatic meat and spices and is shaped into torpedo's, balls, or patties and is then baked or cooked in a broth of some sort. The dough and meat may vary from dish to dish as well as the broth, which is determined by the chef. The most popular broths are vegetable or beet, which turns the balls a bright magenta. In Israel kubbeh is a staple among many cultures and can be found in various types of restaurants. Inside scoop: We love the kubbeh at Gadera 26. Although this version is delectable, there are many varieties out there worth a mention. Kebab 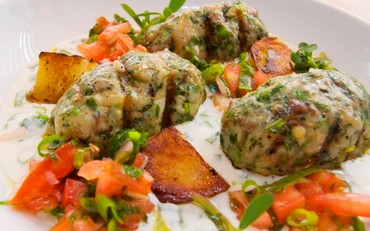 Kebab (Jessica Hochstadt)Kebab basically takes the place of a hamburger in popular Israeli grill outs. They look like oblong meat sticks packed with onions, parsley, and other spices. Kebab is normally made out of ground beef and grilled over an open flame; however we see many varieties of this treat. As it is so very versatile, the kebab has become part of everyday cuisine in many countries around the globe. A typical kebab is made by mixing ground meat, onion, salt, pepper, parsley, turmeric, and seasoning, until the mixture becomes smooth and sticky. An egg is added to help the mix stick together. A nectarine-sized portion of meat is then pressed around a skewer and cooked over an open flame. Although there are amazing renditions of this dish, it's always worth it to take a trip up north and enjoy some kebabs and other meat dishes.Inside scoop: The not-so-authentic, but very creative and delicious Fish Kebab from Hadar Haochel puts a fresh and tasty spin on the kebab as we know it.Jessica is currently an intern for Taste TLV. Jessica Hochstadt was born and raised in Miami Beach, Florida, where she was lucky enough to grow up with a mixture of Brasilian, Cuban, and Jewish cuisine.Follow @JPost_Lifestyle