A new column: Food enthusiasts at Taste TLV give their verdict on the best that the Tel Aviv dining scene has to offer.

By JUDITH S. GOLDSTEIN/ TASTE TLV
Par Derrier 311
(photo credit: Courtesy)
Advertisement
Judith S. Goldstein is the Co-Founder of TasteTLV. TasteTLV is the ultimate culinary guide for dining in Tel Aviv. With Succot in full swing there is nothing like celebrating this special holiday, which is centered around nature, festivities and good food, outside in a blissful atmosphere. Tel Aviv might seem like a concrete maze at times, but there are no shortage of places that will pull you out of the daily hustle to provide a bit of zen. With restaurants, wine bars, and cafes that have some of the most beautiful courtyards and gardens, it’s hard to narrow it down to only five, but here is our list of the outdoor spots that nurture from within and give you a taste of the prettier side of the city. 1. Par Derrier     Sneak away into this wine bar and you’d never know that the grimy streets of King George are only a few steps away. In this enchanting garden you are surrounded by beautiful plants and mystical trees. Wooden bars, clunky chairs, and walls filled with glimmering bottles of wine, give it a rustic feel, as if you’ve been whisked away to the middle of wine country. Each corner and hidden nook give it a private feel as if in your own secret garden in the center of the city. You don’t have to close your eyes at Par Derrier, because you’re already in a fantasy world. Food: The menu is simple and the dishes are meant to complement the long and sophisticated wine list. Small salads, light bites, and cheese plates deck the menu and a simple Bruschetta is a perfect accompaniment to a glass of Flam Cabernet Sauvingnon. King George 4, Tel AvivTel: (03) 629-21112. Vicky Cristina 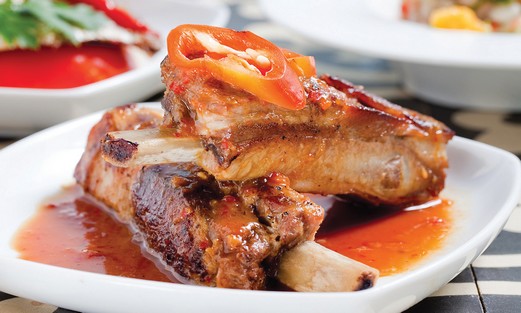 Here in one of the most historical areas of Tel Aviv, old meets new and Vicky Cristina embraces all of The Tahana's magic. The long deco tiled bar tables fill the vast outdoor area, while branches of gigantic old trees dangle over the table tops like nature's own chandeliers. The place is electric with the energy of the city and the passion of romance and history. Food: Catalan inspired tapas dishes are served with a Mediterranean twist; think patata bravas with tangy red pepper infused sauce or smokey beef ribs. Hatahana, Building 7, Koifman 1 Neve Tzedek, Tel Aviv, Tel: (03) 736-72723. Manta RayAs close to the beach as you can eat while feasting on fresh, succulent seafood, Manta Ray in one word is nothing short of breathtaking. Set against the shore of the Mediterranean Sea, here you can sit and take in the wondrous beauty of Tel Aviv as the sun glistens against the water and the waves break into the shore. Manta Ray is one of the most prestigious & talked-about eateries in Tel Aviv. This is a great place to take business clients or family to celebrate special occasions. The wait staff here take their job very seriously, and Manta Ray proves to hove some of the best service in Israel.Food: Manta Ray has a wide assortment of seafood dishes, such as salmon with gnocchi or mixed seafood platter. There are also several non-seafood options on the menu. However, nothing beats their home-made bread and their daily selection of meze dishes. Large platters are filled with several daily meze dishes, some of which include the silky eggplant dip and the tuna ceviche. It’s fun to pick a few and share among your group. Almah Beach, Tel Aviv (across from the Dan Panorama Hotel) (03) 517-47734. Pua 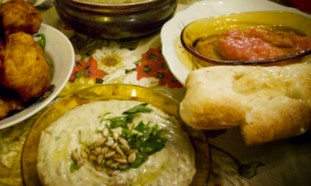 Eclectic, funky, and simply sweet, Pua embraces everything there is to love about Shuk Hapishpishim (The Jaffa Flea Market). All the mismatched tables, chairs, knik knacks and pictures on the walls, come straight out of the market complete with price tags, so if you fall in love with the furniture as much as the food, you can make it yours and take it home with you. Whether you’re sitting outside of Pua on a big, chunky couch or on a diner chair from the 1950’s, you’ll experience all the mystery and excitement of the flea market. The sites, colors and sounds are filled with all of the diversity of this great city and Pua gives you the opportunity to really savor your surroundings. The restaurant itself is over ten years old and has a wonderful history of humble beginnings. Food: The menu at Pua is as interesting and homey as the atmosphere. The Middle Eastern-inspired menu is full of vegetarian dishes, hearty meat dishes, pastas, risottos, and salads. Their signature homemade green tehina is rich, creamy, bold and toothsome. Rabbi Yachanan Street 3, JaffaTel: (03) 682-38215. Sonia Getzel Shapira 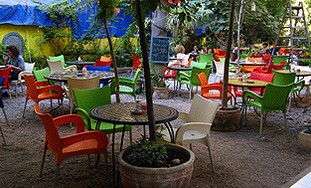 The entrance to Sonia Getzel Shapira might be small and humble but as soon as you step into the large back foyer, your mind is put at ease. A large, secluded garden is filled with a stone lined floor, colorful chairs and round iron tables. You eat your breakfast to the sounds of birds chirping and the glimmer of the sun peaking through the trees. It’s a delightful place to start your day. Imagine sipping a glass of pristine iced tea with your eyes closed, now imagine a garden of eden, yes, that would describe Sonia’s on a sweet summer day. The staff are very friendly, which is great since you may become a fast regular.Food: Sonia Getzel has a fun selection of breakfast and lunch dishes. They do a few variations of the traditional shakshuka. For a bit of a twist we recommend the Mexican shakshuka, it packs a bit of heat to your morning. Simta Almonit Street 1, Tel AvivTel: 057-944-2801Judith studied Middle Eastern Politics at the University of California in Santa Barbara. She has worked in the hospitality and culinary industry for 10 years.
Advertisement
Subscribe for our daily newsletter